ASP.Net on a Roll

With all of the buzz about Ruby on Rails and AJAX, not a lot of people have noticed that Microsoft is making another really good run at the web development space. Based on book sales data, it looks like ASP.Net 2.0 is on fire, with ASP-related book sales up 53% since the same period a year ago, versus PHP, down 3%, and JSP, down 25%. Of course, Ruby on Rails didn’t exist a year ago, and it now represents a market that is 1/6 the size of the PHP and ASP book markets, and all that generated by a single book (versus 50-60 titles each for PHP and ASP.) Still, our numbers indicate a *lot* of enthusiasm for ASP 2.0.

What’s particularly interesting is the way that Microsoft is reaching out to attract PHP, JSP and Cold Fusion developers. They’ve engaged both O’Reilly and Dr. Dobb’s Journal to co-produce an ASP 2.0 training center, on the theory that we’re going to be better than they are at reaching out to non-Microsoft developers. And rather than just the usual product pitches, they’ve actually asked us to provide information on interoperability between these various web programming toolsets. (As an incentive to get folks to try ASP.Net 2.0, they’re also offering a free copy of Visual Studio 2005 to anyone who listens to three of the webcasts they’ve put on the site.)

The book sales data I referred to is from our research data mart, which includes data from Nielsen Bookscan‘s point of sale data service, plus other information we’ve spidered off the net. One of the principal visualization tools we use is a treemap, in which the size of a square represents the relative size of a category, and the color represents the rate of change (green for up, red for down, black for unchanged, with the intensity proportional to the rate). Here’s the treemap showing sales of books on web development technologies compared to a year ago. (Note that this treemap doesn’t just include server-side development technologies like ASP, JSP, and PHP, but also pure client side technologies like Javascript — which, due to the AJAX phenomenon, has jumped even more radically than ASP.) 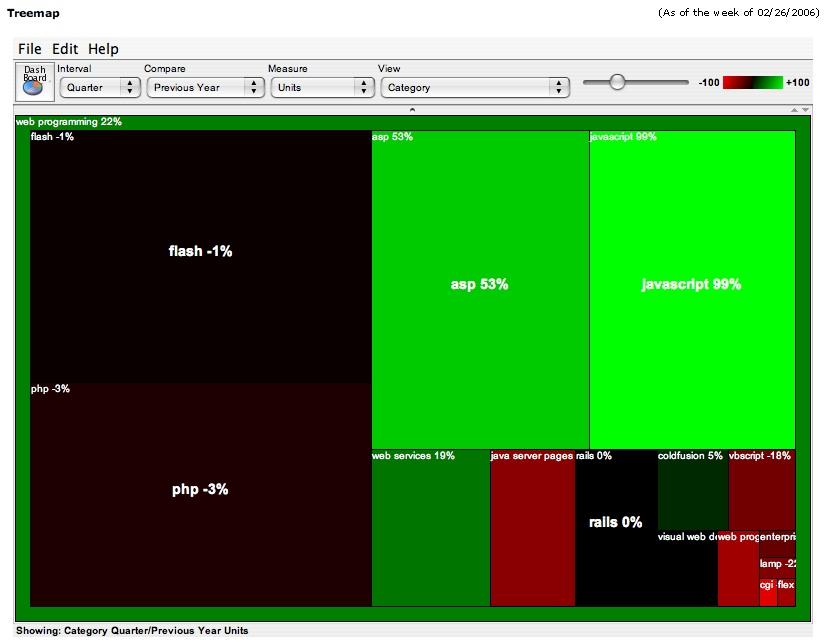 See Book Sales as a Technology Trend Indicator for a more detailed description of our technique.

I’d be really interested to hear from PHP and JSP developers who do try out ASP.Net 2.0. Does Microsoft really have something here? Or is it still just a product that is going to be adopted only by the Microsoft developer community. They are paying attention. I’d love to see some effort paid to giving them some substantial feedback on their interoperability efforts, and the product in general.

These are interesting times for Microsoft. They are no longer the undoubted king of the hill, and like IBM before them, they are embarking on a brave new voyage of exploration of what it means to be part of an ecosystem rather than just the top predator in it.