I just sat in on a talk at FOSS4G by Pat Cappelaere about a new Open Source project called GeoBliki. As you may guess from the name it’s a blog-wiki application that is tailored towards geospatial collaboration. The project was inspired by some of the issues that came up around data sharing when Katrina struck. The goal is to provide first-responders immediate access to relevant geodata and a platform to collaborate on. Here is a description of GeoBliki in the project owner’s words:

A GeoBliki is an Open Source Ruby-on-Rails application that integrates many other
open source components including Community MapBuilder and supports many of the OGC
web services: WFS, SAS, WNS, SPS, WPS…

A GeoBliki is a sensor-data node publisher. Data can be published in various forms,
which can be made accessible to local or remote users for free or for a fee. Users
can register to existing subscriptions around areas of interest and be notified via
email/IM or GeoRSS feeds when new data, comments/annotations on the existing data
become available.

Local users can access the data blog and/or the geo-wiki. The blog gives a
chronological perspective of the data while the geo-wiki allows for hierarchical
views based on user-driven topics or specific geographic features of interest. Users
are encouraged to interact with the data and/or other users about the data. Chat and
forums are built-in. Map/data annotations will be coming very soon.

The initial sensor input will be coming from Earth Observing-1 (commonly known as EO-1), a NASA satellite. Over time they will able to add other such as Terra, Aqua, and other existing satellites. Right now the acquired data is earmarked for scientists and disaster-relief efforts, but hopefully the data will be shared more broadly over-time.

This is a Ruby project that is leveraging a lot of existing OS software to bootstrap the product. Typo (an RoR blogging tool) is being used to publish GeoRSS – part of the beauty of using an established blogging platform is that they can leverage the existing blog syndication ecosystem for notifying their users as data becomes available. Hieraki is providing the wiki functionality. WildFire, an XMPP server, is being used for notifications. The maps are being built with Community MapBuilder. RForum is being used to provide discussion forums – specifically around the quality of the data.

They also built a social networking component which Pat credits O’Reilly Connections for providing some inspiration. People label themselves and then point to other people whom they trust. Building an ad hoc community quickly is very important for first-time responders who may need specialized knowledge and skills to get help on their project. He is hoping that the tags aid in this.

One of the biggest issues that they are trying to tackle is how to handle identity. Currently, OpenId is the front runner as they need to be able to support trusted persons and organizations. Users of the application not only have access to the acquired data, but they are also able to task the satellite to target specific areas, because of the sensitivity of this their needs to be different permission levels.

The project is due out in 12/2006. It is being sponsored by NASA, Goddard, Naval Research Lab, and OGC. The source code will be hosted on geobliki.com (not much is there right now).

Screenshots are on the full page.

Typo being used as a GeoRSS distribution platform. 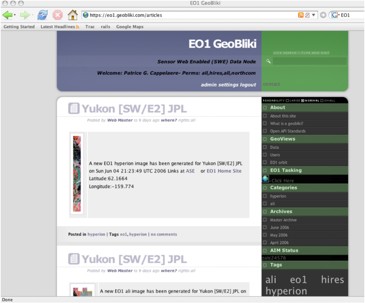 The maps (with imagery callout) as built by Community MapBuilder. 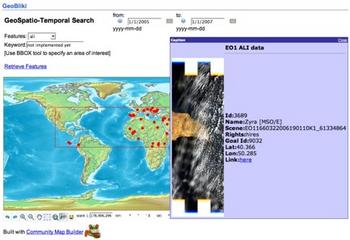 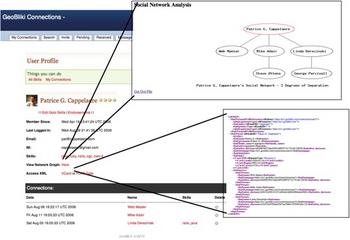