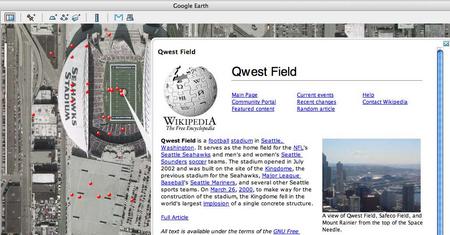 Google Earth has released some new layers that they are calling the Geographic Web. When turned on, these layers display icons where they have relevant, geotagged information to share. The layers include information from Wikipedia, Panoramio, and the Google Earth Community. These layers have been added automatically.

I find the Wikipedia layer especially useful. It displays photos and an excerpt from a geotagged article. The geotagging is the result of the site-wide WikiProject Geographic Coordinates; you can see the the geotags in the top-right corner of Wikipedia pages. This seems to be just a further integration point between Google and Wikipedia. Google already supplies their search (along with Yahoo!) and uses Wikipedia’s content for some inline answers.

The Panoramio.com layer is also useful, showing geotagged photos taken by its users. The new, Spain-based photo-sharing site just passed their 100,000 photo mark on December 10th. The site has an emphasis on geotagging photos and maps views. Though fairly sparse, the photos are generally high-quality. Prior to their direct inclusion in Google Earth, they had released a KML feed for their site and received assistance from Keyhole founder/Google Earth GM John Hanke. Getting this attention from Google is definitely a lucky break for the startup!

When I read the news about the new layers my immediate thought was where’s Flickr? They’ve added geotagging, why don’t I have a KML feed for my photos, my contacts, tags, or the world’s photos? Using Google, I was able to find Metal Toad Media’s Flickr Layer that displays all geotagged photos in an area. Each of the red dots in the screenshot represents a Flickr Photo; as you can see from the red-dot fever you can find a Flickr photo almost anywhere.

I communicated with Dan Catt, Flickr employee, Google Maps Hacks contributor and blogger at Geo Bloggers. He pointed out that “Google Earth’s network links automatically passes over the current bounding box as a URL parameter to whatever it’s connecting to using the parameter bbox=x1,y1,x2,y2. Flickr’s search API for geotagged photos take the parameter bbox=x1,y1,x2,y2 to define the bounding box. The only step missing is for either Flickr to output KML natively, or Google Earth to parse geoRSS.” Personally I would take either! If Google Earth consumed geoRSS then geotagged blogs could be viewed as well. I hope Google Earth (and the MS browser-based competitor, Spaceland) take these steps.

This is yet another reason to get a location-aware camera (or mod the one you have). Here are some options for you.