bLink: Completing the Connection Between Analog and Digital

This morning’s keynote speaker at TOC, Manolis Kelaidis, received a standing ovation as he described his project to integrate digital content into physical books via circuits printed in conductive ink on the same page as the text. From the description of his session:

Books have inherent qualities that make them an irreplaceable medium, even today. They have survived unchanged for centuries and are one of the most familiar and bestselling products we know. For a particular type of user experience they simply have not been bettered. Digital media (portable devices, touch-screens, etc.), however, has been offering seductive new possibilities to readers, especially in terms of interactivity.
Can these two worlds, the digital and the physical, co-exist in a product that would offer the benefits of both? Manolis Kelaidis demonstrates his elegant ideas for next-generation books. 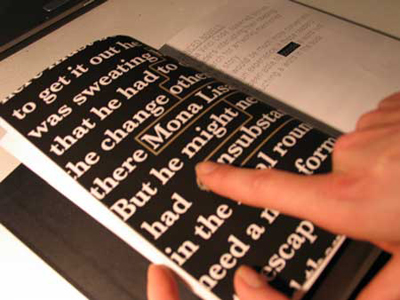 What’s particularly fascinating is that, consistent with our thesis that alpha geeks, who explore technology for the fun of it, are often those doing the most interesting work. Manolis doesn’t have a startup he’s pitching (yet – he has apparently filed a patent). He’s a lecturer at the Royal College of Art and a Fellow at Imperial College’s Tanaka Business School in London. Whether or not his project ever becomes commercially viable, it’s the kind of sideways thinking that gives the publishers audience more hope for the future than dozens of me-too ebook startups or big company offerings.

What the BlueBook teaches us, along with some of the electronics-infused craft projects that Dale Dougherty of Make talked about in the keynote right before Manolis, is that we are moving towards a future in which the physical world will be infused with computing. It’s not a story about the future of the book so much as it’s a story about new ways to integrate digital and analog. It’s the other end of the same string that brought us the Nintendo Wii as an innovation in gaming. Manolis is asking us to think about a future when a “computer” isn’t just something with a keyboard and screen. 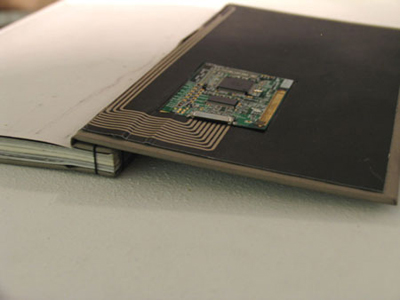 There’s more information at booktwo.org from a presentation Manolis gave at the Royal College of Art summer show last year. (The pictures in this post are also reproduced from the booktwo report. There are more photos on Flickr. We should also have Manolis presentation at TOC up online soon.)

P.S. Thanks to Timo Hannay of Nature, who put Manolis on our radar in the first place.