Preparing for the mobile wallet wars and in-app purchases continue to rise.

Here’s what caught my eye in commerce news this week.

Who’s got the winning wallet?

Several recent articles have speculated about the coming competition between Google Wallet and the forthcoming mobile wallet from Isis, which is set to debut in tests in Austin and Salt Lake City this summer. Tech bloggers love a contest, and even though there’s only one major player in this race so far, observers are handicapping the players before they even take the field.

MobilePaymentsToday.com ran a column comparing the merits of the two platforms in several categories. (Where was the massive infographic that we’ve all grown used to for this sort of thing?) Google took the prize in time-to-market (already out there, a little) and branding, while the nod went to Isis for building a solid ecosystem, with its support from three major U.S. wireless carriers and the top credit card networks and handset builders. Isis should also get the award for most imaginative and compelling demo video, based on the clip of Cyber Illusionist Marco Tempest at SXSW a few weeks ago (demo begins 15 seconds in, after the ad):

Of course, both of these plays depend on NFC wireless capability in phones, and while that’s destined to ramp up soon, GigaOm reported that in 2011, NFC in the U.S. lagged far behind other regions. Of the 30 million NFC-capable handsets sold worldwide last year, about five million went to North America, 10 million went to Europe, and more than that went to Asia. Some mobile wallets, of course, don’t rely on NFC: PayPal, for example, is getting ready to launch an updated version of its wallet that operates closer to the direct billing model, where you enter your mobile number on the retailer’s keypad and then confirm when a text is sent to your mobile. PayPal’s system is a bit less elegant than wireless tap and pay, but as we wrote a few weeks ago, it’s ready now and available on any phone that supports texting.

We couldn’t help notice that all this handicapping of the two most visible mobile wallets overlooked the potential of a third player that has yet to enter the arena. Only a few weeks ago, mobile payment geeks were abuzz about newly published patents from Apple that described a method for payment with credit cards that sends the receipt to the user’s iTunes account. And since there are more than 200 million of those iTunes accounts (and 350 million iOS devices out there), that represents a significant installed user base that may be receptive to Apple’s familiar interface applied to a mobile wallet. Those who think Apple is coming late to the party should be reminded that Apple has never had to be the first to a market to end up dominating it. 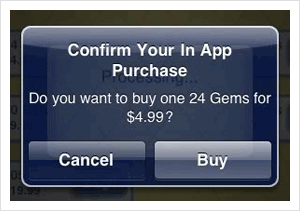 Here’s more evidence that in-app purchases are driving most of the revenues in mobile apps. According to Inside Mobile Apps, Distimo, which specializes in tracking app store activity, reports that a majority of the top-grossing apps on iPad, iPhone and Android monetize with in-app purchases. The researcher found that, of the top 200 grossing apps in the iPad App Store, the iPhone App store, and the Google Play store in February, 74% of the iPad apps and 80% of the iPhone apps featured in-app purchases. The numbers are even more remarkable when taken with the additional insight that only 10% of all iPad apps and 6% of iPhone apps even offer in-app purchases. So, there appears to be an awful lot of iOS apps that aren’t yet interested in playing in the winning game.

The findings support other reports that have also suggested the superiority of the foot-in-the-door model, including one by Flurry Analytics last summer that found freemium emerging as the dominant model for generating revenue from mobile apps.