From games to reference books, crowdsourcing is shaking up industries.

Happy day after Pi Day, everyone (except all you Tau fanatics …). If you happen to live in Louisville, drop by the FedEx facility there and say “hi” to my new iPad. It’s been sitting there since last Friday, waiting for the magic hour to take the final leg of its voyage so all of them arrive on the same day (unless you happen to live in Vietnam, evidently …). My upgraded Apple TV unit is allegedly arriving today, a day early. That’s me, single-handedly helping to drive Apple’s stock price over $700.

Disintermediation, thy name is Kickstarter 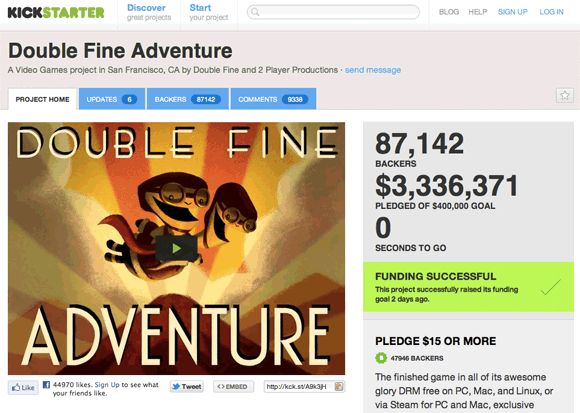 Kickstarter has gained a reputation for letting small ventures crowdsource their funding, providing an alternative to venture and bank investments for new products and projects. But with a few notable exceptions, it’s been fairly small-scale stuff, typically between $10,000 and $100,000 of total funding.

Meanwhile, independent game designers have been hampered by the large costs associated with creating products that can compete with the big players such as EA. With costs for even a relatively simple game running into the millions, there was no practical way to fund great ideas without giving up artistic control to the megacorps.

Now, several game developers have decided that game funding and Kickstarter are two great tastes that taste great together. Crowdfunding for small software projects is old hat for Kickstarter, but the scale that it is now being taken to is rather breathtaking.

It started with the folks over at “Double Fine Adventure” (which includes the talent behind the well-known “Monkey Island” series of games), who set up a Kickstarter project with a $400,000 goal. That money was intended to fund development of a new point-and-click adventure game. To say that it was successful is truly an understatement: The project ended up with $3.3 million dollars in funding.

Brian Fargo, who was executive producer for the hit games “Wasteland” and “Fallout,” evidently liked what he saw. He’s following the same model for “Wasteland 2.” It’s already blown past the stated goal of $900,000 (it was just over a million dollars pledged when I wrote this). With 32 days to go in the pledge period, it’s almost certain that they will even exceed the $1.5-million-dollar level that will let them create both a Windows and OS X version.

This disintermediated payment model is very exciting, both for software developers who might have a big idea that needs big funds, and potentially for many other areas of creative endeavor. Your favorite show just got canceled? Fund it yourselves! In the mean time, hopefully we’ll see more exciting independent games find the budgets they need to become reality.

And speaking of crowdsourcing

This week marks the end of an era, as Encyclopedia Britannica announced that they will no longer issue a print version of their product (digital products will continue). For people of my age, Britannica was the go-to source when grinding out those high school term papers (along with another dinosaur, the Reader’s Guide to Periodical Literature).

What did in the EB was, of course, Wikipedia. For all its warts, there was just no way that a massive tome (both physically and financially) was going to survive in the long term, when a much more up-to-date and comprehensive source was available for free. The Britannica’s 120,000 articles just couldn’t compete with Wikipedia’s nearly three million, especially when the cutting-edge articles in the 2010 EB edition covered such breaking news as the Human Genome Project (completed in, wait for it, 2003).

Purists will bemoan the death of an authoritative, expert-edited research source, but the reality is that expert-curated sources (such as journals) are proving to be as subject to bias and error as crowdsourced ones. I hear horror stories from my wife about how hard it is to get a journal article accepted if it goes against the conventional wisdom, especially since the people reviewing the articles are usually the ones who have the most to lose if it turns out they were wrong. Crowdsourced reference material can suffer from the opposite problem, letting fringe theories creep in around the edges, of course.

In the end, what won the war for Wikipedia (apart from price and convenience) is the sheer volume of information available. Sure, a complete list of the characters appearing in “Firefly” may not end up being crucial to your kid’s next senior essay, but life is more than just papers. Wikipedia rules because it has the meaty articles, but also the ones you need on a day-to-day basis.