Why StreetEasy rolled its own maps 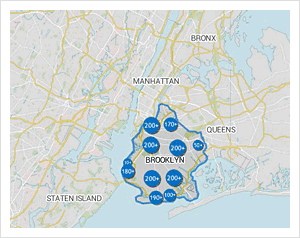 StreetEasy is a real estate service that offers detailed information about apartments, condos, and houses in New York City, the Hamptons, and some parts of northern New Jersey. Since its launch in 2006, the online service used embedded Google Maps to display search results and location information on most pages.

StreetEasy co-founder Sebastian Delmont (@sd) says that when Google told them last autumn that it intended to enforce pricing on its Maps API, the StreetEasy team looked about for more affordable options. Their experience was similar to others who have turned from proprietary systems to open data: It’s work to get started, but ultimately you have more freedom to create and innovate.

Delmont will speak on the cost/benefit analysis of rolling your own maps at Where 2012. He explores the same topic in the following interview.

What’s the argument for switching from a proprietary map service to an open one?

Sebastian Delmont: Cost was the main reason that drove us to finally start doing our own maps. We had wanted to do it for a long time, but it was never a pressing concern, and it wasn’t worth prioritizing over all the other things we wanted to do.

We had been using Google Maps and their APIs. Google had basically said, “you can embed these maps on your site and use our API, and we might charge for this service at some point.” But they had never really contacted us. In October 2011, Google set new conditions that were beyond what we could pay. We could have paid $10,000 to $40,000 per year, but not hundreds of thousands of dollars per year. That was about one order of magnitude too high. I think they have yet to actually charge anyone, but they are moving in that direction.

Google’s service is valuable. They have cameras on cars driving all around the world, so they invest a lot in it. But they didn’t give us a choice on how much we wanted to buy. You can’t just choose New York City and its environs. For our service, we need deep coverage, but not wide. Foursquare, on the other hand, needs wide coverage, but not necessarily deep.

How long did it take to switch over?

Sebastian Delmont: Once we tried to negotiate and realized that wasn’t going to lead us to a happy place, we started looking at OpenStreetMap (OSM). It took me a week or two of research to understand the problem, research tools and feel ignorant enough to start. Then came about half a week to port our backend code to use Leaflet as our JavaScript interface instead of Google’s. Then about a month flew by while we were building and tweaking our map tiles, and tweaking them even more.

All in all, it took about a month and a half to completely change maps. If we had gone with the tilesets that MapQuest or MapBox have already built, it would have taken a couple of weeks. But I wanted to have fun playing with maps. Although money was the reason that forced the switch, I had always had little annoyances with Google Maps in New York City — like the subway lines being literally correct, but not
exactly what New Yorkers expected.

What do you mean by “not what New Yorkers expected”?

Sebastian Delmont: The subway lines show express and local stops. At many stations, the express will stop there in the early hours of the morning or on weekend schedules, but not at peak times. A maps engineer would have told you, “this is the data we got from the MTA.” When you’re mapping the entire world, that’s a decent answer, but we can go deep.

Where does your data come from?

Sebastian Delmont: We use a few sources. Streets, rivers, landmarks, and parks are from OSM. We use building outlines from the City of New York, which has a dataset of all the buildings in the city. We use our own neighborhood boundaries. We use a schools database that’s a version of the city’s school database. We use subway station data from City University of New York’s urban mapping GIS group, which has done a lot of great work. None of these sources cost us anything. The only cost right now, besides our time, is the cost of bandwidth through MapBox’s development feed, which will probably end up being around $10,000 to $20,000 per year, depending on how much our traffic grows.

Your Where session will look at switching costs. Looking back, was StreetEasy’s switch worth it?

Sebastian Delmont: For us, it’s been worthwhile. We can do things like optimize our maps for real estate rather than car navigation. The idea of having my own map where I can remove unnecessary data and change how it looks is great. I can ride on my bicycle with the GPS and get the right coordinates of streets and neighborhoods, and it’s just dependent on my ability to decide it’s worth my time to update my map. I like that.

Where Conference 2012 — O’Reilly’s Where Conference, being held April 2-4 in San Francisco, is where the people working on and using location technologies explore emerging trends in software development, tools, business strategies and marketing.