MAKE's Hardware Innovation Workshop is coming May 15-16 at PARC. 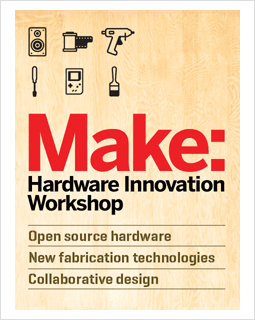 MAKE’s Hardware Innovation Workshop takes place May 15-16, at PARC in Palo Alto. The Workshop is a one-and-a-half day intensive introduction to the business of making and the makers who are creating these businesses.

Here are some of the topics we’ll be discussing:

As important as the topics are the makers who are taking the lead in creating innovative businesses and innovative platforms, often combining hardware and software with an open community.

Phil Torrone and Limor Fried of AdaFruit combine amazing engineering design with grassroots community building to create an innovative open-source hardware company located in the heart of Manhattan. This self-funded business continues to grow and grow, and it’s the kind of success story you can read about in Wired magazine but still fly under the radar of many.

Massimo Banzi of Arduino has raised interest in microcontrollers to a new high, creating a platform for hobbyists, artists, designers and developers. Arduino is the brains of many maker projects, such as MakerBot and DIY Drones. Unexpectedly, it was designed and manufactured just outside Turin, Italy.

Ayah Bdeir of LittleBits has created a new interactive educational kit that teaches electronics. She has improved a basic design, iterated through several prototypes and now she’s manufacturing at scale for a mass market.

Bunnie Huang, formerly of Chumby, is a hardware hacker extraordinaire. Now living in Singapore, he’s especially familiar with sourcing parts from China as well as setting up manufacturing processes there. He’s also an inspiring maker himself.

Jay Rogers, CEO of Local Motors, believes that collaborative design practices and the online tools that enable collaboration are making possible new ways to build anything. His focus is on building open source vehicles, and he’s set up a microfactory in Chandler, AZ where you can go to build your own RallyFighter.

Kai Backman, CEO of TinkerCad, worked on Google Docs but left Google after he started playing with a 3D printer. He believed that the software tools for 3D design were too complex for mere mortals to create things to make on a 3D printer so he co-founded TinkerCad, a browser-based 3D design tool.

Carl Bass, CEO of Autodesk, has created a new consumer division to develop free 3D design tools and combine them with the robust online community of Instructables. He also finds time to work in his own workshop, where he helps kids make their own wooden baseball bats for a local Little League. He can make them in the traditional way on a lathe but he now can also make them on a supersized 5-axis CNC router.

Mark Hatch, CEO of Techshop, is busy creating large-scale workshops throughout the country. Starting in the Bay Area with three locations, a TechShop recently opened in Detroit, MI. What you may not know about TechShop is that it’s becoming not just a place for hobbyists on weekends and evenings, it’s become the go-to place for hardware entrepreneurs to build prototypes, and even do small-scale manufacturing.

Ted Hall, CEO of Shopbot, first built his own CNC machine so that he could build a wooden boat. He never really finished his boat but ShopBot tools are found in TechShops, Fab Labs and through a network of independent makers called 100K Garages.

John Diamatos of MakerBot Industries is the Director of Application Development. He’s exploring the kinds of applications that will drive 3D printer sales in the home and office. It’s one thing to have a 3D printer to print a few things for fun, but it’s another to see it as a production tool for new designs and new products.

Allan Chochinov of Core77 is starting a new design program in the fall called Products by Design at the School for Visual Arts in New York City. This program, influenced by the fabrication tools and collaborative design practices of makers, will explore what we make, how we make and why we make it.

Brad Feld, co-founder of the Foundry Group, is the lead investor in MakerBot Industries and some other hardware startups. In a world of copy-cat investing, Brad is doing something very different.

Nick Pinkston of CloudFab began looking at automating manufacturing by creating software tools that eliminated costly design review. He believes the future of manufacturing in America is in building open source software that automates even more of the process from quoting all the way through to packaging.

Greg Borenstein, author of O’Reilly’s “Making Things See,” has been a leading experimenter in the open Kinect movement, developing 3D applications based on Kinect, Processing and Makerbot. The Kinect is a great example of a product that was developed for one purpose (gaming) while the development community has unlocked its potential for cool new applications in areas such as healthcare.

Alasdair Allan is an astrophysicist who specializes in remote sensing. He’s the author of several O’Reilly books including “ iOS Sensor Applications with Arduino.” Alasdair will demo applications that integrate Arduino and the iPhone/iPad.

For the full listing of speakers and their bios, go to: speaker roster.

On Tuesday evening, we will host an opening reception and an innovation showcase of 25 hardware startups including several new 3D printer startups along with demos by companies like Autodesk, ShopBot, MakerBot, and more.

For complete information on the event and to register, go to: Hardware Innovation Workshop.

Maker Faire Bay Area follows this event on the weekend, May 19-20.