Visualization of the Week: 30 years of tech IPOs

This week’s visualization comes from The New York Times, which tries to shed a little light on Facebook’s initial public offering by showing how it compares to the 2,400 technology IPOs that have occurred since 1980.

The visualization begins with a timeline of tech IPOs that runs up until last week. Until then, Google had the largest market capitalization with a value of $28 billion at its launch. The next image in the visualization series then adds Facebook to the mix — the animation makes the other IPOs literally shrink in comparison. Facebook’s value at launch was $104 billion. 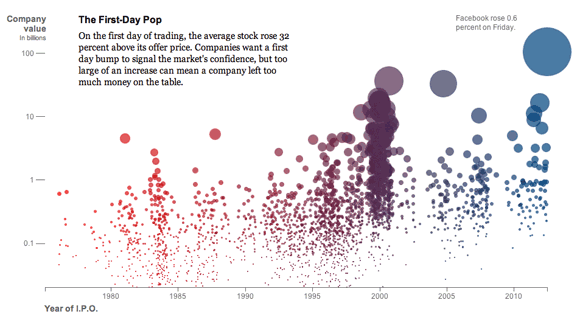 The bubbles for each company reveal their value at the time of IPO, the percentage change after one day of trading, and their value three years later.

OSCON 2012 — Join the world’s open source pioneers, builders, and innovators July 16-20 in Portland, Oregon. Learn about open development, challenge your assumptions, and fire up your brain.

Save 20% on registration with the code RADAR