Here are a few of the stories that caught my eye in the commerce space this week.

Facebook’s ad future is looking up

There was a flurry of commerce news in the Facebook camp this week. Payvment, the largest ecommerce platform on Facebook, launched an ad building service, allowing merchants to build auto-targeted Facebook ad campaigns. Focused on smaller merchants, the service is designed to create ads with a single click; the ads are automatically targeted toward customers based on their Facebook shopping and browsing histories.

“Merchants select a product they want to advertise, and Payvment grabs one of the already-uploaded photos, the product description, and … creates a Facebook ad complete with image, headline, and copy,” writes Josh Constine at TechCrunch. “It analyzes the merchant’s store and who have Liked, bought, browsed that product, finds people who’ve interacted with similar products on its other stores, and shows them the ad.”

The official press release points to a recent survey of Payvment’s merchant customers that found 60% hadn’t bought a Facebook ad, of which 25% stated “they haven’t tried them because they don’t understand how to use them.” In his post, Constine highlights the bottom line of streamlining Facebook ad building and buying:

“While hundreds of big brands spend millions on ad campaigns, hundreds of thousands of small businesses buying thousand-dollar campaigns can add up. Facebook needs the sum to grow its revenue and satisfy investors …”

And the timing looks to be ripe — AdAge also reported this week on an early survey of Facebook’s new mobile-only ads that points to a promising future: “The click-through rate for mobile ads amounted to 0.79%, compared to the 0.148% average across all five placements studied … The click-through rate for desktop-only news-feed ads falls roughly in the middle at 0.327%.”

PayPal gave itself a face lift this week, overhauling its website to improve its user interface and the user experience. The PayPal blog says the new design cuts down on the number of site pages and simplifies menus and labels.

Computer use in general is turning more and more toward mobile, and the PayPal’s site design seems to be keeping this firmly in mind as well. As Ingrid Lunden notes at TechCrunch, the “redesign also happens to look a lot more touch-friendly, perhaps a sign of how much tablets, smartphones and the mobile web figure today in the company’s strategy.” As you can see in the screenshot below, the personal site page now has just three tabs — Buy, Sell and Transfer — and an Explore button that takes visitors to the company’s new offerings. 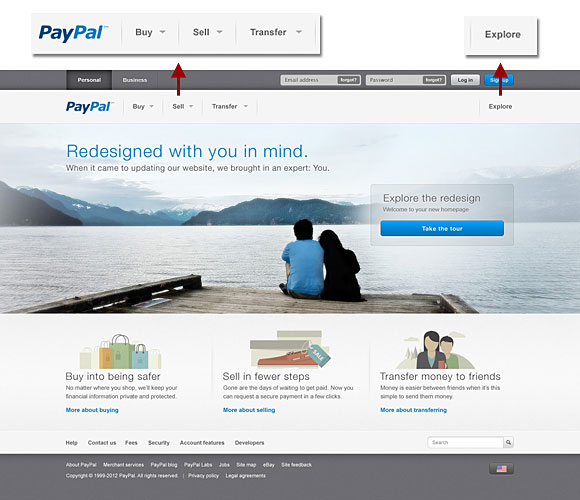 The new site is rolling out in the U.S. over the next couple of weeks and will launch globally at a later date.

If you want to scale, you have to educate the masses

With all the talk of strategies to battle showrooming and ideas whirling about on tying mobile into brick-and-mortar retail to better engage — and sell to — customers, it was interesting to read how some of those techniques are playing out in practice. Mobile Commerce Daily reported this week on a panel at the 2012 MMA Forum called “How Mobile Can Bridge the Gap in the Multi-Channel Commerce Landscape,” during which Don Wortley, the senior digital marketing manager at Best Buy, commented on the company’s strategies to integrate mobile into the physical shopping experience.

Wortley said during the panel that the mobile pilot programs do very well, but problems arise as they try to scale them. He attributes the issues mainly to customers not knowing how to use — or simply not using — their smartphone features. Mobile Commerce Daily reports:

“‘When we think of all these super streamlined experiences, we still have to educate the masses,’ Mr. Wortley said. … ‘We have not done a good job educating consumers on the tools we have … We’ve had a beta culture where we stick stuff out there and haven’t wanted to advertise until it is polished, but that is never going to happen. We are currently making plans to drive usage of tools, to put some resources behind that.'”

You can read more of Wortley’s comments as well as comments from other panel members regarding the effect corporate silos are having on the success of in-store mobile here.