To update an old proverb for the Information Age, digital politics makes strange bedfellows. In the current polarized atmosphere of Washington, certain issues create more interesting combinations than others.

In that context, it would be an understatement to say that’s been interesting to watch how Representative Darrell Issa (CA-R) has added his voice to the open government and Internet policy community over the last several years.

Rep. Issa was a key member of the coalition of open government advocates, digital rights advocates, electronic privacy wonks, Internet entrepreneurs, nonprofits, media organizations and congressmen that formed a coalition to oppose the passage of the Stop Online Piracy Act (SOPA) and PROTECT IP Act (PIPA) this winter. Rep. Issa strongly opposed SOPA after its introduction last fall and, working with key allies on the U.S. House Judicial Committee, effectively filibustered its advance by introducing dozens of amendments during the bill’s markup.

The delay created time over Congress’ holiday recess for opposition to SOPA and its companion bill in the Senate (The PROTECT IP Act) to build, culminating in a historic “black out day” on January 18, 2012. Both bills were halted.

While he worked across the aisle on SOPA and PIPA, Rep. Issa has been fiercely partisan in other respects, using his powerful position as the chairman of the U.S. House Oversight and Government Reform Committee to investigate various policy choices and actions of the Obama administration and federal agencies. During the same time period, he’s also become one of the most vocal proponents of open government data and Internet freedom in Congress, from drafting legislation to standardize federal finance data to opposing bills that stood to create uncertainty in the domain name system. He also sponsored the ill-conceived Research Works Act, which expired after received fierce criticism from open access advocates. 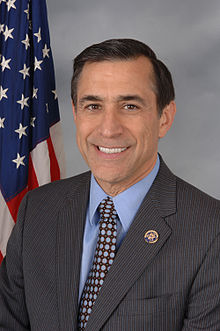 In recent years, Rep. Issa and his office have used the Web and social media to advance his legislative agenda, demonstrating in the process a willingness to directly engage with citizens and public officials alike on Twitter as @DarrellIssa, even to the extent of going onto Reddit to personally do an “Ask Me Anything.” Regardless of where one stands on his politics, the extent to which he and staff have embraced using the Web to experiment with more participatory democracy have set an example that perhaps no other member of Congress has matched.

In June 2012, I interviewed Rep. Issa over the phone, covering a broader range of his legislative and oversight work, including the purpose of this foundation and his views on regulation, open data, and technology policy in general. More context on other political issue, his personal life, business background and political career can be found at his Wikipedia entry and in Ryan Lizza’s New Yorker feature.

Our interview, lightly edited for content and clarity, is broken out into a series of posts that each explore different aspects of the conversation. Below, we talk about open government data and his new “Open Gov Foundation.”

What is the Open Gov Foundation?

In June, Representative Darrell Issa (R-CA) launched an “Open Gov Foundation” at the 2012 Personal Democracy Forum. Rep. Issa said then the foundation would institutionalize the work he’s done while in office, in particular “Project MADISON,” the online legislative markup software that his technology staff and contractors developed and launched after the first Congressional hackathon last December. If you visit the Open Gov Foundation website, you’ll read language about creating “platforms” for government data, from regulatory data to legislative data.

Congressman Issa’s office stated that this Open Gov Foundation will be registered as a non-partisan 501c3 by mid-fall 2012. A year from now, he would like to have made “major headway” on the MADISON project working in a number of different places, not just federal House but elsewhere.

For that to happen, MADISON code will almost certainly need to be open sourced, a prospect that the Congressman indicated is highly likely to in our interview, and integrated into other open government projects. On that count, Congressman Issa listed a series of organizations that he admired in the context of open government work, including the Sunlight Foundation, Govtrack, public.resource.org, the New York State Senate, OpenCongress and the Open Knowledge Foundation

Th general thrust of his admiration, said the Congressman, comes from that fact that these people are not just working hard to get government data out there, to deliver raw data, but to build things that are useful and that use that government data, helping to build tools that help bridge the gap for citizens.

What do you hope to achieve with the Open Government Foundation?

Rep. Issa: I’ve observed over 12 years that this expression that people use in Congress is actually a truism. And the expression they use is you’re entitled to your opinion but not your facts.

Well, the problem in government is that, in fact, facts seem to be very fungible. People will have their research, somebody will have theirs. Their ability to get raw data in a format where everybody can see it and then reach, if you will, opinions as to what it means, tends to be limited.

The whole goal that I’d like to have, whether it’s routing out waste and fraud — or honestly knowing what somebody’s proposal is, let’s just say SOPA and PIPA — is [to] get transparency in real-time. Get it directly to any and all consumers, knowing that in some cases, it can be as simple as a Google search by the public. In other cases, there would need to be digesting and analysis, but at least the raw data would be equally available to everyone.

What that does is it eliminates one of the steps that people like Ron Wyden and myself find ourselves in. Ron and I probably reach different conclusions if we’re given the same facts. He will see the part of the cup that is empty and needs government to fill it. And I will see the part that exists only because government isn’t providing all of the answers. But first, we have to have the same set of facts. That’s one of the reasons that a lot of our initiatives absolutely are equally desired by the left and the right, even though once we have the facts, we may reach different conclusions on policy.

Does that mean more bulk data from Congress, which you supported with an amendment to a recent appropriations bill?

Rep. Issa: Let’s say it’s not about the quantity of data; it’s about whether or not there’s meaningful metadata attached to it. If you want to find every penny being spent on breast cancer research, there’s no way to compare different programs, different dollars in different agencies today. And yet, you may want to find that.

What we learned with the control board — or the oversight board that went with the stimulus — was that you’ve got to bring together all of the data if you’re going to find, if you will, people who are doing the same things in different parts of government and not have to find out only forensically after you’ve had rip-off artists rip-off the government.

The other example is on the granting of grants and other programs. That’s what we’re really going for in the DATA Act: to get that level of information that can, in fact, be used across platforms to find like data that becomes meaningful information.

Do you think more open government data remove some of the asynchronies of information around D.C.?

Issa:A lot of people have monetized the compiling of data in addition to monetizing the consulting as to what its meaning is. What we would like to do is take the monetization of data and take it down to a number that is effectively zero. Analysis by people who really have value-added will always be part of the equation.

Do you envision putting the MADISON Code onto GitHub, for open source developers in this country and around the world to use and deploy in their own legislatures if they wish?

Rep. Issa: Actually, the reason that we’ve formed a public nonprofit is for just that reason. I don’t want to own it or control it or to produce it for any one purpose, but rather, a purpose of open government. So if it spawns hundreds of other not-for-profits, that’s great. If people are able to monetize some of the value provided by that service, then I can also live with that.

I think once you create government information and, for that matter, appropriate private sector information, in easier and easier to use formats, people will monetize it. Oddly enough, they’ll monetize it for a fairly low price, because that which is easy, but you have to create value at a low cost. That which is hard, you can charge a fortune to provide that information to those who need it.

Will you be posting the budget of the Open Gov Foundation in an open format so people know where the funding is coming from and what it’s being spent on?

Rep. Issa: Absolutely. Although, at this point, we’re not inviting any other contributions of cash, we will take in-kind contributions. But at least for the short run, I’ll fund it out of my own private foundation. Once we have a board established and a set of policies to determine the relationships that would occur in the way of people who might contribute, then we’ll open it up. And at that point, the posting would become complex. Right now, it’s fairly easy: whatever money it needs, the Issa Family Foundation will provide to get this thing up and going.