Give a gift through Square

Mobile payment company Square got into the gift card business this week, launching a gift card service tied to its Square Wallet. Christina Chaey reports at Fast Company that Square Wallet users can buy gift cards in amounts from $10 to $1,000 from any of the 200,000-plus businesses that process payments with Square and give them to anyone — recipients do not need to be Square users.

Once a gift card is purchased, it is sent to a recipient’s email inbox. From there, the gift card can be redeemed in a number of ways: for Square users, the card will automatically appear in their Square Wallet; iO6 users can save the card to their Passbook; and for those who don’t use either Square or Passbook, a QR code can be printed out for a merchant to scan.

Given its recent partnership with Starbucks that catapulted Square into the mobile payment mainstream and its international expansion into Canada, gift cards might seem a bit of a departure from the platform’s mobile payment focus. Square CEO Jack Dorsey explained the move in an interview with The Wall Street Journal’s Matthew Lynley. Not only is Square aiming to make the gift card experience cheaper for merchants — Dorsey explained that traditional gift cards can cost merchants 10% to 15% to issue, where Square will charge only the 2.75% they do for credit cards — but it’s also using the cards as a discovery tool and to streamline the experience for consumers. Dorsey said to Lynley:

“The biggest problem merchants have is being remembered and being discovered, so it’s another tool for discovery. If I really like a place and I’m a good friend of yours, I can tell you, but if I give you a gift card, you’re really going to try it out. … It also starts getting into a concept of more remote commerce. People from their couch can send these experiences, can send these gifts, and they don’t need to pick out different things.”

You can read Lynley’s full interview with Dorsey here.

The company, which is launching with $10 million in Series A funding, is looking to help businesses develop or expand their mobile payments and mobile platform strategies. Kim writes that the company’s payment component works with 90% of existing POS systems. Merchants can create digital pre-paid cards or mobile payments, and payments can be processed via barcode scanning, via the cloud, or (in the future) via NFC, Kim reports.

Cardfree CEO Jon Squire told Kim that the company stands out from its competition not only in its team’s depth of experience, but in that they’re not looking to use the merchants as means to another end. Kim reports:

“Squire also believes that merchants are wary of working with some third-party wallet services [that] want to share data and also build up awareness for their own brand instead of the merchant. With Cardfree, merchants can work with the tools they have in place and be assured they will control the experience and branding, Squire said.”

Smartphone-based commerce gets a personal assistant 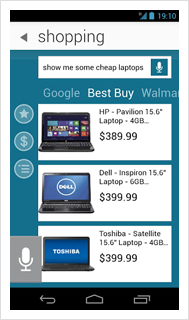 Maluuba, Android’s personal assistant answer to Apple’s Siri, got an upgrade this week that could bring a whole new dimension to retail shopping. Ryan Kim reports at GigaOm that users now can shop with their phones by telling Maluuba what they want.

When a user makes a shopping-related request, Kim reports, Maluuba pulls data from Google, Best Buy and Wal-Mart, and shows results from local retailers as well — and results aren’t limited to online shopping; Maluuba also will return results for local stores that have the item in question in stock. Google’s results are displayed first, with tabs to Best Buy and Wal-Mart results.

Once you find an item to buy, you click through to an external check-out process, which Ryan reports is a bit slow and clunky, but he notes that the streamlined search experience Maluuba provides might balance that out and “help spur on more smartphone-based commerce.” After testing, Kim says deeper ecommerce integrations are needed, but that Maluuba is “off to a good start.”