Masking the complexity of the machine

The industrial Internet will bring abstraction and modularity to the physical world.

The Internet has thrived on abstraction and modularity. Web services hide their complexity behind APIs and standardized protocols, and these clean interfaces make it easy to turn them into modules of larger systems that can take advantage of the most intelligent solution to each of many problems.

The Internet revolutionized the software-software interface; the industrial Internet will revolutionize the software-machine interface and, in doing so, will make machines more accessible. I’m using “access” very broadly here — interfaces will make machines accessible to innovators who aren’t necessarily experts in physical machinery, in the same way that the Google Maps API makes interactive mapping an accessible feature to developers who aren’t expert cartographers and front-end developers. And better access for people who write software means wider applications for those machines.

I’ve recently encountered a couple of widely different examples that illustrate this idea. These come from very different places — an aerospace manufacturer that has built strong linkages between airplanes and software, and an advanced enthusiast who has built new controllers for a pair of industrial robots — but they both involve the development of interfaces that make machines accessible.

The Centaur, built by Aurora Flight Sciences, is an optionally-piloted aircraft: it can be flown remotely, as a drone, or by a certified pilot sitting in the plane, which satisfies U.S. restrictions against domestic drone use. Customers include defense agencies and scientists, who might need a technician onboard to monitor equipment in some cases but in others send the plane on long trips well beyond a human’s comfort and safety limitations.

John Langford, Aurora’s founder, described his company’s work to me and in the process offered a terrific characterization of what the industrial Internet does: “We’re masking the complexity of the machine.”

The intelligence that Aurora layers onto its planes reduces the entire flight process to an API. The Centaur can even be flown from the pilot’s seat in the plane through the remote-operator control. In other words, Aurora has so comprehensively captured the mechanism of flight in its software that a pilot might as well fly the airplane he’s sitting in through the digital pipeline rather than directly through the flight deck’s physical links.

A highly-evolved interface between airplane and its software means that the software can draw insight from the plane, reading control settings as well as sensors to improve its piloting performance. “An experienced human pilot might have [flown] 10,000 to 20,000 hours,” says Langford. “We already have operating systems that have hundreds of thousands of flying hours on them. Every anomaly gets built into the memory of the system. As the systems learn, you only have to see something once in order to know how to respond. The [unmanned aircraft] has flight experience that no human pilot will ever build up in his lifetime.”

The simplified interface between humans and the Centaur’s combined machinery and software might eventually make flight vastly more accessible. “What we think the robotic revolution really does is remove operating an air vehicle from the priesthood that it’s part of today, and makes it accessible to people with lower levels of training,” he says. 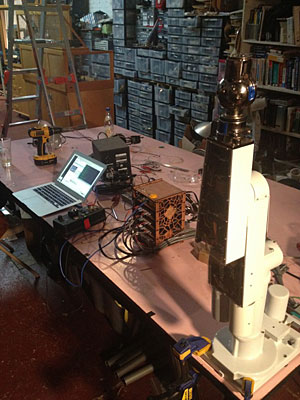 I saw a different kind of revolutionary accessibility at work when I visited Trammell Hudson at NYC Resistor, a hardware collective in Brooklyn. I came across Hudson through a blog post he wrote detailing his rehabilitation of a pair of industrial robots — reverse-engineering their controls and building his own new controller stack in place of the PLCs that had operated them before they were salvaged from a factory with wire cutters.

“The arm itself has no smarts — just motors and quadrature encoders,” he says. (Even the arm’s current position is stored in the controller’s memory, not the robot’s.) Hudson had to write his own smarts for the robot, from scratch — intelligence that, when the robot was new, resided in purpose-built controllers the size of mini-fridges but that today can be built from open-source software libraries and run on an inexpensive microprocessor.

The robot’s kinematics — the spatial intelligence that decides how to get the robot’s hand from one place to another by repositioning six different joints — run on Hudson’s laptop. He’s interested in building those mathematical models directly into a controller that could be built from widely-available parts by anyone else with a similar robot, which could give second lives to thousands of high-quality industrial automation components by taking discarded machines and assigning new intelligence to them.

“The hardware itself is very durable,” Hudson told me. “The software is where the interesting things are happening, and the controllers age very rapidly.

Hudson’s remarkable feat of Saturday-afternoon electrical engineering was made possible by open-source microcontrollers, software libraries, and hardware interfaces (and, naturally, his own ingenuity). But he told me the most important factor in the success of his project was the rise of an online community that has an extraordinarily specialized and sophisticated understanding of electronics. “The ease of finding information now is incredible,” he said. “Some guy posted the correct voltage for releasing the arm’s brake, and I was able to find it in a few minutes and avoid damaging anything.”

“We went through a white-collar dark ages in the 1980s,” Hudson said. “People stopped building things. No one took shop class.” Now hardware components, abstracted and modularized, have become accessible to anyone with a technical mindset, who can improve the physical world by writing more intelligence onto it.

In an earlier reverse-engineering project, Hudson wrote his own firmware, which became Magic Lantern, for Canon’s 5D Mark II digital SLR camera. “I have a 4 by 5 [inch] camera from the 1890s — with my Canon 5D Mark II attached to the back,” he says. “The hardware on the old camera is still working fine, but the software on the 5D is way better than chemical film.”