Problems with GM foods lie not in genetics, but in the structure of industrial farming. 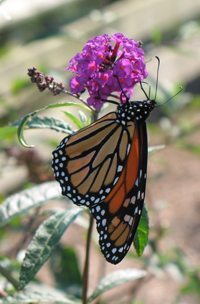 A while ago, I read an article in Mother Jones: GM Crops Are Killing Monarch Butterflies, After All. Given the current concerns about genetically modified foods, it was predictable — and wrong, in a way that’s important. If you read the article rather than the headline, you’ll find out what was really going on. Farmers planted Monsanto’s Roundup Ready corn and soybeans. These plants have been genetically modified so that they’re not damaged by the weed killer Roundup. Then the farmers doused their fields with heavy applications of Roundup, killing the milkweed on which Monarch caterpillars live. As a result: fewer butterflies.

But that’s really not what the headline said. The GM crops didn’t kill the butterflies — abuse of a herbicide did. It’s very important to distinguish between first order and second order effects. The milkweed would be just as dead if the farmers applied the Roundup directly to the milkweed. And, assuming that the farmers are trying to kill weeds other than milkweed (which only grows at the edges of the field), the caterpillars would survive if farmers applied Roundup more precisely, just to the crops they were trying to protect. Is it safe to eat corn that’s been genetically modified so that it’s Roundup resistant? I have no problem with the genetics; but you might think twice about eating corn that has been doused with a potent herbicide. Do you wash your food carefully? Good.

The article goes on to talk about corn that has been modified with the Bt gene, which causes it to produce its own insecticide. Bt insecticides are commonly used, frequently by organic farmers, to control caterpillars. With genetic modification, the corn plant produces the insecticide itself: it no longer needs to be applied externally. But the world is full of plants that produce their own insecticide; we call them “poisonous,” and we don’t eat them, though they’re just as natural as the plants we do eat. Milkweed is a prime example, as is tobacco (nicotine is a common insecticide). As a consequence of eating milkweed while they are caterpillars, Monarch butterflies are poisonous to birds, which have learned to avoid them. In the constantly shifting balances of evolution, insects are evolving resistance to Bt. The important question here, then, is whether Bt produced by modified corn and spread by pollen is safer for Monarch caterpillars than more intensive applications of Bt. The answer isn’t clear, though I’d be willing to go with the modified corn.

There is nothing new about genetically modified foods. Plants have genetically modified themselves for billions of years, and humans have grafted and cross-bred plants for thousands of years. I have no doubt that it would be possible to breed Roundup resistant corn the “traditional” way. It would take longer, but it can certainly be done, just as surely as we breed antibiotic-resistant bacteria by indiscriminate use of antibiotics. There’s nothing magical about what’s happening. We could probably do the same to create corn that makes its own pesticide. Genetic modification is faster and more precise than cross-breeding, but that’s really the only difference. Labelling GM foods is probably a good thing, but I’d be more interested in labelling all foods with the pesticides and herbicides that have been applied, by whatever means, genetic or otherwise.

So, the story really isn’t about genetically modified organisms; it’s about industrial farming practices and second-order effects. (There’s an all-too-brief nod in that direction at the end of the article.) Second- and third-order effects are certainly important: they’re the consequences of our actions. But that’s different from blaming the GMOs themselves. As Thomas Pynchon wrote, “If they can get you asking the wrong questions, they don’t have to worry about the answers.” There is so much wrong with industrial farming practices that I suspect it’s even in Monsanto’s interest to focus attention on the genetics, rather than on the industry itself.

Synthetic biology is an extremely important technique that will affect our lives in ways as diverse as our food supply, lighting (the Glowing Plant), and medicine (can we create bacteria that live in a diabetic’s gut and deliver insulin as needed?). I am not so naive as to believe that all applications of synthetic biology are “good.” It’s easy to imagine unethical applications of biology: say, food that makes your slave labor energetic but docile and easily controlled. But that’s no different from any other technology. As Drew Endy said (and as I’ve quoted elsewhere), we need to keep synthetic biology weird and creative. It’s already in the hands of big corporations, but if all that comes from it is what big corporations want, we have failed. Likewise, if agribusiness can keep the public distracted with fears about Frankenveggies while ignoring the real issues in our food supply, we have lost.

We have to be aware of the biology we create and the consequences of that creation. Every action has consequences, and not all consequences are bad. Weed killer itself is not a bad thing (I’ve used a variety of Roundup to get rid of a Poison Ivy infestation), nor are GMOs. But I find it hard to imagine any circumstances under which the over-application of weed killer is a good thing. It’s clear and unfortunate that Roundup Ready corn creates the incentive to use weed killer indiscriminately, leading to abuse that the makers of that herbicide would like to encourage. But let’s understand where the problem lies: it’s not in genetics, but in the structure of industrial farming. If we don’t, we’re in danger of asking the wrong question. And then, the answer really doesn’t matter.