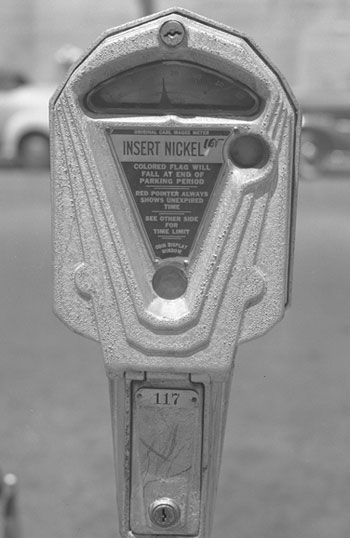 Some might see this as a case of cities standing in the way of private-sector innovation, comparable to regulatory fights over Airbnb and Uber. However, those profiting by using Monkey Parking to “share” their on-street spots are effectively trying to sell something that doesn’t belong to them. Curb parking is a publicly owned “commons” — not the private possession of whomever occupies a space.

Even if their solutions are illegal, these start-ups are right: parking is broken in many American cities, and their solution is a business opportunity for both the public and private sectors. We need a thorough reassessment of parking management in American cities, and civically minded technologies are a big part of the solution. That’s the thinking of other departments of San Francisco’s government as well as one of urban planning’s most cited and least read theorists, Donald Shoup.  For the nascent field of civic technology, Shoup’s nuanced research demonstrates how new technologies and policy can together improve city life — and lead to true public good — at the same time as the city attorney’s enforcement actions highlight the potential pitfalls of “sharing” services designed only for private profit.

In addition to being home to an ever-growing number of technology start-ups and giants, San Francisco has also become the country’s center for parking innovation. SFpark, a federally funded initiative run by the San Francisco Municipal Transportation Agency (SFMTA) and advised by Shoup, has been using dynamic meter pricing to ensure that at least a few parking spots are always available on each block. The city’s planning department has been removing requirements from its codes that force developers to include minimum numbers of parking spaces in their buildings; now the decision of how many parking spaces to include in new construction in certain areas of the city is left to developers and their investors to determine based on their own financial models.

The SFMTA and the San Francisco Planning Department are not treating free parking as a public good. Instead, both are using market-based mechanisms to speed the flow of the city’s transportation network (fewer cars slowly circling the block looking for open spots) and to increase the city’s walkability and affordability (condo-purchasers given the choice of whether to spend money on their own parking spots or alternatives like car-sharing programs, ride-sharing services, bicycles, and transit).

A neoliberal-libertarian-communitarian plan to fix parking

These strategies come from Shoup, a jocular UCLA professor best known for writing The High Cost of Free Parking, a book that’s the Moby Dick of urban planning. Everyone in planning talks about it (including many on Twitter who call themselves “Shoupistas”), but few have actually read it. Shoup’s writing is clear and engaging, laced with metaphors comparing today’s “science” of parking planning (which advises precisely “one space per 10 nuns” at a nunnery and “one space per 2,500 gallons of water” at a swimming pool) to that of medicine in the days of leeches and astronomy when the sun supposedly orbited the Earth.

That it takes Shoup 765 pages to undo and update a long history of mistakes is understandable. It’s not actually the heft of this book that’s slowed the uptake of his ideas; it’s the fact that Shoup and his work are difficult to classify under one political label. He’s written for the libertarian Cato Institute, spoken repeatedly with the file-sharing entrepreneur turned hedge-fund mogul Mark Gorton, and recently I heard him present in Berkeley, at the invitation of a liberal NGO — a real spectrum of political persuasions. His strategies are simple to explain individually but nuanced in how they together balance the competing demands of opposing interests, almost like a three-legged stool:

Who are the constituents and power brokers who will support a set of proposals that are neoliberal, libertarian, and communitarian? Shoup himself thinks local residents and business owners are the logical backers, and that’s why he includes parking-benefit districts as the third leg of the stool: to offer voters a tax-free source of local revenue that also promises to make more accessible parking spots in front of their houses and businesses.

Our current parking conundrum is, in effect, that old story called the tragedy of the commons. We’ve abused our communal rights to free curb parking. What once may have been a public good is now, with more than 250 million cars on American roads, a wasteful competition cruising for open curb spots and an overreaching set of requirements for the construction of off-street lots and garages.

A tragedy of the commons is also, as Monkey Parking and its for-profit kin know, a sign of a business opportunity. It’s a market so inefficient that certainly some customers are willing to pay for the convenience of a normally free parking spot summoned by smartphone.

The sharing economy is a potential solution to tragedy-of-the-commons situations.

By putting prices on parking spots, these services are implementing Shoup’s neoliberal recommendation for dynamic pricing. But instead of his three-legged solution to managing the parking commons, Monkey Parking, et al., are effectively freestanding towers erected by tech investors.

Such services may help their immediate customers and financial backers, but they won’t increase overall parking availability or reduce unnecessary cruising, nor will they produce improvements to a city’s walkability, affordability, or sustainability.

The so-called sharing economy, with its promises of “access not ownership” and “collaborative consumption,” is a potential solution to tragedy-of-the-commons situations. But shouldn’t individuals and businesses only “share” what is legally theirs to begin with? The San Francisco city attorney makes this distinction, noting that “people are free to rent out their own private driveways and garage spaces should they choose to do so.”

Monkey Parking is a useful conversation starter. It highlights how mismanaged American cities’ public parking assets are. It even points toward one partial solution — that is, Shoup’s recommendation for dynamic pricing. But the San Francisco city attorney is right: rather than “sharing,” this is a case of private gain at public expense. And what’s of more lasting consequence is how for-profit services that illegally broker public parking spaces are distracting from technologies that could actually help fix our tragedy of the parking commons.

A smell test for civic technology

As Shoup recommends, solutions to parking problems will be implemented block by block, by locals who care. Perhaps in addition to attending city meetings and voting, those who push for parking reform can help to create technical solutions, too. That’s the promise of the “civic tech” movement, which aims to use technology to better engage people with their governments and their neighbors. It’s a worthy goal — and one that can, if done right, be good business, too.

Shoup’s three-legged stool can provide us with a smell test to quickly check whether a technical solution merits this label of civic tech, whether it’s both a public good and a good business. Shoup’s three recommendations balance the needs of individuals and their choices (the libertarian impulse), markets and their dynamics (the neoliberal impulse), and communities and their shared values (the communitarian impulse).

True civic technologies can help us get where we want to go.

Monkey Parking doesn’t fare well by this rubric: it’s of use to individuals who are willing to pay, but it doesn’t improve the overall dynamics of on- and off-street parking, and it profits unfairly (and, apparently, illegally) off of communities — one of three criteria met. Sweetch does make an effort to assuage local communities by donating $5 of every parking transaction to two charities. Park Circa, another parking app not mentioned by the San Francisco city attorney, pivoted last year from cash-based payments to credits that its own community of “sharers” earn by renting out their own driveways and garages and redeem to park in others’ spots. According to the city attorney, Park Circa is legal, given that it’s brokering rentals of privately owned parking. Whether Park Circa’s credits or Sweetch’s donations are meaningful community contributions is a different question. Depending upon how you answer it, Park Circa and Sweetch could meet two of the three criteria.

For technologies to substantively address the market dynamics of parking — to reduce the average time that everyone spends cruising for parking, right-size the numbers of parking spots, and remove hidden subsidies — they will need to also involve in some capacity the largest owners and operators of on-street parking and the most important regulators of off-street parking: local governments that set policies and public agencies that carry them out. SFpark demonstrates that this can be done in collaboration with large, well-established American companies. The initiative also demonstrated that this can even involve some amount of open-source software (SFpark’s iPhone app, Android app, and an API library are all available online.) But the fact that it’s the city attorney’s office making contact with these three “disruptive” parking tech start-ups, rather than San Francisco’s transportation authority or planning department (which might very well like to license and operate these kinds of parking apps as public services), shows that creating parking technologies that meet all three criteria of this civic tech rubric is quite the challenge.

The original civic tech for parking

An Oklahoma City newspaper publisher named Carl Magee thought up the coin-operated parking meter in 1935 while chairing a chamber of commerce committee on parking problems. The city started installing the meters only on one side of each downtown block. When shop owners on the other side saw how well the meters led to more turnover, more customers, and more revenue — to real sharing of the limited number of on-street spots — they asked for meters of their own. According to the Encyclopedia of Oklahoma History and Culture:

The impact of the parking meter was threefold. First, it straightened out Oklahoma City’s parking problem. Second, it brought revenue into the city coffers through meter money (a nickel an hour) and parking fines (a $20 fine for each violation). Third, it stimulated a huge growth in the assessed valuation of downtown commercial property.

So, in its day, the coin-operated parking meter did pass the smell test of Shoup’s three criteria. It was a civic technology.

New parking technologies are certainly overdue. They’re already underway in parts of San Francisco. Still, this history of the parking meter is useful to remember. It’s a reminder of how true civic technologies — solutions that address the nuance of public life, rather than a single political label — can help us each get where we want to go in an efficient, equitable, and empowering manner.