For the time being, we won't see drone delivery outside of a few very specialized use cases. 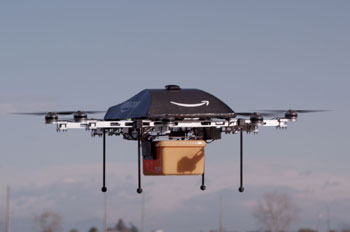 I read with some interest an article on the Robotenomics blog about the feasibility of drone delivery. It’s an interesting idea, and the article makes a better case than anything I’ve seen before. But I’m still skeptical.

The problem comes when he compares it to Amazon’s current shipping costs, of $2 to $8. But it sounds roughly like what Amazon pays to UPS or FedEx. And that’s not for delivering four pounds within a six-mile range. And it’s not just the fuel cost: it’s the entire cost, including maintenance, administrative overhead, executive bonuses, and (oh, yes) the driver’s salary.

I am not an expert, but if you throw in the cost of a drone pilot, repairs, delays (can drones fly in bad weather? I assume not) and distance, you’re going to get a number that’s much bigger than 10 cents. I know Amazon has a lot of warehouses, but I suspect — in fact, I know, from tracking my own deliveries — that most products travel a lot more than six miles. Getting the distance down would require more warehouses, which Amazon could certainly build should they decide that drone delivery is the way forward. But that’s a significant expense and raises its own inventory management problems.

The article estimates the current salary of a drone pilot at $100,000 per year, or roughly $50 per hour, not including benefits and overhead. If it takes 20 minutes to make a delivery at a 10-kilometer range, you can make three deliveries an hour, so that’s roughly $17 in personnel cost. (Three deliveries is six one-way trips, 12.4 miles total travel each trip, so the drone has to average roughly 36 miles per hour.) If you can make 10 deliveries an hour, that’s still $5 per delivery in personnel cost, and the drones need to travel roughly 120 miles per hour.

I’m not down on drone deliveries themselves, though there are plenty of concerns about navigation, coordination, and drone traffic (as the article in Robotenomics points out). The article mentions one particular use case: delivering medicine to a small island in the North Sea. That makes eminent sense. A 2-kilo package could easily be worth thousands, so you can afford relatively high shipping costs. The destination is relatively inaccessible, and deliveries are no doubt expensive: you aren’t going to send a DHL truck there on a regular route; you’re going to have to hire a ferry or charter an aircraft. I can easily imagine that it’s more effective (and less expensive) to send a drone than to charter a ferry, or wait for the next scheduled crossing.

Drones could also be useful as a kind of high-value, conspicuous consumption delivery service. Want the neighbors to see that you’re getting something cool? Have it delivered by drone, only $200 ($150 with Prime). Let the neighbors wonder about what it is. And though part of me gags as I write that, successful businesses have been built on much slimmer value propositions.

Drone delivery may eventually become commonplace. That depends a lot on how regulation shapes up: are autonomous drones allowed? At what altitudes can they fly? What’s the liability if one crashes while carrying your gold-plated, diamond-encrusted iWatch? But for the time being, I don’t think we’ll see drone delivery outside of a few very specialized use cases.