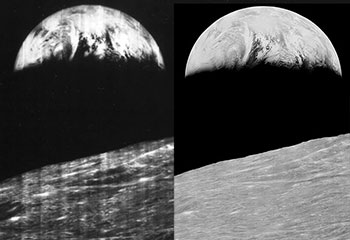 Before and after: The first “Earthrise” image, taken by the Lunar Orbiter 1 satellite and recovered by Dennis Wingo’s Lunar Orbiter Image Recovery Project. Credit: NASA/Skycorp Incorporated.

We’re kicking off our newest series, the O’Reilly Solid Podcast, with an episode recorded in the manager’s office of a McDonald’s at NASA’s Ames Research Center. David Cranor and I visited McMoon’s, as it’s known, to talk with Dennis Wingo, founder of two audacious “techno archaeology” efforts.

In the first episode, we discuss the Lunar Orbiter Image Recovery Project, which has rescued NASA’s first high-resolution images from satellites orbiting the moon. Dennis’ team reverse-engineered the extraordinary analog image transmission system that the satellites used in 1966 and 1967, digitized 14 tons of magnetic tape, and interpreted them to compose imagery at vastly higher resolution than NASA was originally able to recover from the satellites.

Before the invention of the charge-coupled device (CCD), collecting and transmitting images was an electro-mechanical enterprise. The process required to get images from the moon to the earth highlights the ingenuity of NASA’s early engineers — and the relative ease of working with electronics today, when crossing between physical and virtual is straightforward.

If you enjoy this episode, you’ll particularly want to hear episode three, which we’ll publish in two weeks. It covers Dennis’ second project: regaining control of an abandoned research satellite by broadcasting through the giant Arecibo Observatory. You’d also certainly enjoy our Solid Conference, focused on the intersection between software and the physical world.

We’ll publish episodes weekly, capturing conversations with the fascinating people we encounter as we assemble the program for Solid.

Some useful links related to this episode of the Solid Podcast:

The Solid Podcast is hosted by Jon Bruner and David Cranor, and focuses on the people, ideas, and technology that we feature at the O’Reilly Solid Conference. Episodes are edited by Brian Burge, with closing music by Thaddeus Bromstrup.