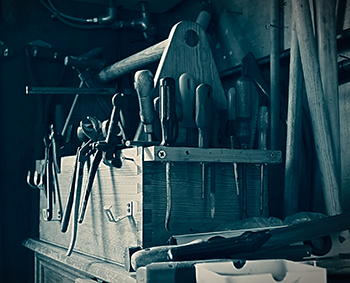 I recently connected with veteran designer Scott Jenson, who is currently developing the Physical Web Project with the Chrome team at Google. We’ve been talking quite a bit about empathy in the past few months here at O’Reilly, and Scott’s recent blog post, The Paradox of Empathy, caught my attention. I sat down with him to learn more about his thinking around empathy and to talk about his work on the Physical Web Project.

Empathy is part of every great designer’s toolkit

Jenson is often asked for recommendations for learning the next tool, or program. but as he explains, learning how to empathize is fundamental to product design:

He breaks empathy down into four components:

I basically take the whole design process from soup to nuts and break it up into four types of things, what I called understanding, bridging, flowing, and refining, which is a little bit of wordplay, but it was just really trying to say that most people talk about the icons and the buttons. That’s the last category, the refining. What I tried to do was to go back in time to get earlier and earlier interactions with people. So, the flowing is basically just how the whole program feels and what metaphors do you use, and how many steps do they take. It’s the level above the bits. Bridging was about matching the technology to the actual user needs. The most important one, the one that we actually tried to do the most when I was at Frog Design, was understanding, which was just to understand what people were doing, what were they up to, where they were at. In fact, to the point where you’re not even designing a product for them. One of the reasons why I think [The Paradox of Empathy] post got some positive response, was the fact that the first two were so clearly focused on user research.

And he acknowledges the importance of using data as a tool, but stresses there’s a time and place where it works best:

I think data is a very powerful tool. One of many tools that you can use, and it’s probably safe to say that if you are refining a product, data is very powerful. You can then say, do people click on this or this? Do they prefer this label or this label? What’s the completion rate? How do we improve conversion? All of those things can be answered very effectively with data, but if you are trying to figure out if it’s a good product, or if you’re trying to figure out what the user need is, or if you want to transform the product, then you’ve got to move a little bit further up the stack, and I don’t think data’s as valuable there.

The Physical Web Project: Taming the noise of the Internet of Things

The rapid increase in apps and connected devices ushered in by the Internet of Things is making our world distracting — and at times, just plain noisy. Jenson is currently working on the Physical Web Project, which provides services on demand. He explains it in more detail and comments on the misperceptions of the project:

The Physical Web was a project that came out of a very simple UX need. The fact that there are a lot of smart devices that are coming out, and all these smart devices right now have their own applications, and it’s just not going to scale. I don’t have anything against apps. I’m a big Web guy, and I’ve been involved with the Web for a long time. … I’m just referring to the fact that, if we believe in Moore’s Law at all, we’re going to have billions of these devices, and probably hundreds of them in our lives, at home but also in public places for transit or at the workplace. If you are going to have to have an app for every one of these things, it’s just not going to scale.

It was about trying to fix that problem. We’ve come up with a mechanism for devices to broadcast using a type of WiFi, but also Bluetooth Low Energy, and it can broadcast URLs. That way, on your phone, you can scan for everything in the environment and then list what’s nearby, and you can click on it. Because it’s the Web, it’s just a click. These devices are simple — this is not Photoshop; this is turning a light on. You just need a switch. The Web is perfect for this — you use it, you lose it, it’s gone. It’s a light-weight mechanism effective for interaction on demand. We want to walk up and use anything quickly. That’s it in a nutshell.

The first one I almost always get is that people worry that it’s going to be shout-y. We’ve already addressed that point and we’ve tried very hard not to do that.

The next one is that they’re so worried about tracking and that kind of thing … I have a post on my blog called “Beacon, Beacon Wherefore Art Thou Beacon?” where I address all the privacy issues in detail. Everything from how we’re not using scan response packets, so you can’t do MAC address tracking, to how we’re using a proxy server to make sure you can’t be fingerprinted, to making sure that we have an open source server so there can be multiple companies that are doing their own servers (that way you can move between different servers), to the fact that the whole thing is open source.

We are desperately trying to make this thing transparent and open, both in design and in source. In fact, I’ve even said that we would be thrilled if another company, another browser, another phone operating system would do the physical web first. We’d pop champagne corks if that happened. This needs to be, effectively, an equivalent technology in the browser, just like there’s multiple browsers today. That way, we hope people will understand that this is meant to be a very egalitarian thing, and people have a lot of choices. They don’t have to use any one particular company to make this work.

You can listen to the entire interview on the SoundCloud player above or on our SoundCloud stream.

Cropped image on article and category pages by florianric on Flickr, used under a Creative Commons license.