Turning a hobby into a company just got a lot easier.

Download a free copy of “Building a Hardware Business,” a curated collection of chapters from our IoT library. Editor’s note: this post is an excerpt from “The Hardware Startup,” by Renee DiResta, Brady Forrest, Ryan Vinyard, which is included in the curated collection. 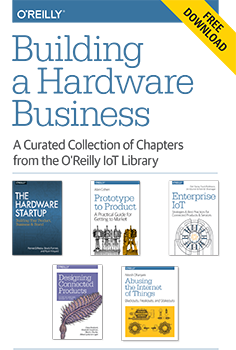 Over the past five years, we’ve begun to witness the emergence of Maker pros: entrepreneurs who started out as hobbyists and now want to turn their creations into full-fledged companies. The difference between a project and a product is the difference between making one and making many.

To turn a project into a company, the product has to be scalable. “Making many” has traditionally been a problem of cost and accessibility; it’s historically been both expensive and difficult to manufacture. Growing a company further requires keeping costs low enough to profit, setting up distribution channels, and managing fulfillment. Over the past few years, several trends have combined to create an environment that’s mitigated those problems. This has resulted in the growth of a hardware startup ecosystem.

Advances in rapid prototyping technologies have fundamentally changed the process of taking an idea from paper to the physical world. Hobbyist and prosumer-level 3D printers, CNC routers, and laser cutters have altered the landscape of personal fabrication, enabling quick and affordable iteration. While 3D printing has been around since the 1980s, the cost of a machine has dropped dramatically. Materials such as metals and ceramics enable higher-fidelity models. Cloud-based fabbing services, such as Ponoko and Shapeways, can produce a single prototype and ship it to you within a week — no need to own the printer yourself! Inexpensive boards (such as Arduino, Raspberry Pi, and BeagleBone) make electronics prototyping accessible to everyone. As interest in the Internet of Things has grown, products such as Spark Core and Electric Imp (startups themselves) have hit the market to make connected-device prototyping fast and easy. Simultaneously, computer-aided design (CAD) software has become more sophisticated, more affordable, and easier to use.

Just as the cost of major prototyping technologies has come down, component prices for sensors, batteries, and LEDs are also dramatically lower. Several early Maker businesses (MakerBot, Adafruit, SparkFun) are excellent resources for prototyping supplies and technologies. Ubiquitous smart devices have also had a dramatic impact on the hardware ecosystem. Global smartphone penetration is at 22%; within the United States, it’s at 56.5% and growing (and reaches as high as 70% in some countries). While this phenomenon is partially responsible for driving down the cost of component parts, the smartphone itself has also had a dramatic impact on hardware devices. It’s an increasingly common interface through which humans can interact with connected devices and wearables.

As machine costs have dropped, small-batch manufacturing has become increasingly feasible. The minimum number of units needed to secure a contract manufacturer used to be in the tens of thousands, but today’s factories are increasingly willing to do small-batch runs (sometimes in the hundreds of units). Small batches are one way that a fledgling hardware company can run lean. Even if software-style constant incremental iteration is still impossible, the amount of money lost to a bad run is considerably reduced. Increasing awareness of the growing manufacturing ecosystem in Shenzhen, and increased ease of sourcing via sites such as Alibaba and Taobao, has also opened up China as a viable option for smaller startups.

Open source hardware platforms are continuing to gain popularity, allowing entrepreneurs to build on top of them. Arduino, for example, eliminates the need to build a proprietary board during the early development phase. As of 2011, there were more than 300 open source hardware projects, and the number continues to increase. Engaged communities of contributors help accelerate innovation, and their accessibility and willingness to share knowledge draw in new Makers. This democratizes innovation. Open source can also be a business in itself. MakerBot and Arduino are thriving companies in their own right. By 2010, each already had over $1 million in revenue, and MakerBot was acquired by Stratasys in 2013 for $604 million. The Open Source Hardware Association (OSHWA) is the present-day voice of the open source hardware community. It works to advance the goals of collaborative learning and promoting the use of open source hardware.

In addition to generating awareness of the hardware space and helping people learn more effectively, community knowledge-sharing helps spread best practices and innovative ideas. Web-based communities such as Instructables and Thingiverse are geography agnostic; they enable people around the world to share their projects online and learn from others. Sometimes communities come together to contribute funding to a particular project. Crowdfunding platforms help founders leverage community support and bring products to market. While online communities can provide support and access to information, geographically concentrated local communities can help members overcome design and prototyping challenges by making access to expensive machinery much more feasible.

Hackerspaces (often called makerspaces if the primary focus is physical device hacking) are local hubs for hobbyists, crafters, and Maker pros alike to come together and build things. Beyond creating a welcoming physical space and facilitating collaborative serendipity, they often include shared tools and machines (similar to the MIT FabLab model). Some hackerspaces are simple community garages. Others, such as TechShop, involve paid memberships and offer courses for skill development. These spaces harness the power of sharing, creating an access-not- ownership model that makes even expensive professional-grade equipment relatively accessible. Over the past five years, makerspaces and hackerspaces have spread across the world. The Hackerspace wiki, which tracks spaces globally, lists over 1600 spaces. Many are primarily devoted to software, but a steadily increasing number focus on hardware.

Getting a device made is only the beginning of a successful hardware endeavor. To turn a project into a company still requires navigating fund-raising, inventory management, distribution, customer service, and more. New businesses are popping up that are specifically designed to help hardware startups navigate these challenges. Accelerators (Chapter 7) that traditionally offered funding, mentorship, and assistance to software companies are expanding into hardware. Hardware-specific programs are popping up, providing the specialized assistance necessary for startups to efficiently produce physical goods; some focus specifically on helping startups navigate manufacturing overseas. Fundraising platforms such as Kickstarter and Indiegogo can help entrepreneurs validate markets, raise money, and grow engaged communities. Once the product has been made, fulfillment-as-a-service shops enable entrepreneurs to offload some of the logistical challenges of warehousing, packing, and shipping. Distribution channels, such as Grand St (recently acquired by Etsy), Tindie, and ShopLocket, provide a means to easily reach consumers without needing to go through big-box retailers.

The “lean startup” and efficient entrepreneurship

The templatization of best practices for software startups has had a profound impact on entrepreneurship. The Lean Startup movement, introduced by Eric Ries in 2011, is a series of best practices designed to make starting a company a more feasible, less risky proposition for aspiring founders. Lean startups identify clear customer needs and incorporate customer feedback into the product design from day one, iterating rapidly to produce a truly useful product. They are strongly grounded in data-driven assessments of their offerings, using techniques such as A/B testing and closely monitoring actionable metrics.

While running a lean hardware startup is fairly challenging, the popularity of the movement has inspired thousands of individuals to think seriously about turning their project into a company. One of the core principles of the Web 2.0 movement was that everyone is capable of “being a creator.” Online, that spirit has been reflected in the rise of blogging, photo taking and sharing, pinning, tweeting, and creating Web content. In the physical world, “being a creator” means making physical goods. The Maker movement has increased the pervasiveness of the DIY spirit, facilitated easier access to information, and generated a supportive community that helps today’s founders get companies off the ground. It has helped millions of people realize that they, too, can hack the physical world. People start off small: they learn how to make one of something. But once they’ve made one, making many — and starting a company — no longer seems like an impossible task.