“The purpose of the IoT is to give humans superpowers”

Tim O’Reilly and Cory Doctorow talk about the opportunities and challenges presented by the Internet of Things. 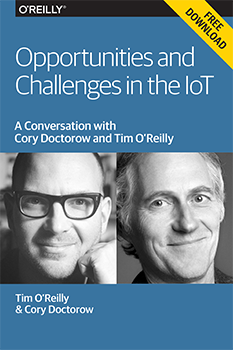 In a recent conversation, Tim O’Reilly and Cory Doctorow addressed a wide variety of issues surrounding the evolution of the Internet of Things. We’ve distilled their conversation into a free downloadable report, “Opportunities and Challenges in the IoT: A Conversation with Tim O’Reilly and Cory Doctorow,” in which they address questions from folks on Twitter about security, the impact of the IoT on industry, IoT innovation in the public sector, and much more.

Taking a look at industry, O’Reilly addressed a Twitter question from @leahthehunter regarding which companies and technologies are most profoundly impacting the evolution of the Internet of Things:

I think the biggest mistake people make with the Internet of Things is in thinking that it’s about devices. Sure, there are sexy devices: your Nest thermostat. Your Internet-connected drone, or whatever, and people go, ‘Oh, awesome.’ Yes, and there’s things like smart TVs, but the biggest impact to me seems to be when you start thinking about how sensors and devices can change the way you actually do things. … What really seems interesting is if you take Uber as a model of an Internet of Things company and use that as your icon rather than, say, Nest, you say, ‘Oh wait a minute — what’s really happening here is we’re saying once you have connectivity and sensors out in the world, you can actually completely rethink an industry.’

O’Reilly noted that the biggest opportunities in the IoT lie not in new devices but in rethinking user behavior to design better user experiences and increase value for users. Doctorow agreed, pointing out that he’s interested in the notion of “treating human beings as things that are good at sensing and not things that are there to be sensed.” Doctorow explained further:

A lot of our Internet of Things models proceed from the idea that a human emits a beacon and you gather as much information as you can — often in a very adversarial way — about that human, and then you make predictions about what that human wants, and then you alert them. What if instead you had a device or a device ecosystem that was local to you, that didn’t share your information with anyone else, that gathered information that you gave voluntarily because it was just for your own benefit — myware, not spyware.

Then, as you moved through the world, other things emitted information about themselves. Your device took them in, looked at your very intimate, not-for-sharing preferences, and presented you with options, rather than treating you as an ambulatory wallet to try and game into admitting dollars. If you think about every offer that every business that you pass today might make to you, it adds up to a gig or two. We can handle that in our sleep. Why are we trying to tailor which information comes to you? Why aren’t they all promiscuously broadcasting, then you receive them and filter them at your end using your device that can keep your secrets for you?

O’Reilly agreed and expanded on that, saying, in his view, “the purpose of the Internet of Things is to give humans superpowers,” pointing to such technologies as GPS and early work in augmented reality from companies like DAQRI and projects such as HoloLens.

You can can download the free report here, or watch the conversation in its entirety in the video below.