One of the fascinating things found in nature is the ability of a species to adapt to its changing environment. The canonical example of this is Britain’s Peppered Moth. When newly industrialized Great Britain became polluted in the nineteenth century, slow-growing, light-colored lichens that covered trees died and resulted in a blackening of the trees bark. The impact of this was quite profound: lightly-colored peppered moths, which historically had been well camouflaged and the majority, now found themselves the obvious target of many a hungry bird. Their rare, dark-colored sibling, who had been conspicuous before, now blended into their recently polluted ecosystem. As the birds, changed from eating dark-colored to light-colored moths, the previously common light-colored moth became the minority, and the dynamics of Britain’s moth population changed.

So what do moths have to do with programming? END_OF_DOCUMENT_TOKEN_TO_BE_REPLACED

4 ways the Raspberry Pi is being used in education

Get inspired to create, teach, and learn with the Raspberry Pi.

The Raspberry Pi is a small computer that can be used for a variety of projects, and has been heralded as a great boon to education due to its flexibility and simplicity. While PcPro magazine noted in January of 2014 that Pi’s were “gathering dust” in classrooms, production has not ceased. The usage map is pretty impressive and the Raspberry Pi 2 was recently released.

In February of this year, the Raspberry Pi Foundation announced that they’re starting a mentoring program for people 16-21 years old. Here are four other ways that the Pi is being used in education and growing the tech community.

END_OF_DOCUMENT_TOKEN_TO_BE_REPLACED

Improve your odds with the lingua franca of computing.

You have a lot of choices when you’re picking a programming language to learn. If you look around the web development world, you’ll see a lot of JavaScript. At universities and high schools, you’ll often find Python used as a teaching language. If you go to conferences with language theorists, like Strange Loop, you’ll hear a lot about functional languages, such as Haskell, Scala, and Erlang. This level of choice is good: many languages mean that the overall state of the field is continually evolving, and coming up with new solutions. That choice also leads to a certain amount of confusion regarding what you should learn. It’s not possible to learn every language out there, even if you wanted to. Depending on the area you’re in, the choice of language may be made for you. For the overall health of your career, and to provide you the widest range of future opportunities, the single most useful language-related thing you can do is learn a C-style language.

A boring old C-style language just like millions of developers learned before you, going back to the 1980s and earlier. It’s not flashy, it’s usually not cutting edge, but it is smart. Even if you don’t stick with it, or program in it on a daily basis, having a C-style language in your repertoire is a no-brainer if you want to be taken seriously as a developer.
END_OF_DOCUMENT_TOKEN_TO_BE_REPLACED

You might have heard the news that .NET is open source. In this post I’m going to explain what exactly we open sourced, why we did it, and how you can get involved.

If you’re not familiar with .NET, it’s a managed execution environment that provides a variety of services to its running applications including things like automatic memory management, type safety, native interop, and multiple modern programming languages that make it easier to build all kinds of apps, for nearly any device, quickly. The first version of .NET was initially released in 2002 and quickly picked up steam in many businesses. Today there are over 1.8 billion active installs of the .NET Framework and 6 million .NET developers in the world.

The .NET Framework consists of these major components: the common language runtime (CLR), which is the execution engine that handles running applications; the .NET Framework Base Class Libraries (BCL), which provides a library of tested, reusable code that developers can call from their own applications; and the managed languages and compilers for C#, F#, and Visual Basic. Application models extend the common libraries of the .NET Framework to provide additional libraries that developers can use to build specific types of applications, like web, desktop, mobile device apps, etc. For more information on all the components in .NET 2015 see: Understanding .NET 2015.

There are multiple implementations of .NET, some from Microsoft and others from other companies or open source projects. In this post, I’ll focus on .NET Core from Microsoft.

END_OF_DOCUMENT_TOKEN_TO_BE_REPLACED

The art of design patterns 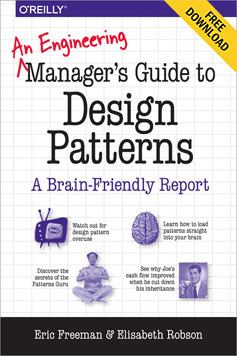 Download a free copy of An Engineering Manager’s Guide to Design Patterns, a brain-friendly report that shows you how object-oriented design patterns are ideal for solving specific problems in application design.

If you haven’t had the pleasure of viewing Hal Abelson & Gerald Sussman’s 1986 MIT introductory computer science course, you owe it to yourself to set aside a few hours to view it. “1986?”, you say — “Could that really be relevant to my work today?” Unless you came through MIT or a similar program that teaches from their seminal book The Structure and Interpretation of Computer Programs, I’d bet you are most likely going to learn a few new things (even if you consider yourself a seasoned software developer).

Anyone who has ever been late on a software development project (who hasn’t?) can relate to this. Software development starts to feel more like an art or craft when the best you can do is roughly estimate the size and scope of a job and then cross your fingers and hope for the best — certainly, it is at times like these when our field doesn’t feel like much of a science. And, for anyone who has worked on a project of moderate size, at some point you find complexity staring you in the face. All too often our first designs, and our code, turn into the dreaded big ball of mud (yes, that is a technical term).
END_OF_DOCUMENT_TOKEN_TO_BE_REPLACED

Meg Blanchette interviews Continuum's Peter Wang about the growing role of OSS in the enterprise.

If you attend OSCON this year, you may notice a bit more attention paid to the enterprise side of tech. That is on purpose, as we have been noticing the open source and enterprise worlds edging closer and closer. Companies traditionally nervous about open source are either recognizing the inherent value, or their developers are using it and they don’t even realize. Open source is, in turn, seeing the benefits an established company can bring a project and the various opportunities available.

In that spirit, I spoke with Peter Wang, from Continuum Analytics. Continuum is a good example of this new hybrid — offering open source technology, while also having an enterprise side. Here, we discuss the changing landscape and what that can mean for people who embrace change, and for those who don’t.