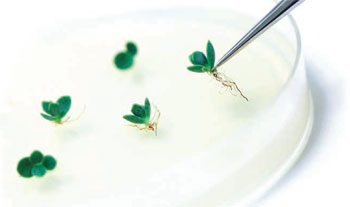 “Moreover, it’s extremely difficult to ‘improve’ on the lethality of nature,” says Oliver Medvedik, a visiting assistant professor at The Cooper Union for the Advancement of Science and Art and the assistant director of the Maurice Kanbar Center for Biomedical Engineering. “The pathogens that already exist are more legitimate cause for worry.” END_OF_DOCUMENT_TOKEN_TO_BE_REPLACED

Advances in biology and biotechnology are driving us in exciting new directions — be part of the revolution!

We’re excited about the third issue of BioCoder, O’Reilly’s newsletter about the revolution in biology and biotechnology. In the first article of our new issue, Ryan Bethencourt asks the question “What does Biotechnology Want?” Playing with Kevin Kelly’s ideas about how technological development drives human development, Bethencourt asks about the directions in which biotechnology is driving us. We’re looking for a new future with significant advances in agriculture, food, health, environmental protection, and more.

That future will be ours — if we choose to make it. Bethencourt’s argument (and Kelly’s) is that we can’t not choose to make it. Yes, there are plenty of obstacles: the limits to our understanding of biology and genetics, the inadequate tools we have for doing research, the research institutions themselves, and even fear of the future. We’ll overcome these obstacles; indeed, if Bethencourt is right, and biology is our destiny, we have no choice but to overcome these obstacles. The only question is whether you’re part of the revolution or not.
END_OF_DOCUMENT_TOKEN_TO_BE_REPLACED

In the future, we will solve biological problems by running experiments in parallel.

In my post on biohacking and bioterrorism, I briefly mentioned the possibility of vaccines and other treatments developed outside of institutional research. That may be far-fetched, and I certainly hope we’re never in a situation where DIY treatments are the only ones available. But it is worth looking at how biologists outside of medical institutions are transforming research.

Perhaps the most ambitious project right now is Synbiota’s #ScienceHack. They are organizing a large number of volunteer groups to experiment with techniques to produce the compound Violacein. Violacein is potentially useful as an anti-cancer and anti-dysentery drug, but currently costs $356,000 per gram to produce. This price makes research (to say nothing of therapeutic use) impossible. However, it’s possible that bacteria can be genetically engineered to produce Violacein much more efficiently and cheaply. That’s what the #ScienceHack experiment is about: the groups will be trying to design DNA that can be inserted into E. coli bacteria to make it produce Violacein at a fraction of the cost. END_OF_DOCUMENT_TOKEN_TO_BE_REPLACED

The potential for synthetic biology and biotechnology is vast; we all have an opportunity to create the future together.

What is biocoding? For those of you who have been following the biotechnology industry, you’ll have heard of the rapid advances in genome sequencing. Our ability to read the language of life has advanced dramatically, but only recently have we been able to start writing the language of life at scale.

The first large-scale biocoding success was in 2010, when Craig Venter (one of my scientific heroes) wrote up the genome of an entirely synthetic organism, booted it up and created de novo life. Venter’s new book, Life at the Speed of Light, discusses the creation of the first synthetic life form. In his book and in video interviews, Venter talks about the importance of ensuring the accuracy of the DNA code they designed. One small deletion of a base (one of the four letters that make up the biological equivalent of 1s and 0s) resulted in a reading frame shift that left them with gibberish genomes, a mistake they were able to find and correct. One of the most amusing parts of Venter’s work was that they were able to encode sequences in the DNA to represent each letter of the English alphabet. Their watermark included the names of their collaborators, famous quotes, an explanation of the coding system used, and a URL for those who crack the code written in the DNA. Welcome to the future — and let me know if you crack the code!

Biocoding is just the beginning of the rise of the true biohackers. This is a community of several thousand people, with skill sets ranging from self-taught software hackers to biology postdocs who are impatient with the structure of traditional lab work. END_OF_DOCUMENT_TOKEN_TO_BE_REPLACED

As the United States military marches further into the age of networked warfare, data networks and the mobile platforms to distribute and access them will become even more important.

This fall, the (retired) eighth Vice Chairman of the Joint Chiefs of Staff described a potential future of the military that’s founded not only in open source thinking, but in next-generation user interfaces and biohacking straight out of science fiction. If even some of the strategic thinking he described at this year’s Military Open Source Conference in D.C. is applied to how the technology that supports the next generation of war fighters is built, dramatic evolutionary changes could cascade down the entire supply chain of one of the world’s biggest organizations.

In his remarks, James E. “Hoss” Cartwright, a four-star general who retired from the United States Marine Corps in August 2011, outlined a strategic need to make military technology more modular, based upon open standards and adaptable on the battlegrounds of the future.

Cartwright, the first holder of the Harold Brown Chair in Defense Policy Studies for the Center for Strategic & International Studies, a member of the Defense Policy Board Advisory Committee, and an adviser to several corporate entities in the defense industry, is well placed to have an informed and influential opinion.

Over the course of his talk at the Military Open Source Conference, Cartwright outlined how open source software models could be applied to hardware, making vehicles into adaptable platforms for different missions, not vertically integrated programs that can take a decade or longer to design, build or change. END_OF_DOCUMENT_TOKEN_TO_BE_REPLACED

To eat or be eaten?

One of Marc Andreessen’s many accomplishments was the seminal essay “Why Software is Eating the World.” In it, the creator of Mosaic and Netscape argues for his investment thesis: everything is becoming software. Music and movies led the way, Skype makes the phone company obsolete, and even companies like Fedex and Walmart are all about software: their core competitive advantage isn’t driving trucks or hiring part-time employees, it’s the software they’ve developed for managing their logistics.

I’m not going to argue (much) with Marc, because he’s mostly right. But I’ve also been wondering why, when I look at the software world, I get bored fairly quickly. Yeah, yeah, another language that compiles to the JVM. Yeah, yeah, the Javascript framework of the day. Yeah, yeah, another new component in the Hadoop ecosystem. Seen it. Been there. Done that. In the past 20 years, haven’t we gained more than the ability to use sophisticated JavaScript to display ads based on a real-time prediction of the user’s next purchase?

When I look at what excites me, I see a much bigger world than just software. I’ve already argued that biology is in the process of exploding, and the biological revolution could be even bigger than the computer revolution. I’m increasingly interested in hardware and gadgetry, which I used to ignore almost completely. And we’re following the “Internet of Things” (and in particular, the “Internet of Very Big Things”) very closely. I’m not saying that software is irrelevant or uninteresting. I firmly believe that software will be a component of every (well, almost every) important new technology. But what grabs me these days isn’t software as a thing in itself, but software as a component of some larger system. The software may be what makes it work, but it’s not about the software. END_OF_DOCUMENT_TOKEN_TO_BE_REPLACED

As the book documents, we’re in the middle of an exponential increase in genomics capabilities that dwarfs even the pace of change in the computer industry. In such a rapidly changing field if you can imagine a plausible technical approach to a problem, no matter how difficult or cumbersome it may be, then soon it’s likely to become easy. END_OF_DOCUMENT_TOKEN_TO_BE_REPLACED