Charles Fracchia on a new breed of biologists

The O’Reilly Hardware Podcast: The merging worlds of software, hardware, and biology. 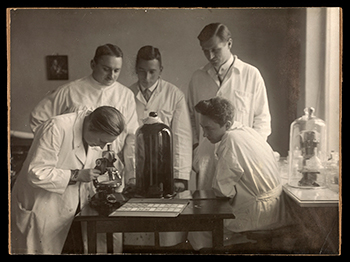 In this new episode of the Hardware Podcast—which features our first discussion focusing specifically on synthetic biology—David Cranor and I talk with Charles Fracchia, an IBM Fellow at the MIT Media Lab and founder of the synthetic biology company BioBright.

END_OF_DOCUMENT_TOKEN_TO_BE_REPLACED

Tim O’Reilly subjected himself to an engaging Ask Me Anything session on Reddit earlier this week. The focus of the exchange was the Internet of Things, in anticipation of our Solid conference taking place next month.

We’re always listening for faint signals from our community about what they’re getting interested in, and one area that’s stood out to us is biology, which is becoming easier to experiment with at home, as a hobbyist, and through hackerspaces like Biocurious and Genspace. You’ll find a few threads on biology at Solid this year, but we’ve tagged it to be a little more central at Solid 2015. Beyond the hobbyist and health-related applications, we see synthetic biology as another way to translate between virtual and physical, like 3D printers and stereoscopic cameras.

Here’s an exchange from Tuesday’s Reddit thread that sums it up nicely.

What prompted the start of BioCoder? Are people really doing biotech in their garages in the same way that many computer hardware and software innovations happened?

END_OF_DOCUMENT_TOKEN_TO_BE_REPLACED

Podcast: what makes a scientist?

How scientists become scientists, whether science is still advancing at Newton's pace, and the future of neuroscience and bioengineering.

At Sci Foo Camp last weekend, we enjoyed sitting down with several thoughtful scientists and thinkers-about-science to record a few podcast episodes. Here we speak with Tom Daniel, a professor of biology, computer science, and neurobiology at the University of Washington, and Ben Lillie, co-founder of The Story Collider and a Stanford-trained physicist. First topic: what brings people to science, and how we compare to our icons. Along the way, we mention Hans Bethe, Isaac Newton’s epitaph, and John McPhee’s trip across Interstate 80.

We’ll post the rest of the series over the coming weeks. In the meantime, you can find more episodes of our podcast and subscribe on iTunes or SoundCloud.

As the book documents, we’re in the middle of an exponential increase in genomics capabilities that dwarfs even the pace of change in the computer industry. In such a rapidly changing field if you can imagine a plausible technical approach to a problem, no matter how difficult or cumbersome it may be, then soon it’s likely to become easy. END_OF_DOCUMENT_TOKEN_TO_BE_REPLACED

Biohacking: The next great wave of innovation

The hacker culture that launched the computing revolution is now taking root in the bio space.

I’ve been following synthetic biology for the past year or so, and we’re about to see some big changes. Synthetic bio seems to be now where the computer industry was in the late 1970s: still nascent, but about to explode. The hacker culture that drove the development of the personal computer, and that continues to drive technical progress, is forming anew among biohackers.

Computers certainly existed in the ’60s and ’70s, but they were rare, and operated by “professionals” rather than enthusiasts. But an important change took place in the mid-’70s: computing became the domain of amateurs and hobbyists. I read recently that the personal computer revolution started when Steve Wozniak built his own computer in 1975. That’s not quite true, though. Woz was certainly a key player, but he was also part of a club. More important, Silicon Valley’s Homebrew Computer Club wasn’t the only one. At roughly the same time, a friend of mine was building his own computer in a dorm room. And hundreds of people, scattered throughout the U.S. and the rest of the world, were doing the same thing. The revolution wasn’t the result of one person: it was the result of many, all moving in the same direction.

Biohacking has the same kind of momentum. It is breaking out of the confines of academia and research laboratories. There are two significant biohacking hackerspaces in the U.S., GenSpace in New York and BioCurious in California, and more are getting started. Making glowing bacteria (the biological equivalent of “Hello, World!”) is on the curriculum in high school AP bio classes. iGem is an annual competition to build “biological robots.” A grassroots biohacking community is developing, much as it did in computing. That community is transforming biology from a purely professional activity, requiring lab coats, expensive equipment, and other accoutrements, to something that hobbyists and artists can do.

As part of this transformation, the community is navigating the transition from extremely low-level tools to higher-level constructs that are easier to work with. When I first leaned to program on a PDP-8, you had to start the computer by loading a sequence of 13 binary numbers through switches on the front panel. Early microcomputers weren’t much better, but by the time of the first Apples, things had changed. DNA is similar to machine language (except it’s in base four, rather than binary), and in principle hacking DNA isn’t much different from hacking machine code. But synthetic biologists are currently working on the notion of “standard biological parts,” or genetic sequences that enable a cell to perform certain standardized tasks. Standardized parts will give practitioners the ability to work in a “higher level language.” In short, synthetic biology is going through the same transition in usability that computing saw in the ’70s and ’80s. END_OF_DOCUMENT_TOKEN_TO_BE_REPLACED