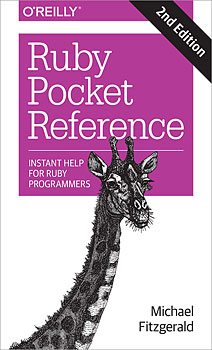 END_OF_DOCUMENT_TOKEN_TO_BE_REPLACED

Never forget to clean up again!

Previous posts in this series used Ruby blocks to iterate over the items in a collection. We’re going to wrap up by showing a very different side of blocks – resource allocation and cleanup.

Here we have a Ruby class representing a refrigerator. Prior to accessing a refrigerator object’s contents via its `contents` method, you have to call its `open` method to open the door. (Sensible enough.) END_OF_DOCUMENT_TOKEN_TO_BE_REPLACED

Last time, we showed you how to use Ruby’s each method with blocks to process the elements of an array, and how it can save you a lot of repetitive looping code. That was just an introduction, though.

In our previous examples, the block was a final destination. We passed data into blocks, but it never came back out (unless we printed it to the screen). Today we’re going to look at block return values, and how your methods can use them to manipulate your data in even more powerful ways.

Before we move on…

We should mention that there are two syntaxes for blocks in Ruby. In the earlier post, we used the do ... end syntax:

With blocks that fit on one code line, it’s often preferred (though not required) to use the alternate curly-brace syntax for blocks:

We’ll be using the curly-brace style of blocks today.

END_OF_DOCUMENT_TOKEN_TO_BE_REPLACED

It seems like more and more languages these days are getting support for closures in one form or another. (Even Java is getting in on the game, finally.) Ruby has had closure-like structures called blocks since its early days, though, and they’re central to the language. Used properly, they can reduce repetition and even make coding less error-prone. Understanding blocks can give you some great ideas to take home to your language of choice. (Or, who knows? Maybe you’ll decide you like coding in Ruby better!)

Today, we’re going to show you just one of the many Ruby methods that use blocks: each. We’ll show you some repetitive code that, in most languages, would be hard to refactor. But using each, we’ll quickly wring that repetition out.

END_OF_DOCUMENT_TOKEN_TO_BE_REPLACED

Blocks are the way to go

Because so much of iOS programming involves the delegate pattern (the UITableViewDelegate being a prime example), it’s natural that when programmers are developing their own classes that need to be able to asynchronously call back to a client class, they would use the delegate pattern as well. The problem with delegates is that they are fairly inflexible. For example, let’s consider the following (totally inappropriate) use of a delegate:

The problem lies when you need to call this method twice from the same class.

So far, so good, but what happens if you want to have a second method in the same class call multiply? You can only have a single delegate method, so you have to start jumping through hoops to let the delegate method know where to put the resulting value.

The modern solution to this is to use blocks. People tend to shy away from them, because the syntax is a bit arcane and un-Objective-C, but they are incredibly powerful, and Apple has signaled that they are the future, by starting to use them heavily in areas such as animation.
END_OF_DOCUMENT_TOKEN_TO_BE_REPLACED