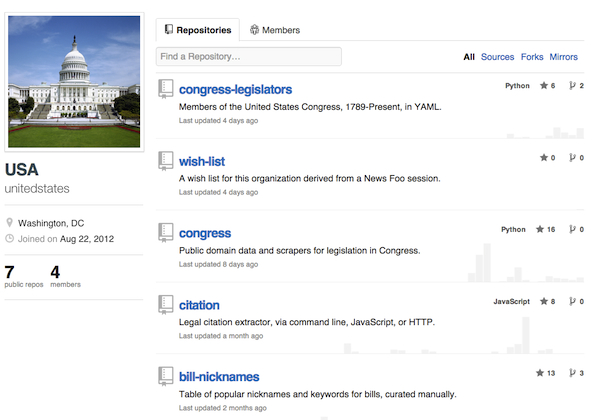 If the People’s House is going to become a platform for the people, it will need to release its data to the people. If Congressional leaders want THOMAS.gov to be a platform for members of Congress, legislative staff, civic developers and media, the Library of Congress will need to release structured legislative data. THOMAS is also not updated in real-time, which means that there will continue to be a lag between a bill’s introduction and the nation’s ability to read the bill before a vote. END_OF_DOCUMENT_TOKEN_TO_BE_REPLACED

On the other hand, the new Congress.gov beta has yet to realize the potential of Congress publishing bulk open legislative data. There is no application programming interface (API) for open government developers to build upon. In many ways, the new Congress.gov replicates what was already available to the public at sites like Govtrack.us and OpenCongress.org. END_OF_DOCUMENT_TOKEN_TO_BE_REPLACED

END_OF_DOCUMENT_TOKEN_TO_BE_REPLACED

Passage of CISPA in the U.S. House highlights need for viable cybersecurity legislation

The passage of the Cyber Intelligence Sharing and Protection Act (CISPA) in the U.S. House of Representatives has raised grave concerns about is potential effect on digital privacy and civil liberties.

The week the web changed Washington

Collective action channeled through the Internet halted the progress of SOPA and PIPA this week. The promise of these communication tools has come of age, and they'll be sorely needed to face the challenges of the 21st century.

What happens when an old law is updated for the digital age?

Can the People's House become a social platform for the people?

The combined potential of social media and legislative data took the stage at the first congressional hackathon.

Leaders of the House of Representatives met with Facebook developers and open government advocates to talk about how technology can improve the legislative process. New prototype apps hint at the future that awaits the "People's House" in the 21st century.

In a time when the American economy needs to catalyze innovation to compete in a global marketplace, members of the United States Congress have advanced legislation that could cripple the Internet industry, damage cybersecurity and harm freedom of expression online.

Testimony from government officials and a consumer watchdog before Congress highlighted how social media is affecting government, including the changing nature of official records in the digital age.