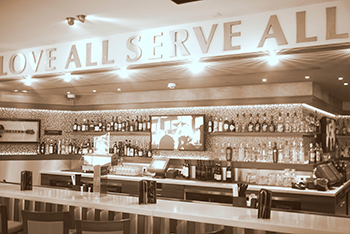 END_OF_DOCUMENT_TOKEN_TO_BE_REPLACED

Tips on how to build effective human-machine hybrids, from crowdsourcing expert Adam Marcus. 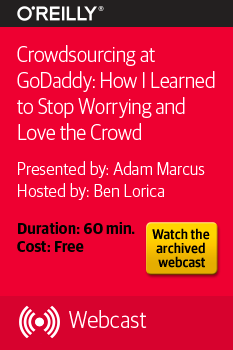 In a recent O’Reilly webcast, “Crowdsourcing at GoDaddy: How I Learned to Stop Worrying and Love the Crowd,” Adam Marcus explains how to mitigate common challenges of managing crowd workers, how to make the most of human-in-the-loop machine learning, and how to establish effective and mutually rewarding relationships with workers. Marcus is the director of data on the Locu team at GoDaddy, where the “Get Found” service provides businesses with a central platform for managing their online presence and content.

In the webcast, Marcus uses practical examples from his experience at GoDaddy to reveal helpful methods for how to:

What to do when humans get it wrong

Data scientists were among the earliest and most enthusiastic users of crowdsourcing services. Lukas Biewald noted in a recent talk that one of the reasons he started CrowdFlower was that as a data scientist he got frustrated with having to create training sets for many of the problems he faced. More recently, companies have been experimenting with active learning (humans1 take care of uncertain cases, models handle the routine ones). Along those lines, Adam Marcus described in detail how Locu uses Crowdsourcing services to perform structured extraction (converting semi/unstructured data into structured data).

Another area where crowdsourcing is popping up is feature engineering and feature discovery. Experienced data scientists will attest that generating features is as (if not more) important than choice of algorithm. Startup CrowdAnalytix uses public/open data sets to help companies enhance their analytic models. The company has access to several thousand data scientists spread across 50 countries and counts a major social network among its customers. Its current focus is on providing “enterprise risk quantification services to Fortune 1000 companies”.

CrowdAnalytix breaks up projects in two phases: feature engineering and modeling. During the feature engineering phase, data scientists are presented with a problem (independent variable(s)) and are asked to propose features (predictors) and brief explanations for why they might prove useful. A panel of judges evaluate2 features based on the accompanying evidence and explanations. Typically 100+ teams enter this phase of the project, and 30+ teams propose reasonable features.