Even as the bust set in, specialization remained the trend because Web projects — especially on the server side — had grown far more complicated. They weren’t just a server and a few scripts, but a complete stack, including templates, logic, and usually a database. Whether you preferred the LAMP stack, a Microsoft ASP stack, or perhaps Java servlets and JSP, the server side rapidly became its own complex arena. Intranet development in particular exploded as a way to build server-based applications that could (cheaply) connect data sources to users on multiple platforms. Writing web apps was faster and cheaper than writing desktop apps, with more tolerance for platform variation.
END_OF_DOCUMENT_TOKEN_TO_BE_REPLACED

You know the graph. Use it to provide a more human experience.

I finally got around to looking at my personal network graph on Linkedin Labs the other day. It was a fun exercise and I got at least one interesting insight from it.

Take a look at these two well defined and distinct clusters in my graph. These are my connections with the startup I worked for (blue) and the company that acquired us in 2008 (orange). It is fascinating to me that all these years later the clusters remain so disconnected. There are shared connections within a common customer base, but very few direct connections across the clusters. I would love to see maps from some of my other colleagues who are still there to see if theirs show the same degree of separation. This was an acquisition that never really seemed to click and whether this is a picture of cause or effect, it maps to my experiences living in it. 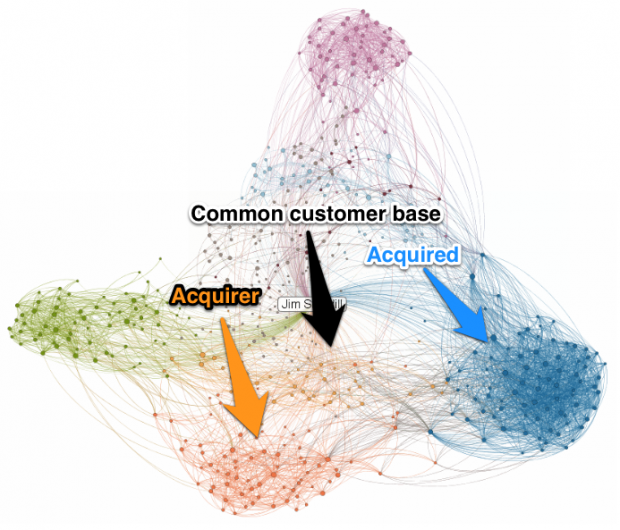 That’s an aside though. What this graph really puts in stark relief is what every social network out there is learning about us. And this graph doesn’t really tell the whole story because it doesn’t represent edge weights and types, which they also know. Social networks know who we connect with, who we interact with, and the form and strength of those interactions.

But this post isn’t a privacy rant. I know they know this stuff and so do you. What this image got me thinking about again is why social networks aren’t using this information to create for us a social experience that is more like our real world, and frankly more in tune with our human-ness. END_OF_DOCUMENT_TOKEN_TO_BE_REPLACED

The dilemma of authentic learning: Do you destroy what you measure?

The challenge of translating the educational benefits of making.

Making and education clearly go hand in hand, but how do we quantify and share the results of authentic learning without losing its essence? That's the issue educators are currently facing.

The end of social

When you take the friction out of sharing, you also remove the value.

If you want to tell me what you listen to, I care. But if sharing is nothing more than a social application feed that's constantly updated without your volition, then it's just another form of spam.

An On-Demand Night at the Opera

The Metropolitan Opera is letting its inner geek run free. Performances will soon be available as pay-per-stream feeds and subscription packages through The Met's Web site. From the New York Times: For $3.99 or $4.99 per streamed opera, users will have a six-hour window in which to listen to or watch a production, once it has started. A monthly…

Reinventing the Book and Killing It are Separate Things

Columnist Richard Cohen is overestimating the threat of digital books.

The Living Library project flips the reader-book dynamic on its head by allowing library patrons to "check out" human beings, and then engage in a civil dialogue. Nina Simon from Museum 2.0 extends the Living Library structure to a reimagining of museums: How could visitors' stereotypes about museum behavior and the kinds of activities available in museums be exploited to…