Software developers and hardware engineers team up with biologists to address laboratory inefficiencies.

Download a free copy of the new edition of BioCoder, our newsletter covering the biological revolution.

Following the Synthetic Biology Leadership Excellence Accelerator Program (LEAP) showcase, I met with fellows Mackenzie Cowell, co-founder of DIYbio.org, and Edward Perello, co-founder of Desktop Genetics. Cowell and Perello both wanted to know what processes in laboratory research are inefficient and how we can eliminate or optimize them.

One solution we’re finding promising is pairing software developers and hardware engineers with biologists in academic labs or biotech companies to engineer small fixes, which could result in monumental increases in research productivity.

An example of an inefficient lab process that has yet to be automated is fruit fly — Drosophila — manipulation. Drosophila handling and maintenance is laborious, and Dave Zucker and Matt Zucker from Flysorter are developing a technology using computer vision and machine learning software to automate these manual tasks; the team is currently engineering prototypes. This is a perfect example of engineers developing a technology to automate a completely manual and extremely tedious laboratory task. Check them out, and stay tuned for an article from them in the October issue of BioCoder. END_OF_DOCUMENT_TOKEN_TO_BE_REPLACED

“After building that system internally for three years, we looked at it and realized that every aspect of a life sciences laboratory had been encapsulated in both hardware and software, and that that was too valuable a tool to just keep internally at Emerald for our own research efforts. Around this time last year, we decided that we wanted to offer that as a service, that other scientists, companies, and researchers could use to run their experiments as well.” END_OF_DOCUMENT_TOKEN_TO_BE_REPLACED 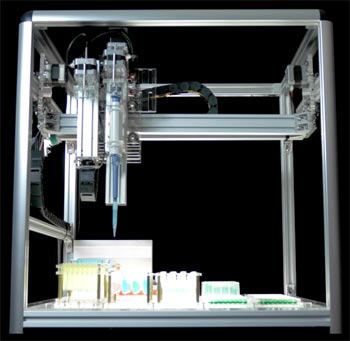 A programming language for scientific experiments is important for many reasons. Most simply, a scientist in training spends many, many hours of time learning how to do lab work. That sounds impressive, but it really means moving very small amounts of liquid from one place to another. Thousands of times a day, thousands of days in preparation for a career. It’s boring, dull, and necessary work, and something that can be automated. Biologists should spend most of their time thinking about biology, designing experiments, and analyzing results — not handling liquids. END_OF_DOCUMENT_TOKEN_TO_BE_REPLACED