Apple Watch and the skin as interface

The success of Apple’s watch, and of wearables in general, may depend on brain plasticity.

Recently, to much fanfare, Apple launched a watch. Reviews were mixed. And the watch may thrive — after all, once upon a time, nobody knew they needed a tablet or an iPod. But at the same time, today’s tech consumer is markedly different from those at the dawn of the Web, and the watch faces a different market all together. 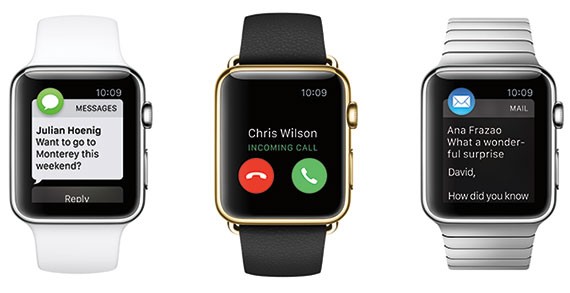 One of the more positive reviews came from tech columnist Farhad Manjoo. In it, he argued that we’ll eventually give in to wearables for a variety of reasons.

“It was only on Day 4 that I began appreciating the ways in which the elegant $650 computer on my wrist was more than just another screen,” he wrote. “By notifying me of digital events as soon as they happened, and letting me act on them instantly, without having to fumble for my phone, the Watch became something like a natural extension of my body — a direct link, in a way that I’ve never felt before, from the digital world to my brain.”

Manjoo uses the term “on-body messaging” to describe the variety of specific vibrations the watch emits, and how quickly he came to accept them as second nature. The success of Apple’s watch, and of wearables in general, may be due to this brain plasticity. END_OF_DOCUMENT_TOKEN_TO_BE_REPLACED