Personal wellness data should be shared as freely as water and air.

Register for the free webcast, “Life Streams, Walled Gardens, and the Internet of Living Things.” Brigitte Piniewski and Hagen Finley will discuss the Internet of Living Things, what makes sensoring and monitoring data emanating from our bodies unique, and why we should elect to participate in this seemingly Orwellian mistake of open-sourcing our personal health data.

We are at a threshold in the history of personal data. Sensors and apps are making it possible to generate digital data signatures of important aspects of healthy living, such as movement, nutrition, and sleep. However, we are rapidly losing the opportunity to erect a Linux-like open “living-well” data system steeped in open commons principles. We can either join together to ensure enlightened open source and crowdsourced discovery practices become the norm for our living-well data footprints, or we can passively allow this data to be sequestered into one of the walled gardens offered by health systems, funded research, or big business.

Why this is important?

Living-well data provides the map by which vast amounts of preventable human suffering can be prevented. Everyone can benefit from the health journeys of those who lived before us because our modern societies are no longer “accidentally well.” Decades ago, parents had no need to question the nutrition a child was offered or concern themselves with how much activity a child engaged in. No deliberate use of devices was needed to track these important health contributors. Reasonable access to whole foods (farm foods) and reasonable amounts of activity were provided, as it were, by default — in other words, by accident. This resulted in remarkably low rates of chronic disease. Today, communities cannot take those healthy choices for granted — we are no longer accidentally well. END_OF_DOCUMENT_TOKEN_TO_BE_REPLACED

What the data world can learn from the fashion industry

How generating conversations can become one of the most important data assets for any organization. 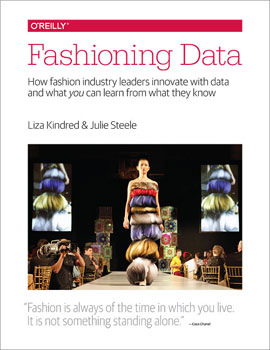 At O’Reilly Research, we focus our attention on trends in technology adoption — which tools are adopted and in which industries. In doing so, we uncover interesting cross-disciplinary opportunities and discover what we can learn from innovations in other fields.

We’ve recently learned about the increasing role of data in the fashion industry, so we set out to uncover some of the players who are making disruptive changes using technology and analytics.

Our team asked Liza Kindred, founder of Third Wave Fashion, and Julie Steele, coauthor of Beautiful Visualization and Designing Data Visualizations, to take a closer look at these developments in their new report, “Fashioning Data: How fashion industry leaders innovate with data and what you can learn from what they know.” We think you’ll find some surprising applications of data and analytics in the fashion industry — applications that are useful regardless of the industry or organization you work within. And, we know we’re just at the beginning of what is likely a growing trend. END_OF_DOCUMENT_TOKEN_TO_BE_REPLACED

If you want to engage with the data that's surrounding you, Mining the Social Web is the best place to start.

While we’re seeing more and more cynicism about the value of data, and particularly “big data,” that cynicism isn’t shared by most people who actually work with data. Data has undoubtedly been overhyped and oversold, but the best way to arm yourself against the hype machine is to start working with data yourself, to find out what you can and can’t learn. And there’s no shortage of data around. Everything we do leaves a cloud of data behind it: Twitter, Facebook, Google+ — to say nothing of the thousands of other social sites out there, such as Pinterest, Yelp, Foursquare, you name it. Google is doing a great job of mining your data for value. Why shouldn’t you?

There are few better ways to learn about mining social data than by starting with Twitter; Twitter is really a ready-made laboratory for the new data scientist. And this book is without a doubt the best and most thorough approach to mining Twitter data out there. END_OF_DOCUMENT_TOKEN_TO_BE_REPLACED

Strata Week: Intel wants you to reap the benefits from your personal data

Intel's Data Economy Initiative, your personal records are exposed, Sears gets into the data center business, and ODI wants Git for data publishing.

Intel’s taking the lead in the new “data economy”

Intel is looking to take the lead in what it has dubbed the “data economy,” helping consumers and individuals realize and retain more value from their personal data. Antonio Regalado and Jessica Leber report at MIT Technology Review that the the world’s largest computer chip maker has launched a “Data Economy Initiative.” Ken Anderson, a cultural anthropologist who is in charge of the project, described the initiative to them as “a multiyear study whose goal is to explore new uses of technology that might let people benefit more directly, and in new ways, from their own data.”

As part of the initiative, Intel is funding hackathons to encourage developers to experiment with personal data in new ways, Regalado and Leber note. “[Intel] has also paid for a rebellious-sounding website called We the Data,” they report, “featuring raised fists and stories comparing Facebook to Exxon Mobil.” END_OF_DOCUMENT_TOKEN_TO_BE_REPLACED

In the following interview, Professor Shadbolt and I discuss what lies ahead. His responses were lightly edited for content and clarity.
END_OF_DOCUMENT_TOKEN_TO_BE_REPLACED

From sensor journalism to lean government to preemptive health care, 2013 will be interesting.

2012 was a remarkable year for technology, government and society. In my 2012 year in review, I looked back at 10 trends that mattered. Below, I look ahead to the big ideas and technologies that will change the world, again. END_OF_DOCUMENT_TOKEN_TO_BE_REPLACED

Should the Freedom of Information Act extend to data in private companies?

The Freedom of Information Act (FOIA), which gives the people and press the right to access information from government, is one of the pillars of open government in the modern age. In the United States, FOIA is relatively new — it was originally enacted on July 4, 1966. As other countries around the world enshrine the principle into their legal systems, new questions about FOIA are arising, particularly when private industry takes on services that previously were delivered by government.

In that context, one of the federal open government initiatives worth watching in 2012 is ‘smart disclosure,’ the targeted release of information about citizens or about services they consume by government and by private industry. Smart disclosure is notable because there’s some “there there.” It’s not just a matter of it being one of the “flagship open government initiatives” under the U.S. National Plan for open government or that a White House Smart Disclosure Summit in March featured a standing room only audience at the National Archives. When compared to other initiatives, there has been relatively strong uptake of data from government and the private sector and its use in the consumer finance sector. Citizens can download their bank records and use them to make different decisions.

Earlier this summer, I interviewed Representative Darrell Issa (R-CA) about a number of issues related to open government, including what he thought of “smart disclosure” initiatives.

END_OF_DOCUMENT_TOKEN_TO_BE_REPLACED

From smartphones and continuous data comes the social MRI

It’s clear at this point that the smartphone revolution has very little to do with the phone function in these devices. Rather, it’s the unique mix of sensors, always-on connectivity and mass consumer adoption that’s shaping business and culture.

Dr. Nadav Aharony (@nadavaha) tapped into this mix when he was working on a “social MRI” study in MIT’s Media Lab. Aharony, who recently joined us as part of our ongoing foo interview series, described his vision of the social MRI:

“If you think about it, the three things you take with you when you go out of your home are your keys, your wallet and your phone, so our phones are always with us. In aggregate, we can use the phones in many people’s pockets as a virtual imaging chamber. So, one aspect of the social MRI is this virtual imaging chamber that is collecting tens or hundreds of signals at the same time from members of the community.” [Discussed at 1:16]

Aharony’s work focused on 150 participants (about 75 families) that were given phones for 15 months. During that time, more than one million hours of “continuous sensing data” was gathered with the participants’ consent. The data was acquired and scrubbed under MIT’s ethics guidelines, and for extra measure, Aharony included his own data in the dataset.

Collecting the data was just the beginning. Parsing that information and creating experiments based on emerging signals is where the applications of a social MRI became significant.
END_OF_DOCUMENT_TOKEN_TO_BE_REPLACED

I'm trying to walk the line between obsessive tracking and an open ended approach to motivation.

What is smart disclosure?

Smart disclosure is when a company or government agency provides consumers with periodic access to personal data in an open format. Citizens can put their own data assets to work in making better choices about finance, healthcare, travel, energy, education, real estate and more.