Why local state is a fundamental primitive in stream processing

What do you get if you cross a distributed database with a stream processing system?

One of the concepts that has proven the hardest to explain to people when I talk about Samza is the idea of fault-tolerant local state for stream processing. I think people are so used to the idea of keeping all their data in remote databases that any departure from that seems unusual.

So, I wanted to give a little bit more motivation as to why we think local state is a fundamental primitive in stream processing.

What is state and why do you need it?

An easy way to understand state in stream processing is to think about the kinds of operations you might do in SQL. Imagine running SQL queries against a real-time stream of data. If your SQL query contains only filtering and single-row transformations (a simple select and where clause, say), then it is stateless. That is, you can process a single row at a time without needing to remember anything in between rows. However, if your query involves aggregating many rows (a group by) or joining together data from multiple streams, then it must maintain some state in between rows. If you are grouping data by some field and counting, then the state you maintain would be the counts that have accumulated so far in the window you are processing. If you are joining two streams, the state would be the rows in each stream waiting to find a match in the other stream.

END_OF_DOCUMENT_TOKEN_TO_BE_REPLACED

5 Fun Facts about HBase that you didn’t know

HBase has made inroads in companies across many industries and countries

With HBaseCon right around the corner, I wanted to take stock of one of the more popular1 components in the Hadoop ecosystem. Over the last few years, many more companies have come to rely on HBase to run key products and services. The conference will showcase a wide variety of such examples, and highlight some of the new features that HBase developers have added over the past year. In the meantime here are some things2 you may not have known about HBase:

Many companies have had HBase in production for 3+ years: Large technology companies including Trend Micro, EBay, Yahoo! and Facebook, and analytics companies RocketFuel and Flurry depend on HBase for many mission-critical services.

END_OF_DOCUMENT_TOKEN_TO_BE_REPLACED

Interactive query analysis for (Hadoop scale data) has recently attracted the attention of many companies and open source developers – some examples include Cloudera’s Impala, Shark, Pivotal’s HAWQ, Hadapt, CitusDB, Phoenix, Sqrrl, Redshift, and BigQuery. These solutions use distributed computing, and a combination of other techniques including data co-partitioning, caching (into main memory), runtime code generation, and columnar storage.

One approach that hasn’t been exploited as much is sampling. By this I mean employing samples to generate approximate answers, and speed up execution. Database researchers have written papers on approximate answers, but few working (downloadable) systems are actually built on this approach. 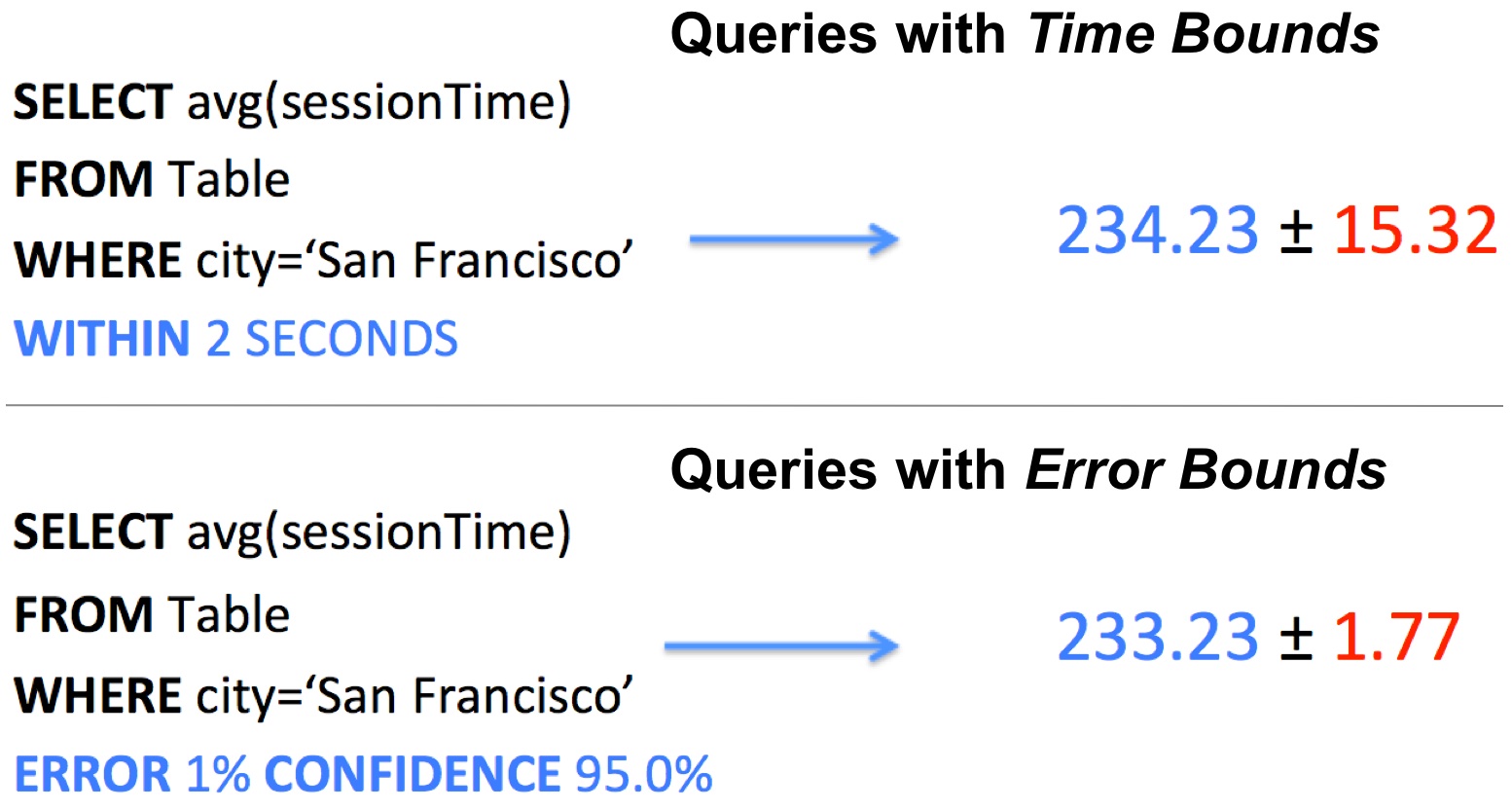 END_OF_DOCUMENT_TOKEN_TO_BE_REPLACED

Big Data and Advertising: In the trenches

Volume, variety, velocity, and a rare peek inside sponsored search advertising at Google

The $35B merger of Omnicom and Publicis put the convergence of Big Data and Advertising1 in the front pages of business publications. Adtech2 companies have long been at the forefront of many data technologies, strategies, and techniques. By now it’s well-known that many impressive large scale, realtime analytics systems in production, support3 advertising. A lot of effort has gone towards accurately predicting and measuring click-through rates, so at least for online advertising, data scientists and data engineers have gone a long way towards addressing4 the famous “but we don’t know which half” line.

The industry has its share of problems: privacy & creepiness come to mind, and like other technology sectors adtech has its share of “interesting” patent filings (see for example here, here, here). With so many companies dependent on online advertising, some have lamented the industry’s hold5 on data scientists. But online advertising does offer data scientists and data engineers lots of interesting technical problems to work on, many of which involve the deployment (and creation) of open source tools for massive amounts of data.

END_OF_DOCUMENT_TOKEN_TO_BE_REPLACED

Moving from Batch to Continuous Computing at Yahoo!

My favorite session at the recent Hadoop Summit was a keynote by Bruno Fernandez-Ruiz, Senior Fellow & VP Platforms at Yahoo! He gave a nice overview of their analytic and data processing stack, and shared some interesting factoids about the scale of their big data systems. Notably many of their production systems now run on MapReduce 2.0 (MRv2) or YARN – a resource manager that lets multiple frameworks share the same cluster.

Yahoo! was the first company to embrace Hadoop in a big way, and it remains a trendsetter within the Hadoop ecosystem. In the early days the company used Hadoop for large-scale batch processing (the key example being, computing their web index for search). More recently, many of its big data models require low latency alternatives to Hadoop MapReduce. In particular, Yahoo! leverages user and event data to power its targeting, personalization, and other “real-time” analytic systems. Continuous Computing is a term Yahoo! uses to refer to systems that perform computations over small batches of data (over short time windows), in between traditional batch computations that still use Hadoop MapReduce. The goal is to be able to quickly move from raw data, to information, to knowledge: 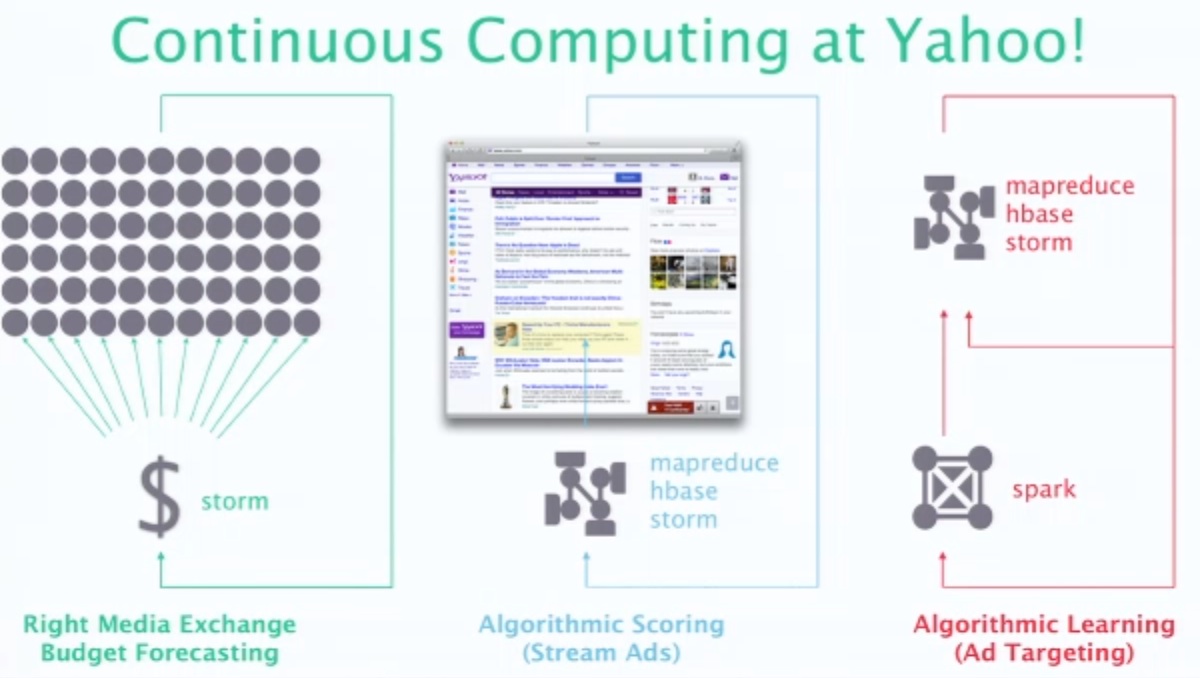 On a side note: many organizations are beginning to use cluster managers that let multiple frameworks share the same cluster. In particular I’m seeing many companies – notably Twitter – use Mesos1 (instead of YARN) to run similar services (Storm, Spark, Hadoop MapReduce, HBase) on the same cluster.

Going back to Bruno’s presentation, here are some interesting bits – current big data systems at Yahoo! by the numbers:

END_OF_DOCUMENT_TOKEN_TO_BE_REPLACED

AWS Redshift and BitYota launch, big data's problems could shift to real time, and NYPD may be crossing a line with cellphone records.

Amazon announced the beta launch of its Amazon Web Services data warehouse service Amazon Redshift this week. Paul Sawers at The Next Web reports that Amazon hopes to democratize data warehousing services, offering affordable options to make such services viable for small businesses while enticing large companies with cheaper alternatives. Depending on the service plan, customers can launch Redshift clusters scaling to more than a petabyte for less than $1,000 per terabyte per year.

So far, the service has drawn in some big players — Sawers notes that the initial private beta has more than 20 customers, including NASA/JPL, Netflix, and Flipboard.

Brian Proffitt at ReadWrite took an in-depth look at the service, noting its potential speed capabilities and the importance of its architecture. Proffitt writes that Redshift’s massively parallel processing (MPP) architecture “means that unlike Hadoop, where data just sits cheaply waiting to be batch processed, data stored in Redshift can be worked on fast — fast enough for even transactional work.”

Proffitt also notes that Redshift isn’t without its red flags, pointing out that a public cloud service not only raises issues of data security, but of the cost of data access — the bandwidth costs of transferring data back and forth. He also raises concerns that this service may play into Amazon’s typical business model of luring customers into its ecosystem bits at a time. Proffitt writes:

“If you have been keeping your data and applications local, shifting to Redshift could also mean shifting your applications to some other part of the AWS ecosystem as well, just to keep the latency times and bandwidth costs reasonable. In some ways, Redshift may be the AWS equivalent of putting the milk in the back of the grocery store.”

In related news, startup BitYota also launched a data warehousing service this week. Larry Dignan reports at ZDNet that BitYota is built on a cloud infrastructure and uses SQL technology, and that service plans will start at $1,500 per month for 500GB of data. As to competition with AWS Redshift, BitYota co-founder and CEO Dev Patel told Dignan that it’s a non-issue: “[Redshift is] not a competitor to us. Amazon is taking the traditional data warehouse and making it available. We focus on a SaaS approach where the hardware layer is abstracted away,” he said.