A bigger and different way of looking at the IoT

Tim O’Reilly’s Solid Conference keynote highlights the capabilities that will let us shape the physical world. 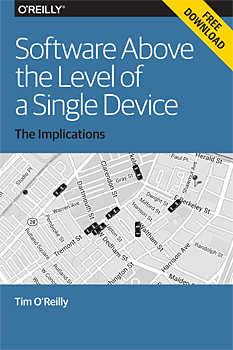 O’Reilly’s keynote address at the Solid Conference in 2014 explored the human-IoT link. The talk expanded the scope of the IoT, making it clear this isn’t just about individual devices and software — we’re creating “networks of intelligence” that will shape how people work and live.

The talk has become an essential resource for us as we’ve investigated the blurring of the physical and virtual worlds. That’s why we decided to put together a text-friendly version of the presentation that’s easy to scan and reference. And since we think it’s so useful, we’ve made the text version publicly available.

You can download your free copy of “Software Above the Level of a Single Device: The Implications” here. END_OF_DOCUMENT_TOKEN_TO_BE_REPLACED

A closer look at the forces causing demand

Buzzwords in the software industry arise and then die off with startling frequency. Ambiguous terms such as “growth hacker”, “sales engineer” and “rockstar developer” trip a developer’s spidey sense that the person saying them is just handwaving. However, occasionally a new term is created to articulate a programming skill set based on demand due to changes in the software development industry.

In 2013 the search term “full stack developer” took off on Google Trends and began appearing in numerous tech startup job postings. In this term’s case there are several real trends driving developers to invest in learning and identifying as full stack developers.

The usage of the full stack developer term is driven by several larger trends in software development. END_OF_DOCUMENT_TOKEN_TO_BE_REPLACED

Software and hardware are moving together, and the combined result is a new medium.

An updated version of this essay was published in December 2014.

Real and virtual are crashing together. On one side is hardware that acts like software: IP-addressable, controllable with JavaScript APIs, able to be stitched into loosely-coupled systems—the mashups of a new era. On the other is software that’s newly capable of dealing with the complex subtleties of the physical world—ingesting huge amounts of data, learning from it, and making decisions in real time.

The result is an entirely new medium that’s just beginning to emerge. We can see it in Ars Electronica Futurelab’s Spaxels, which use drones to render a three-dimensional pixel field; in Baxter, which layers emotive software onto an industrial robot so that anyone can operate it safely and efficiently; in OpenXC, which gives even hobbyist-level programmers access to the software in their cars; in SmartThings, which ties Web services to light switches.

Let Decisions Be Your Guide

Business analytics projects: Using decisions as a basis to prioritize and identify requirements

Most normal people don’t look at data sets just for fun. They study views of the data to make decisions about what to do, be it a decision to take some specific action or a decision to do nothing at all. The main purpose of business analytics projects is to develop systems that turn large and often highly complex data sets into meaningful information from which decisions can be made.

The decisions that people make using business analytics systems can be strategic, operational, or tactical. For example, an executive might look at his sales team’s global performance dashboard to decide who to promote (tactical), which products need different marketing strategies (operational), or which products to target by markets (strategic). Generally speaking, all software systems that include an analytics component should enable users to make decisions that improve organizational performance in some dimension.