Using ExpandoObject to create objects that you can add properties, methods, and events to. 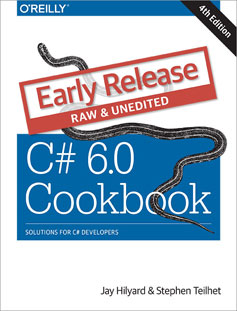 Buy the book in early release.

Buy “C# 6.0 Cookbook” in early release.
Editor’s note: This is an excerpt from “C# 6.0 Cookbook,” by Jay Hilyard and Stephen Teilhet. It offers more than 150 code recipes to common and not-so-common problems that C# programmers face every day. In it, you’ll find recipes on asynchronous methods, dynamic objects, enhanced error handling, the Rosyln compiler, and more.

You want to be able to build up an object to work with on the fly at runtime.

Use ExpandoObject to create an object that you can add properties, methods, and events to and be able to data bind to in a user interface.

We can use ExpandoObject to create an initial object to hold the Name and current Country of a person.

END_OF_DOCUMENT_TOKEN_TO_BE_REPLACED

The Once and Future SVG

Plugin-free vector graphics are now easier than ever before

Thirteen years ago, in 2001, the World Wide Web Consortium (W3C) finalized the specification for Scalable Vector Graphics, version 1.0. A few months later, in early 2002, O’Reilly published the original SVG Essentials, describing both the basics and the wonderful potential of SVG. An open standard for vector graphics, with support for scripting and animation, was an area of boundless possibility.

From some perspectives, not much has changed. The official SVG specification is still at version 1.1, which was released in 2003 and edited in 2011. Neither update introduced new features to SVG, instead focusing on improving clarity and consistency in the details.

In practice, however, SVG has changed considerably. There are numerous tools for creating SVG, both full-featured graphics programs and online widgets. Most importantly, nearly every web browser out there treats SVG as a first-class citizen (some outdated mobile and Internet Explorer versions being exceptions), displaying SVG as an interactive part of your document with no need for plug-ins.

END_OF_DOCUMENT_TOKEN_TO_BE_REPLACED

What every Java developer needs to know about Java 9

Java 8 may only have been released a few months ago, but Oracle has already announced the first set of features that will be targeted for Java 9. On August 11th, Mark Reinhold, a Chief Architect for Java, made available an initial feature set to subscribers on the jdk9-dev mailing list.

The crop of features are being run under a relatively new process, known as Java Enhancement Proposals (JEP). This process allows new language and VM features to be prototyped and explored without the full weight of the normal Java standardization process, although the expectation is that suitable, successful JEPs would go on to formal standardization. There will, of course, be many other new features that will be introduced in Java 9, but in this post we are going to focus on two major enhancements — and examine how they relate to features added in Java 7 and 8.

END_OF_DOCUMENT_TOKEN_TO_BE_REPLACED

The agile upside of XML

Anna von Veh and Mike McNamara on the benefits of XML and the tech-driven future of publishing.

The gravitational pull of information

Bob Boiko on why designers and programmers should converge around content.

Content creators, designers and programmers all speak slightly different languages. Bob Boiko believes that a focus on information — its structure and its delivery — can get everyone on the same page.

This short article outlines some ideas about an open source, online platform for making books, based on WordPress.

Some Tasty Bits from the StartWithXML UK Survey

We've got some raw results from the StartWithXML survey in the UK, and they are very different in some respects from the US survey we did. Some salient points:48.7% of the respondents were in the STM market, followed by trade (24.4%) and college (16%).The bulk of respondents were from large houses – 50.4% – and the rest were evenly divided…