In this segment, I’ll look at how publishers fared in the second quarter. The figure below shows the treemap for change in publisher performance in units sold versus the same period last year. 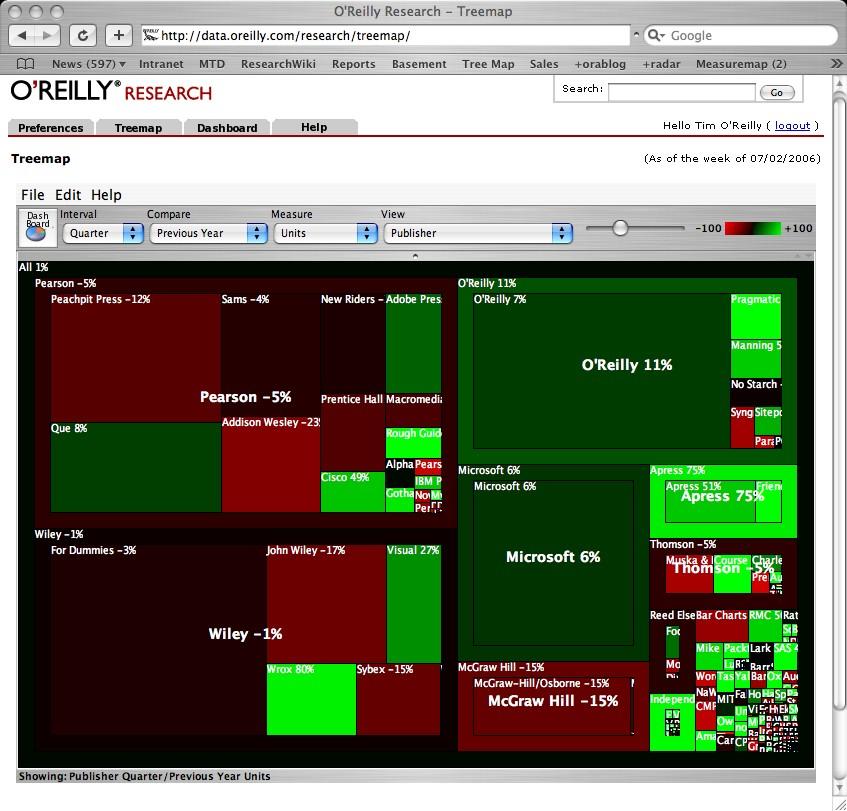 A few notes on how to read the figure: in this version of the treemap, I’ve moved the slider so that you can see the categorization structure, with the entire market as one enclosing box, within that boxes for major publishers and within that, the separate imprints that each owns or distributes. So, for example, you’ll see that Pearson, the largest computer book publisher, owns imprints such as Peachpit, Sams, Que, Addison-Wesley, Prentice-Hall, and many others. Wiley sells using the For Dummies, John Wiley, Visual, Wrox, and now Sybex brands. (They acquired Sybex late last year.) In the case of O’Reilly, the various “imprints” are actually independent publishers that are distributed to retailers by O’Reilly. The percentage growth shown for the overall company is the average of the growth for all of the imprints.

As you can see, the market as a whole grew about 1.5% (shown here as 1%). The top-performing publisher in terms of increased unit sales was Pearson’s Rough Guides imprint, up 1393%. (Rough Guides is a UK travel publisher owned by Pearson that’s had great success with their “travel guides” to the Internet and the iPod.) Thomson’s Course Technology imprint was up 613%, followed by the Pragmatic Programmers, with 315% growth and APress’ Friends of Ed imprint, up 288% (all from a very small base). Manning was up 52%, and Apress proper up 51%. Also very interesting was the resurgence of the Wrox brand, now owned by Wiley, up 80%. Among the “majors” (Pearson, Wiley, O’Reilly, Microsoft, and McGraw Hill), only O’Reilly and Microsoft outperformed the market, up 7% and 6% respectively. (Including its distribution clients, O’Reilly was up 11%, helped by the strength of Pragmatic and Manning.)

Perhaps more interesting than who is gaining, though, is who is losing ground. Pearson’s unit sales were 5% lower than the same quarter a year ago, and Wiley’s were down 1%, despite the growth of the Wrox brand and the acquisition of Sybex. This has led to a significant erosion of market share. Compare the 2nd quarter competitive “dashboard” from our Bookscan data mart below with the one that follows, from a year ago. (Click on any of the images to pop up a full-size window that is easier to read.) 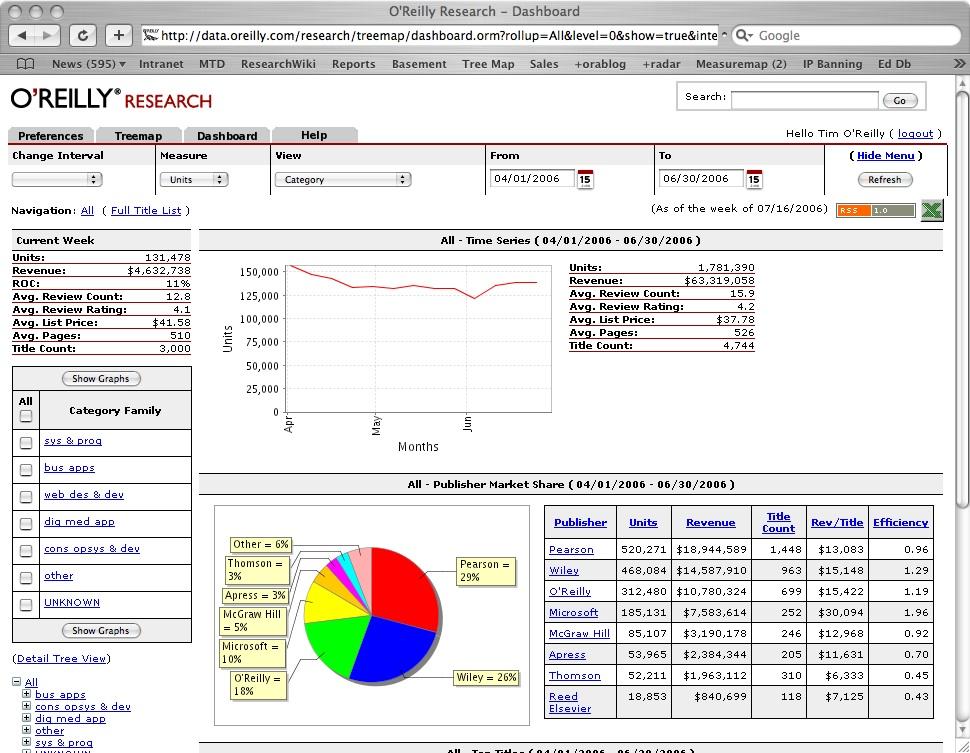 Three years ago, when we began capturing and analyzing this data, Pearson’s share was at 31%, Wiley’s at 28%, and O’Reilly at 13%.

While market share gains are one measure of publisher performance, perhaps a better measure is how many titles published it takes to get a comparable share of unit sales. This is a measure that we call title efficiency. This is the ratio of title share to unit market share. Think about it this way: if a publisher has 10% of the titles appearing in the Bookscan Top 3000, and gets a 10% share of units sold, they will have a ratio of 1:1, expressed as a title efficiency of 1.0. An efficiency of 1 is also the market average: 100% of the title count delivering 100% of the unit sales. A publisher that achieves its share with fewer titles will have a higher ratio.

Using this measure, you can see that Microsoft Press continues to outperform the market with their focused program, in which only 5% of the title count delivers 10% of unit market share. Wiley and O’Reilly are the only two other major publishers who outperform the market, with title efficiencies of 1.38 and 1.23 respectively. Pearson is slightly below the market average, with an efficiency of .97, while other publishers struggle mightily, publishing many more titles in order to achieve their respective shares. Apress has an efficiency of only .65, meaning that on average they need to publish 3x as many titles
as Microsoft Press or 2x as many as Wiley or O’Reilly to achieve a comparable share of sales.

Things get even more interesting when you look at smaller publishers and imprints, where a few bestsellers in a small list can make a publisher look really good. The table below shows title efficiency per imprint for many of the imprints likely to be most familiar to readers of this blog. Breaking from the quarter-by-quarter numbers, this table shows year-to-date figures as of this writing. In this table, imprints are ranked by total size. We’re pleased to see that O’Reilly trails only For Dummies, and is now the #2 imprint in terms of total units sold. Note however, that in terms of title efficiency, Dummies is far and away still tops in the market, outpacing even Microsoft Press when separated out from other lower-performing Wiley imprints.

It’s possible to do a similar exercise for revenue efficiency (which is especially important to publishers, retailers, and authors, because in the end, it is dollars that pay the bills, not units sold.) The ratios are not the same because, of course, publishers offer their wares at different prices. Here’s the analogous table for revenue efficiency:

While we’ve left publishers ranked in unit sales order for ease of comparison with the previous table, I was pleased to note that O’Reilly is actually the #1 imprint in terms of revenue. In revenue efficiency, you’ll see that Microsoft Press is even stronger than in units. The Pragmatic Programmers come in at the #2 spot, quite an astonishing performance given the fact that their average selling price is on the low end of the market. New Riders and Manning also show up very well, helped by relatively high prices on books that also sell well. Apress improves a little in the revenue view because of its high prices, but still trails other imprints with comparable reputation. I continue to speculate that this is because of the weak retail distribution of Springer-Verlag, Apress’ corporate parent. (I’d love to take on Apress as a distribution client! I’d bet we could increase their sales significantly.)