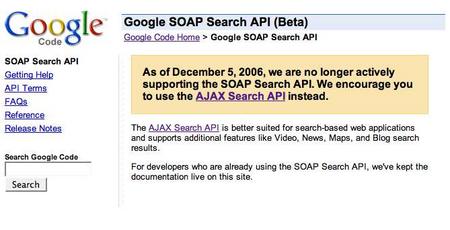 In an odd move Google has quietly deprecated their Search SOAP API, will no longer be issuing keys, and have removed the SDK from their site. They did not even issue a blog post about it. They will continue (for how long?) to support existing users, but will not do any bug fixes. They are urging developers to use their AJAX Search API ((Radar post) instead.

The AJAX Search API is great for web applications and users that want to bling their blog, but does not provide the flexibility of the SOAP API. I am surprised that it has not been replaced with a GData API instead. The developer community has been discussing this and do not seem happy with the change. Discussion on the forums have pointed out that Yahoo! has a REST Search API. Live Search also has a SOAP API available.

Not only will it be bad for Google developers, but it is bad for people trying to learn webservices. As web developer Paul Bausch wrote to us:

This is such a bad move because the Google API was *the* canonical example of how web services work. Not only is Google Hacks based on this API, but hundreds of other books and online examples use the Google API to show how to incorporate content from another site into a 3rd party application. There’s a bit of discussion about it here.

This was a unilateral move that is going to alienate at least some of the Google dev community and lead to defections to other services. The AJAX Search API is not a replacement for the SOAP API.

Update: On his blog, Nelson Minar, who wrote the original SOAP API while at Google, reflects on how this is an act of product discipline much like the recent shutdown of Google Answers (Radar post).

Update #2: Tim writes: On the other hand, SOAP has always been a political football shaped by big companies who were seeking to use it to turn web services back into a controllable software stack. (I remember the first web services summit we did, where a Microsoft developer who I won’t name admitted that SOAP was made so complex partly because “we want our tools to read it, not people.”) And it could be that innovation in web services is what we need. However, backwards compatibility is worth preserving, at least for a notice period so people can make an orderly transition. However, it sounds like they are doing that.

Update #4: Yahoo! has pointed out that their Search APIs continue to be open for business – in REST format no less.