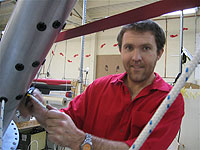 When I first met Saul Griffith in 2003, through a series of fortunate coincidences that brought him to our first Foo Camp, he said, “Our worlds don’t really overlap.” I represented the world of open source software and the web, the immaterial world of cyberspace; Saul, as he said in a 2004 interview for the Australian Broadcast Company, is “someone who keenly observes the world and then likes to tinker with it,” a scientist, an inventor, a worker in the world of stuff.

Of course, as readers of Make magazine recognize, those two worlds are on a collision course, with “smart stuff” — the infusion of computer-driven intelligence into objects and materials — being one of the most important trends in technology. Saul is one of the pioneers in this new world, and since we met him, he has been one of the people who’s done the most to shape our thinking about this coming revolution.

So it is with great pleasure that I share today’s announcement that Saul was selected as a MacArthur Fellow, a recipient of one of the Foundation’s so-called “genius grants.”

The term “genius” makes Saul very uncomfortable, but he certainly fills the bill, a scientist and engineering polymath feverishly spinning out more big ideas than even he can possibly ever bring to fruition. He’s also got enormous idealism. He’s passionate about teaching kids how to be scientists. He wants to build things that will change the world for the better.

One of Saul’s dear friends, Tim Anderson, has a better definition of Saul’s “genius.” In <a href=http://www.zeroprestige.organ account of some of their early experiments with new equipment for the young sport of kitesurfing, Tim wrote:

For a while it seemed like every kite excursion ended up with Saul in the emergency room…. Saul is the world’s greatest optimist, which makes him very accident-prone. He has quite a collection of scars and an almost complete set of x-rays from breaking most of the bones in his body over the years.

The image says a lot about Saul: the world’s greatest optimist, who is always getting in trouble…and then finding his way out of it, so that it’s easier on the next person.

And indeed there is a connection between incurable optimism and risk-taking, between deep scientific investigation of the physical world and extreme sports. (It’s only relatively recently that science became a matter only for the laboratory. If you think about the origins of science, you realize just how deeply it’s tied up with exploration and risk.) Saul plunges into the world with the expectation that everything, and I mean everything, is malleable, that he can solve any engineering problem, and he has a willingness to put everything on the line to prove it.

Saul’s Masters thesis at MIT was entitled Towards Personal Fabricators: Tabletop tools for micron and sub-micron scale functional rapid prototyping. [pdf] It took a “traditional” tools-based approach to the construction of new materials. But by four years later, he’d taken a different turn.
His PhD work at MIT was on self-assembling systems and the design of programmable materials. As described in the abstract of his paper that appeared in Nature:

Autonomously self-replicating machines have long caught the imagination, but have yet to acquire the sophistication of biological systems, which assemble structures from disordered building blocks. Here we describe the autonomous self-replication of a reconfigurable string of parts from randomly positioned input components. Such components, if suitably miniaturized and mass-produced, could constitute self-fabricating systems whose assembly is brought about by the parts themselves.

The full article can be found here [pdf]. If you want to go deeper, take a look at Saul’s PhD thesis, Growing Machines.
Saul also described some of his work in a talk he gave at the TED conference in 2005:

The key idea that Saul began exploring was one of changing the relationship between tools and materials. We tend to think of materials as shaped by tools, but that isn’t the only way to build things. Living things grow organically, with the instructions for their own construction somehow embedded in the materials themselves. What Saul showed was that even today we can construct primitive mechanical systems with the same characteristics. A set of parts with matching physical characteristics might randomly self-assemble into repeating strings, much like DNA, or fold into complex, predefined shapes, like proteins. Effectively, Saul was doing some of the groundbreaking work on programmable materials.

However, Saul’s insight about new ways to make things doesn’t just rely on new materials yet to be designed. A lens formed by the same physical laws that shape a waterdrop, a kite as an optimal energy surface for capturing the wind — these are objects and manufacturing processes that can be revisioned by a better understanding of the laws of physics. As Saul told Wired, Squid Labs, the company that Saul co-founded with some fellow MIT graduates, is “a design firm that does differential equations.”

Making the World a Better Place

Another of Saul’s projects at MIT was a prototype of a machine for creating lenses, based on the observation that water drops “self-assemble” perfect lenses, an invention for which he won the prestigious Lemelson student prize.
This low cost system for developing prescription eyeglasses for use in underdeveloped countries is a great example both of Saul’s problem-solving technique and his idealism. Saul had worked briefly with a group distributing donated eyeglasses in South America, and found this to be an entirely inadequate solution to a widespread problem.
These countries lack the infrastructure required for vision care — using today’s technology that means expensive diagnostic equipment as well as expensive molds for each lens type, and an inventory of lenses, leaving millions of people without corrective lenses.

Saul realized that programmable molding technologies could provide an entirely different solution to the problem, a device that could make custom lenses on the spot. (This would be an ideal technology to deploy as a microfinance business.) Not content to stop there, he realized that diagnosis was also a problem, and created a device to test vision using electronic sensors tracking the actual image produced in the wearer’s eye rather than testing by an optometrist.

Science and Engineering are Fun

Also while at MIT, Saul began developing Howtoons, along with fellow MIT student Joost Bonsen and cartoonist Nick Dragotta. Each howtoon tells a story about science, engineering, and the process of invention. But cleverly, the cartoon itself also tells how to build the project.

Howtoons, the book, will be published by Harper Childrens next month. Click on the image below for details.

Saul’s sense that science has to begin with child’s play goes back to his own upbringing. Born in 1974 to Ross Griffith, a professor of textile engineering at the University of New South Wales in Sydney, Australia, and Pamela Griffith, one of Australia’s leading artists, Saul grew up in a rich environment of observation and hands-on exploration.

In the Australian Broadcast Company interview linked above, he was asked how long he’s wanted to make things. He replied, “Since I was five or six, I guess, or probably younger. None of my Christmas presents ever made it past lunchtime without being taken apart.”

Saul’s column in Make issue 8 [pdf] was about hacking toys and games when he was a child. In it, he wrote:

Shooting my sister with a water pistol was fun,
but the most distinctly proud moment I recall was
a game I invented for myself when I was 8 that
entertained me for hours. With water pistol in hand
I’d shoot a squirt at the very top of a window. The
stream would dribble down the window, typically
dividing into two or three paths. I’d then shoot
the bead of water at the head of each path, which
would in turn create two or three more paths.

Quickly, exponentially, the number of paths would
increase and I’d be frantically shooting at a fractal
of water droplets, trying to score the most direct
hits before the first drop dribbled to the bottom of
the window. This was analog Asteroids, that fabulous
Atari video game, only higher resolution and
more compelling than its computer counterpart.
I can still feel the sense of achievement of having
invented a cool game that soon was played by my
other friends.

That story captures a lot about Saul: studying the world, playing actively with it, and then sharing what he knows. Those who know Saul and his family will also recognize Saul and his sister Selena as the prototypes for Howtoons protagonists Tucker and Celine.

Saul’s Howtoons birthday parties for the children of MIT professors are legendary. The kids would work together to build some cool device, like the air cannon used to blow out the candles on the cake in the video below. Then they get to play with it. (Saul still does frequent Howtoons workshops for kids at San Francisco’s Zeum, as well as at Maker Faire.) Unlike many brilliant scientists, Saul is also a gifted, charismatic communicator, both in writing and in person. He has already inspired countless others to follow in his footsteps.

Like most Australians, Saul continues to play as hard as he works. An Australian’s sport is as much a part of his identity as his occupation. Saul’s sport is kitesurfing, a sport he has helped to shape. When he began kiting in 1998, he quickly began remaking the equipment he used, experimenting at first, he says, mostly by taking away things that didn’t need to be there. He soon began building more sophisticated equipment, and helped his sister, an industrial designer in her own right, to launch a kitesurfing equipment company called MonkeyKites.

Serial Entrepreneur? How about Massively Parallel?

After graduating from MIT in 2004, Saul co-founded an inventors’ think tank called Squid Labs with fellow MIT Media Lab alums Eric Wilhelm, Colin Bulthaup, and Dan Goldwater. Squid’s “Smart Rope,” a rope that can detect and report its own breaking strain, was selected as one of Time Magazine’s Best Inventions of 2005. Smart rope also led to some whimsical demonstrations, including a giant tensegrity harp that the Squid team built for an exhibit at the Cooper-Hewitt Museum in New York. One amusing anecdote: one visitor from Thailand wrote to Saul asking for a copy of the harp to use in his elephant orchestra!