Dell’s Sputnik – Git what you want

In 1957, the former Soviet Union launched an unmanned satellite call Sputnik. That launch catalyzed a political, military, technological, and scientific race to superiority between the U.S.S.R. and the United States. More than fifty years later, Dell Inc. has launched its own “Sputnik.”

The centerpiece of the program is a Dell XPS-13 “ultrabook” that comes with Ubuntu 12.04 LTS installed. It has 3.6 GiB of Memory with Intel® Core™ i7-2637M CPU @ 1.70GHz × 4 Processor, 251.6 Gigabytes of disk space and a 64-bit OS. Like its namesake, Dell is hoping this project creates an ultrabook-race for developers’ computing needs. From my perspective, they are off to a great start.

First off, the Sputnik is noticeably faster than my MacBook Pro and my MacBook Air computers. For those of you using a Mac, when was the last time that you turned on your computer and, within 5-7 seconds, found it booted up and waiting for you to enter your password – and then, after you’d entered that correctly, found is instantaneously ready to use? I can answer that question for you: Never.

Also, when was the last time you held down your Delete key in a word processing app and saw the cursor move seemingly faster than your eyes could track? I think it was quicker to hit Delete and let the cursor do its work erasing paragraphs of data than to use a mouse and highlight an area and then hit delete. Most of us Mac users are conditioned to accept slow boot times, similar to the ’90s, when everyone was conditioned to hold “ctrl+alt+delete” and reboot on a Windows machine.

It is a sad statement that we let ourselves become conditioned and complacent with stupid computer foibles. Wouldn’t you rather turn on a device and start using it within seconds?

It is a little difficult to compare the XPS-13 to a MacBook Air because it has the computing power of the Pro, yet it’s the size of an Air. The only drawback is that the XPS screen resolution of 1366×768 is not on par with the MacBook Air’s 1440×900 or the Asus Prime laptop;s 1920×1200 resolution. I tether any of my computers to an external HDMI monitor, so I really don’t mind this resoluton mismatch. In fact, I find it hard to work with only one monitor these days. And for the times when I am not plugged into an external HDMI, the resolution is fine for the types of activities I need to get done. 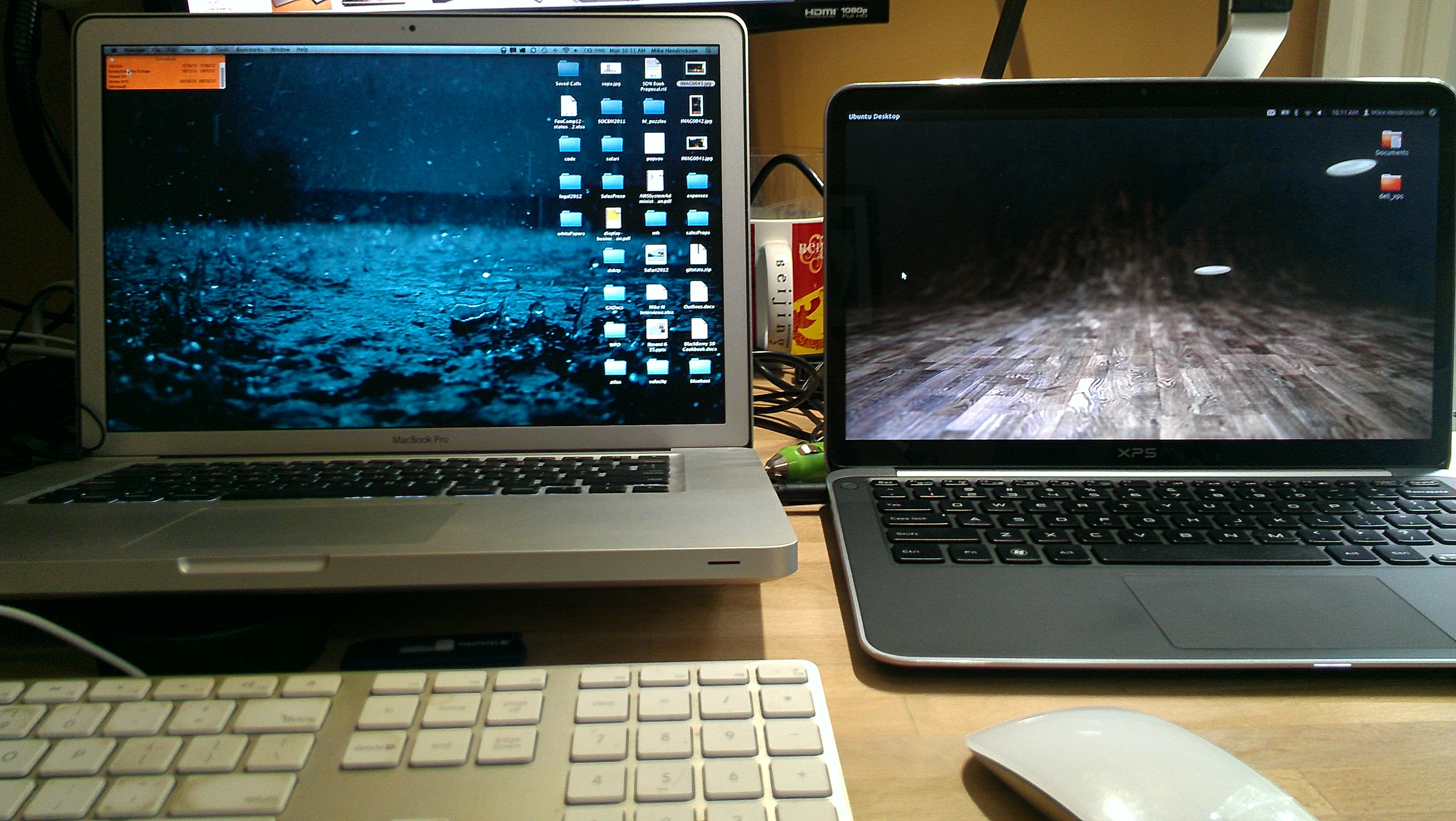 My journey begins from the middle

Before we go to far, you should know I’ve used a MacBook Pro or Air for the previous 8 years. Before that, I used PCs with Windows of some version. It’s been a more than 15 years since I’ve used Unix or Linux for any extended period.

Each time I move from one platform to another platform, I like to run multi-platform apps or find a suitable alternative and hack it to work for my purposes. Music, email, browser histories (bookmarks, etc.), calendars, photo management, etc.

Ubuntu 12.04 really surprised me, in terms of how easy it was to use out of the box. I can drop down into the command line when needed but Ubuntu 12, with new GUI improvements, makes this machine similar to a MacBook Air for someone who is tech-savvy, but much faster. I am still blown away with how fast this laptop is. With Cairo Dock, I have the familiar dock at the bottom of the screen. Oddly enough, this is nice because my learned behavior [conditioned] is to look at the bottom for my apps. This makes launching apps familiar and easy.

But since I always look for the middle in any platform, I typically end up with Thunderbird as an email app, Chrome and Firefox as my browsers, and some text editor that does not have Word in its name. And, of course, MySQL and a spreadsheet application for managing data and analysis. I’ll occasionally use PHP or Javascript to do small projects that interest me.

The journey to another side

I understand one of the goals for this program is to make a development environment that has software installed specifically targeted to different developer profiles. The idea is that if you are a Java developer, you get this XPS with minimal Ubuntu preloaded. When you unbox, it you’ll then run Git and download your Java profile, or maybe a particular sub-profile of a Java environment. That might be a Java Enterprise profile, the embedded Java profile, the Java gaming profile, etc. The great thing here is we could see community profiles that reflect the wisdom of many rather than one company saying what you need. Keep that profile concept in mind as you read on.

There is definitely more to a development platform than just software tools. Before I continue on to the profiles and what you can expect there, let’s take a look at using this as both your work environment and your personal machine. I, for one, integrate my work and private life. I know many of you reading do not either, but I believe there are plenty of you that do. I purchase music that I may want to listen to as I do some work. I also take both business photos and personal photos and find that it is easier to just have them mix than to take the time to compartmentalize every activity of my day.

Once I got over the incredible speed of the machine, great ergonomics and the terrific feeling keyboard, I spent some time exploring the computer to find out what came pre-installed and what I would need to add for my personal usage. In other words, I spent some time looking for all the things that I use a laptop for in both professional and personal modes, like a terminal window, text editors (vim/gedit), spreadsheet applications, and the right web browser (Chromium). If I was going to use this as a replacement for my Mac, I also needed to set up my personal apps (social, images, music, etc). Lately, I’ve been using Git a lot, because our new Atlas authoring platform uses Git for version tracking. This XPS had all these apps installed.

As I explored, what struck me was that, out of the box, Sputnik was not full of unnecessary bloatware apps. Some folks have said that Macs don’t come with bloatware either. To them, I’d ask: have you used Safari? To me, it is not in the same class as Firefox or Chrome — yet you have to keep it on your system or all hell breaks loose.

And while they may not be bloatware, per se, are Launchpad and Mission Control really necessary for me? I have never used them yet they are on my Mac’s Dock at install. Is PhotoBooth something I need to bring out my 8-year old silliness again?

Another app that drives me nuts is MobileMe sync. I cannot get rid of it from my tool bar and I am not going to pay Apple anything to store stuff in the cloud when Google gives me plenty of space for free. The XPS offers Ubuntu One cloud storage and you get oodles of space for free here, too. All that being said, one man’s bloatware is another man’s treasure. Let’s move on.

The concept of apps that are useful to one and not to another person leads me back to the profile idea. Wouldn’t it be nice to get just what you wanted from a software install? You chose the components when you purchase your machine and that is what it comes with. It would be awesome to also do this with mobile smartphones.

The potential of profiles

Dell is on the right track with their profile thinking. To me, this could be a game-changer in the computer manufacturer race. Dell’s project could disrupt an industry, shifting towards a new competition to deliver great hardware with custom profiles delivered as your software stack. The new race would be to build machines that developers want to use because they are the best, fastest and are tailored specifically to their needs.

Again, since no two developers are alike, the install image is pretty basic and minimal. Sputnik’s unique strength is that it will connect to a Git repository and pull down the developer profile/s you specify.

The first profiles Dell is targeting are Android, Ruby and JavaScript. I could see a whole host of celebrity profiles, business profiles, hacker profiles, open source profiles and hybrid profiles developing. I’d love to see a SMB profile that would enable a small business creator/owner to get a base machine, and then load on all the components of an open source stack that allows them to spin up their business with minimal effort and cost. Basically, that might include an install of WordPress, an email manager, a spreadsheet app for tracking invoices and expenses, and probably a word processor for correspondence. Next would be a “Scaling” profile, where you are growing your SMB from $5 million to $50 million in annual revenues. Once you have moved past the scaling profile, you’d likely to need a “DevOps profile” so you can manage the growth, size, scale, and operations of a large business.

It’s better to Git than receive?

To me, the idea of delivering a bare bones hardware device with the notion of layering software profiles on top of the machine has the potential effect of the original Sputnik launch. It will ignite a technology race in the ultrabook space.

Hopefully, it will inspire an industry to look closely at what their consumers want on purchased hardware, rather than giving them what the manufacturer thinks they need or want. I hope the mobile device makers are also listening, including the carriers that plop their bloatware on our devices. It would be nice to git what you want, rather than get what you receive.