Big data and mobile are changing retail. NFC? Not so much.

Here are a few stories from the commerce space that caught my attention this week:

Gary Hawkins at the Harvard Business Review took a look this week at marketing and research in the commerce space and argued that the costs associated with big data advantages may be wiping out the little guy. Hawkins writes:

“In this war for customers, the ammunition is data — and lots of it. It began with transaction data and shopper data, which remain central. Now, however, they are being augmented by demographic data, in-store video monitoring, mobile-based location data from inside and outside the store, real-time social media feeds, third-party data appends, weather, and more. Retail has entered the era of Big Data.”

Hawkins points out that this level of consumer intelligence is highly advantageous and even more expensive, thus only retailers with adequate resources (read: deep, deep pockets) can compete. Citing a study (PDF) by the Grocery Manufacturers Association, he notes that “annual industry spending on shopper marketing at over $50 billion, and growing.”

In addition to sidelining smaller retailers, the shopper marketing trend is having a more pervasive effect on the industry as a whole by changing the distribution of budgeted marketing expenditures. “Trade promotion accounted for 44% of total marketing expenditures by manufacturers in 2011, lower than any other year in the past decade,” Hawkins notes. The reason for the shift is all about the ROI — quoting Matthew Boyle of CNN Money, Hawkins writes that “the partnership of Kroger and dunnhumby ‘is generating millions in revenue by selling Kroger’s shopper data to consumer goods giants’ … It is widely understood that Kroger is realizing over $100 million annually in incremental revenue from these efforts.”

This model not only caters to large retailers over smaller retailers because of the size of their wallets, but because it’s easier for brands to interact with the corporate headquarters of a major retailer with 1,000 stores than to interact with 1,000 owners of independent stores, Hawkins writes. He goes into detail about how this business model will affect the industry on several fronts — you can read his piece in its entirety here.

NFC, a mess waiting to happen?

When Apple unveiled the iPhone 5 last week, the big news on the commerce front was the new device’s lack of NFC technology. After some time to mull it over, most are coming to the conclusion that it won’t be detrimental to Apple — or to mobile payments, for that matter. Brian Proffitt at ReadWriteWeb addressed the issue this week and argues that Apple will be just fine without NFC — you can’t really use it anyway, as NFC payments aren’t universally accepted. And with the expense and hassle on the part of the merchant in setting up for NFC payments, this form of payment is going to have to become far more ubiquitous to make it worth their while. Proffitt writes:

“NFC may afford some convenience to some customers, but if it doesn’t increase sales in a meaningful way it’s going to drop to a lower point on a business’ priority list. Getting more sales and customers is the big win, and NFC might not help with that when something like Passbook or other payment systems like Square could be implemented with less cost and hassle.”

Over at All Things Digital, Carey Kolaja, chief of operations for global product & experience at PayPal, took a look at this issue as well. She argues that NFC is a mess waiting to happen and asks why Apple would want any part of it anyway. Kolaja writes:

“No retailer will have multiple NFC boxes to take payments from different networks, and the NFC terminals shipping today do little more than just transmit the card number and transaction size. They’re not equipped to automatically accept the complex coupons and offers that make the digital wallet so exciting. On the technology side, carriers are trying one solution, phone manufacturers another, and technology companies yet another. Meanwhile, the consumer is standing at the register thinking ‘really, how hard is it to pull out my credit card?'”

Kolaja also defines “mobile wallet” and “digital wallet,” and explains why the terms are not interchangeable. She argues that, in the end, digital wallets will prevail over mobile wallets because “[r]elevance to the consumer will be king, and the ability to act in a seamless and secure environment across any device or platform will be what matters most to that consumer.” Her piece is well worth the read.

A new report released this week from MasterCard and the Economist Intelligence Unit showed that consumers are effecting change and innovation in the retail industry more than ever before. The report refers to this shift as “the era of the ‘I-Con’ — the smart, omnichannel, omnipotent consumer.” A couple highlights from the findings include:

Additionally, the study looked forward to 2020 and offered a few predictions. One notable highlight focused on mobile:

The findings echo study results from BigCommerce this summer that showed the exponential growth of e-commerce and m-commerce. The study results, visualized in an infographic, in part addressed the changing behavior of consumers and how mobile is driving those changes: 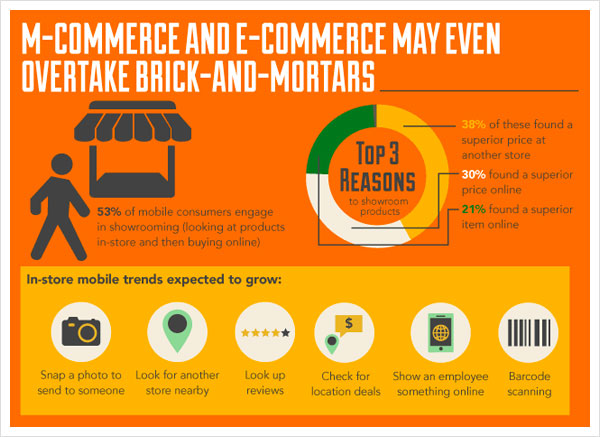