I used to read two print newspapers every morning. Now, I get most of my news online, but I still treasure my Sunday New York Times in print. This week, due to travel, I didn’t get a chance to catch up with it till a plane flight on Friday. The news was dated, and I’d seen some of it online, but there was still so much of interest that I would otherwise have missed. The Sunday Times is a gathering of fascinating minds reflecting on the issues of the moment; it’s a conversation well worth being a part of.

Normally, you see a flood of tweets from me on Sunday as I share my favorite articles. This week, on a plane without wifi and nearly a week late, I still have the impulse to share, but this time, I’m going to gang up the list of my favorite articles into a single post.

Here are some of the things from last week’s Sunday Times that I think you too might enjoy reading. (Note that the titles online don’t necessarily match the titles from the print edition, which I use below.)

The Joy of Old Age. This is a lovely reflection by neurologist and author Oliver Sacks on life as he looks toward his eightieth birthday. The last paragraphs are particularly moving. I’m 59, not 79, but even now I can see many of the changes – both positive and negative – that Sacks talks about so eloquently.

A Hidden Consensus on Health Care. Ross Douthat makes the case that there are two types of consensus on health care reform – the political consensus, which resulted in Obamacare’s preservation of the broken system of employer-provided healthcare, and the policy consensus, that “the status quo is actually the problem.” While I think there is a lot to like in Obamacare, I totally agree that we could do way better if we scrapped the current system in favor of more profound change. Too bad politicians are so lacking in courage, and have such a hard time actually enacting sensible policies! But what I found most useful in this article is the very notion of the “political consensus” vs. the “policy consensus” as a way to understand what is most broken about Washington.

35 Big Steps to Accountability. I have a big interest in reforming corporate governance. There is a myth that public corporations are managed for the benefit of their shareholders; the reality is that they are most often managed for the benefit of insiders. I wasn’t aware of the Harvard Law School’s Shareholder Rights project, which is tacking this issue. One of their projects, as Gretchen Morgenstern explains, is to get rid of staggered board elections, which tend to insulate companies from shareholder-driven accountability.

In Cargo Delivery, The Three-Wheelers That Could. Claire Martin takes us into the world of Portland’s electric bicycle-powered delivery vans. This is an idea (and a business) worth spreading to other cities. We need fresh approaches to making our world more livable.

Has ‘Caucasian’ Lost Its Meaning?  I had no idea where the term “Caucasian” came from. It’s bizarre origin will quickly convince you that this euphemism for “white” exists to make racism a little less obvious. The article is thought provoking – the kind of piece that stretches your mind in the way that physical exercises can stretch and strengthen your body. And it’s accompanied by a fascinating photo montage showing the many different shades of “white” skin.

Why I Donated My Stool. We’re increasingly understanding the role of the microbiome (the ecology of the bacteria in our gut, on our skin, and in other parts of our body) in human health, leading to powerful treatments that once would have seemed utterly beyond the pale. Apart from the pioneering researchers who first proposed the idea as early as 1958, who would have thought a decade ago that transplanting material (yes, that material!) from the bowels of one individual to another could cure seemingly intractable diseases?

Letting Go of Our Nukes.  The case for the US to unilaterally reduce the number of nuclear weapons in our arsenal. It makes a lot of sense to me. As they used to say, “How many times do we have to make the rubble bounce?”

Austerity Won’t Work if the Roof is Leaking. Robert Frank makes a powerful case for investing in infrastructure, pointing out that Germany, the champion of austerity, is driving down its unemployment rate by making massive investment in repairing and upgrading its infrastructure. As for the US, “No one in Congress seriously proposes that we just abandon our crumbling roads and bridges, and everyone agrees that the repair cost will grow sharply the longer we wait.” So why aren’t we doing anything? (See note above about the difference between policy consensus and political consensus.) I found the arguments for acting now, while the economy isn’t at full capacity, to be particularly compelling. Costs will be lower, in addition to the stimulus effect.

Ireland, North by North-Westeros. Lovely photographs of sites from Northern Ireland used in Game of Thrones, and an account of how to find them (as well as many other sites in Northern Ireland.) I love Ireland, and encourage all of you to visit, both the North and the South. (My own family is from Killarney, and it too has been the evocative, romantic backdrop for many an movie scene.)

Hans Hass, 94, Early Explorer of the World Beneath the Sea. A great reminder of why it’s good to read the Obituaries section (and a perfect bookend to the Oliver Sacks piece.) I had never heard of Hans Hasse and his wife Lotte, who pioneered undersea photography and published books and films of the undersea world a few years before Jacques Cousteau appeared on the scene. He made a lovely comment when asked if he was bitter about Cousteau’s greater renown: “No, why should I be bitter? The sea is so big.” (Though Hass couldn’t help remarking on Cousteau’s self-promotion and lack of recognition for others in the field.) 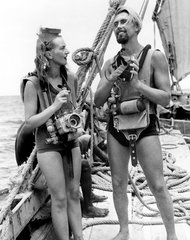 I particularly loved the photo of Hans and Lotte in scuba gear on the deck of a boat. The picture could have been shot this year, instead of the 50 or 60 years ago it must have been taken. There’s something about portraits that offer a unique window through time, showing us other lives so like our own but so unreachable. (This is why portraits, from Fayum sarcophagi and Roman busts through European masterworks of painting, through photography (Alfred Steiglitz’s portraits of Georgia O’Keefe!), are my favorite type of art. My gosh, we can look into the eyes of people from centuries, even millennia ago, share in their humanity, imagine their lives, so different yet with so many common threads!)

While Twitter and Facebook and Google+ can also introduce you to unexpected ideas and accounts of other lives, there is something special about the curation of a great newspaper, the very constraint that assembles such dissimilar content into a single frame.