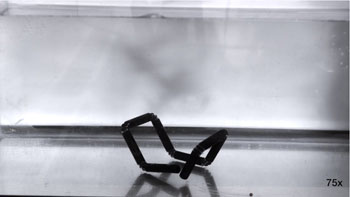 Stratasys’ Education, R&D departments and MIT’s Self-Assembly Lab are researching 4D printing — manufacturing one-off objects that can change their shapes or other physical characteristics in response to their environment. (View the video.)

Jeremy Rifkin is always predicting an avalanche of change: substitutes for human labor in The End of Work, pervasive genetic engineering in Algeny, and so on. Several interlocking themes run through his latest book, The Zero Marginal Cost Society. Behind everything lies the renewed importance of local resources: local energy production, local manufacturing, local governance. And the Internet that ties us all together (evolving into the Internet of Things) will, ironically, bolster local power.


To explain this apparently contradictory evolution, let me summarize the main trends Rifkin covers in this book. He combines a number of themes that appear often on Radar — and in his usual head-spinning style, predicts how they will totally change humanity:

Oh, and just to throw in a few other little things: humans everywhere will gain control over their lives through online education, a collaborative ethos that nearly replaces capitalism, and a sense of empathy that expands to include all peoples and perhaps the entire biosphere.

Let’s have a trailer-length look at each of these feature-film topics.

Rifkin expects a transition to solar, wind, geothermal, and other renewables to take place much faster than it seems to be happening right now. Part of the drive for the switch is, of course, climate change, along with the other ecological downsides of fossil fuel use. But the cost savings are even more motivating.

After installation, maintenance costs for renewable energy sources are tiny — so small, in fact, that after a while they approach what economists call zero marginal cost, hence the title of the book.

The relation between the homestead, the community, and the larger society becomes complex with renewable energies. In many places, residents might be able to power everything they need for daily living just from what they put on their homes. More flexibility might apply at the community level, where a wind farm could supply a large geographic area. And sometimes it might make sense to ship energy long distances as we do now, and let people trade their excess production — making a smart grid important.

Already the 3D and emerging 4D movements are producing two important lessons in the new balance between local and global. First, tinkerers can share empowering innovations with everyone in the world, whether it’s as supportive as a wheelchair or as dangerous as a gun. Second, recipients of the designs can adapt them to local needs.

Thus, if someone can locally obtain a much cheaper material, or finds the design ill-suited to local heat and cold conditions or rough ground, they can play around with a design and then share the changes with other people under similar conditions. Whereas traditional trade eliminated local entrepreneurship — bringing in mass-produced goods that displaced domestic production — the 3D/4D printing revolution will boost local entrepreneurship.

Rifkin also suggests that old junk can be recycled and turned into new wares. This lowers the cost of rapid prototyping, which I believe Rifkin failed to mention. When one can try out and throw away material products almost as fast as you can recompile and test software, you get a whole new approach to innovation and a dizzying pace of new products. 3D and 4D printing also allows prototypes to be quickly and widely distributed for testing, also speeding up development. Such new practices should help developing regions create tools and materials appropriate for their climates and cultures.

MOOCs, which take up Chapter 7 of Rifkin’s book, illustrate the mutual benefits of local and global activity. Many professors have found that students who meet in small, local groups — with peers, with teaching aids, or with professors — in between viewing MOOC offerings do better than those who take MOOCs in isolation.

The continuing role of big

Rifkin sees a future of loosely collaborating communities that eschew payment and intellectual property in favor of altruistic knowledge sharing. He claims that capitalism itself will shrink to become a bit player in the new economy. Many of these ideas will be familiar to Radar readers, perhaps through the works of Yochai Benkler (whom Rifkin cites several times), Clay Shirky (whom Rifkin doesn’t refer to), and Aaron Swartz (who is inexplicably missing from the book — perhaps because he was not well-known outside the computer field until his tragic death last year).

I see much better prospects for the continuation of capitalism. After all, who will grow and transport our food? It can’t all be grown locally in large cities, particularly in cold climates. Who will produce the computer chips, optical fiber, and plastic upon which the Collaborative Commons and 3D printing depend? And who will maintain the international communications cables across which we will all send our open designs? Although Rifkin doesn’t investigate these topics, he admits that large, centralized institutions will continue to play a role in the new paradigm.

Finally, I have a tremendous appreciation for human entrepreneurship (as does Rifkin, an admission that comes to full fruit in the book’s afterword). So long as some medium of exchange (that is, money) needs to exist, people will find unique goods and services that appeal to buyers. Like all the other changes to come, this will be enabled by the Internet commons and will have strong local components.