How NoSQL databases scale vertically and horizontally, and what you should consider when building a DB cluster.

Editor’s note: this post is a follow-up to a recent webcast, “Getting the Most Out of Your NoSQL DB,” by the post author, Alex Bordei.

As product manager for Bigstep’s Full Metal Cloud, I work with a lot of amazing technologies. Most of my work actually involves pushing applications to their limits. My mission is simple: make sure we get the highest performance possible out of each setup we test, then use that knowledge to constantly improve our services.

Here are some of the things I’ve learned along the way about how NoSQL databases scale vertically and horizontally, and what things you should consider when building a DB cluster. Some of these findings can be applied to RDBMS as well, so read on even if you’re still a devoted SQL fan. You might just get up to 60% more performance out of that database soon enough. 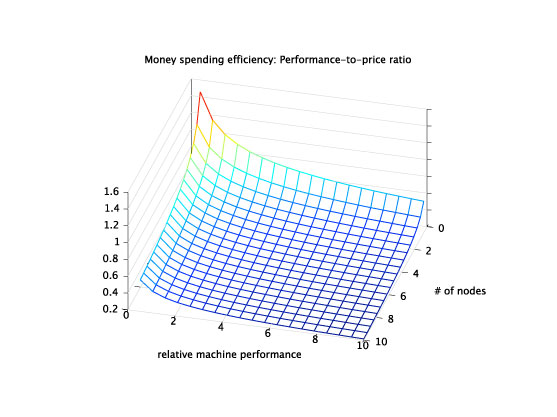 Identifying optimal expense as a function of horizontal and vertical scaling.

As you might have noticed, most of these findings could be summarized as “Don’t trust assumptions — just test, test, test!” We are all busy, and it’s easy to brush off live testing in favor of online research or documentation review. The truth is, though, that every setup is different, and until you get your hands dirty, it will be very hard to predict the actual throughput you’ll get from a system.

Also, don’t forget that no matter how fast and scalable the software, the quality of each and every component in your underlying hardware matters. You might invest in expensive SSD drives and then find your drive controller doesn’t have enough bandwidth to utilize that performance. You might be ready to increase your expense by 30% to get more compute power when you might just need to tweak the BIOS settings on your machines.

Try to view testing projects as an investment that will save you time in the long run, always challenge safe assumptions, and share what you learn with the rest of us whenever possible.

Cropped image on article and category pages by John Lester on Flickr, used under a Creative Commons license.