Everyone wants an alternative to email, but do we really need one?

Editor’s note: this post originally appeared on Medium; it is republished here with permission.

Conventional workplace wisdom declares email a daily scourge. We receive too much of it. We spend too much time replying to it. We concoct elaborate strategies to cope with it and avoid incurring a debt that downward-spirals to email bankruptcy.

We bow down at the altar of Inbox Zero, the methodology that dictates we take prompt, concrete action to dispatch with every single message we receive. Reply to it. Or file it. Or delete it. We turn the drudgery of processing the flood of correspondence into a game. Inbox Zero, FTW! Achievement unlocked … till the next time we hit refresh. Because emails are like gray hairs: for every one we send packing, five more will soon arrive in its place. Any client-side strategy we take to conquer our inboxes is thus limited by the fact that it’s palliative, not ameliorative. Perpetuating Inbox Zero means living in a constant state of vigilance, aggressively and swiftly responding to every incoming message. It means becoming an email answering machine!

Things weren’t supposed to turn out this way. Despite the efficiency and convenience afforded in terms of near-instantaneous delivery, email was initially sold to us as a method for more formal, deliberate correspondence — the modern-day electronic substitute for the physical letter, which both aptly and ironically was originally mass-marketed in America via millions of physically shipped CD-ROMs and a retro-folksy catchphrase. Receiving an email from a friend or a family member or a colleague was at that time an event of import, and that’s a key reason why we all bought in.

What’s happened, however, in the transition from the age of “You’ve Got Mail” to the era of Inbox Zero is that our perception of and relationship to email has dramatically changed. As Douglas Rushkoff puts it in his book Present Shock, the advent of ubiquitous Internet access via WiFi and cellular data networks has fostered a why-haven’t-you-answered-me-yet?!? culture that’s co-opted a “potentially empowering asynchronous technology” and recast it as a “falsely synchronous one,” where we must scramble to keep up with the imperative laid down by the bold subject lines infiltrating our screens.

“Slack” to the future

OK, our business culture is clamoring for a more synchronicity friendly environment; what are viable alternatives to email? Instant messaging apps (AIM, Google Chat, Yahoo Messenger) have long been popular office tools for one-on-one, real-time conversation, yet what they’re largely missing (beyond some basic transcripting features) is the gestalt of the inbox: robust functionality around collating and organizing disparate strands of digital correspondence.

But there’s another longstanding model for digital synchronous communication that has been gaining traction in the tech sphere: the chatroom. Ironically, at the same time that IRC has been on the decline, “old-school” chat is having a renaissance in the workplace. Primarily adopted to facilitate interaction within distributed developer teams, tools such as Campfire (launched in 2006) and HipChat (launched in 2010) have further adapted the chat paradigm to suit the office, each adding some form of the following features geared toward task management and bolstering productivity:

Chatroom apps have been bubbling under the radar for quite some time, but they appear to be approaching a tipping point of cultural awareness this year with the release of Slack, which enters the category with two key advantages: ~$40 million in VC funding and insouciant-hipster branding.

Slack boldly promises that it’s the email killer we’ve been waiting for (“Internal email becomes unnecessary as desktop & mobile messaging, file sharing and notifications fold into one place.”), but the implication of its branding isn’t particularly subtle either: use Slack, and your virtual workspace will be so chill… 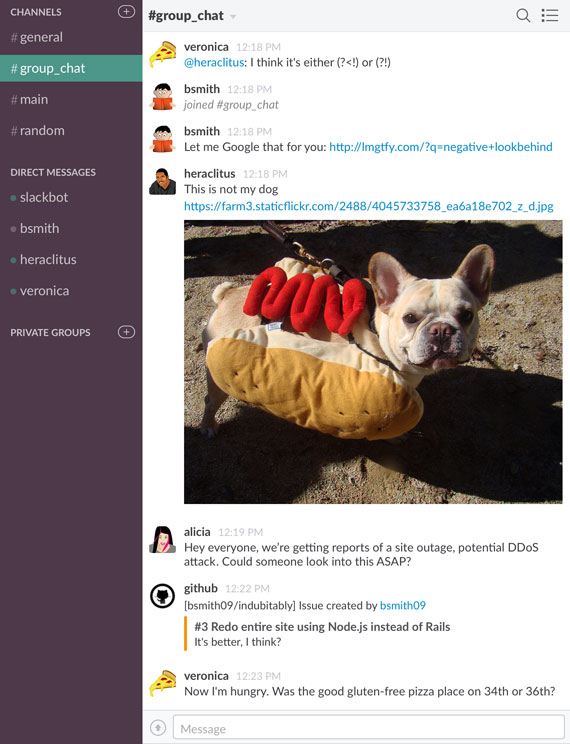 Send in the GIFs!

…Except maybe it’s not so chill? Lively, sure. Irreverent, perhaps. GIFtastic, indubitably. But chill perhaps is not the best choice of slang to capture the feeling of playing catch-up with a perpetual scroll of unthreaded messages from every single one of your team members. Take, for example, the tiny excerpt of #group_chat above, in which the Slack user must track three separate conversational threads involving four different people, a web server under siege, a robo-notification from GitHub, and a canine posing in a hotdog bun.

But we ♥ this sort of thing nowadays, right? It’s the premise behind social media: let’s go panning for some useful nuggets of information in a stream of frivolous stimuli.

Context matters, though. Work chat is not another “news” feed, not a diversion buried deep in the bowels of your browser tabs to which you spelunk when feeling bored or voyeuristic. Work chat is email in Twitter’s clothing, and the concomitant pressures and responsibilities of the inbox lurk just beneath its surface. Contribute to the conversation. Click on the Hackernews links. Add a GIF. Being a participant in chat is your job…

…Although it’s not really your job. It ain’t cool to do nothing but Slack all day. You’re being paid to <insert your job title in verb form here>, remember? So, only one eye on the GIFs, please, and keep the other one glued to <insert preferred example of official drudgery here>.

No mistake, like the best email clients, apps such as Campfire and Slack are beautifully conceived and executed pieces of software. The benefits they accrue to an organization in terms of adding transparency, archivability, and accountability to team decision making are real and potentially game changing. As are the productivity gains, e.g., of employing chatbots to automate routine tasks or assist with forecasts/projections.

That said, insofar as they guarantee a more innately desirable form of digital correspondence, an escape hatch from the tyrannies of the inbox, their promises are largely chimerical. If we abandon email as a result of the stress induced by leveraging asynchronous technology for synchronous purposes, then we need to acknowledge that we’re re-creating the same tension with “chat” by doing the opposite: treating synchronous technology asynchronously.

With most synchronous forms of communication — telephone calls, “hangouts”, or actual face-to-face conversations unmediated by circuit boards — the implicit, if not explicit, etiquette is that you are supposed to lend your undivided attention to the interaction. However, in a culture of Slack, where the chatroom stays “live” 24/7, no such presumption exists. Again, if you’re Slack-ing without multitasking, then you truly are slacking.

As such, ultimately, chat users find themselves in the same anomic, oxymoronic state as they did with email, a sort of asynchronous NOW, in which they’re totally empowered to respond to others at their leisure, as long as it’s within the next five minutes.

Since the primary bottleneck slowing down contemporary messaging services is the overhead of reading, dynamically formulating thoughts in response, and compiling them into written language, let’s outsource those capabilities to a server farm. We’ll build a cloud-based service that takes advantage of the latest advances in machine learning and natural language processing, à la QuickType, to analyze the full corpus of a user’s past digital correspondence (emails, IMs, SMSes), and adaptively suggest appropriate prefab replies to incoming messages that users can dispatch with a single flick of the finger — thinking optional.

Via “personless chat,” we can revolutionize workplace productivity by increasing our median communication throughput to 108 messages per hour, decreasing mean response latency to 27 seconds, while still leaving ample bandwidth for videoconferencing, Twitter, and 2048…

…Or, alternatively, maybe we could all just log off for a few hours and get some work done.

Image on article and category pages by PhotoAtelier on Flickr, used under a Creative Commons license.