Marie Beaugureau is an O'Reilly editor focused primarily on products related to data. She has more than 13 years of experience developing and project managing books, video, and other media. When she’s not reading about data, you’ll find Marie surfing and exploring the California coast.

Register for the free webcast, “Extending Cassandra with Doradus OLAP for High Performance Analytics,” which will be held July 29 at 9 a.m. PT.

Engineers at Dell were developing customer apps when they found that the query response times their customers were demanding — something on the order of seconds (in other words, the need to scan millions of objects/second) — required a new type of query engine. This led them on a four-year journey to create Doradus, one of Dell Software Group’s first open-source projects.

Doradus is a server framework that runs on top of Cassandra. To build Doradus, the team borrowed from several well-accepted paradigms. They used traditional OLAP techniques to allow data to be arranged into static, multidimensional cubes. They leveraged the vertical orientation and efficient compression of columnar databases. And, from the NoSQL world, they employed sharding. The result: a storage and query engine called Doradus OLAP that stores data up to 1M objects/second/node, providing nearly real-time data warehousing. This architecture also allows for extreme compression of the data, sometimes producing up to a 99% reduction in space usage.

This extremely dense storage means that data that once took multiple nodes can now be stored on a single node, allowing for fast queries without the expense of a large cluster. Because Doradus is built on top of Cassandra, the option to scale out is still there. This allows for sharding and replication, and also takes advantage of Cassandra’s failover features. END_OF_DOCUMENT_TOKEN_TO_BE_REPLACED

Topic modeling for the newbie

Get “Data Science from Scratch” at 50% off with code DATA50. Editor’s note: This is an excerpt from our recent book Data Science from Scratch, by Joel Grus. It provides a survey of topics from statistics and probability to databases, from machine learning to MapReduce, giving the reader a foundation for understanding, and examples and ideas for learning more. 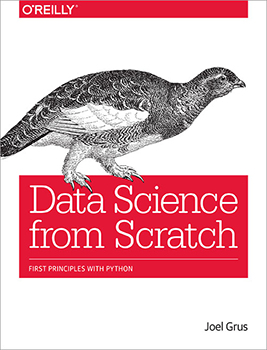 When we built our Data Scientists You Should Know recommender in Chapter 1, we simply looked for exact matches in people’s stated interests.

A more sophisticated approach to understanding our users’ interests might try to identify the topics that underlie those interests. A technique called Latent Dirichlet Analysis (LDA) is commonly used to identify common topics in a set of documents. We’ll apply it to documents that consist of each user’s interests.

LDA has some similarities to the Naive Bayes Classifier we built in Chapter 13, in that it assumes a probabilistic model for documents. We’ll gloss over the hairier mathematical details, but for our purposes the model assumes that:

From data privacy to real-world problem solving, O’Reilly’s data editors highlight the best of the best talks from 2014.

2014 was a year of tremendous growth in the field of data, as it was as well for Strata and Strata + Hadoop World, O’Reilly’s and Cloudera’s series of data conferences. At Strata, keynotes, individual sessions, and tracks like Hardcore Data Science, Hadoop and Beyond, Data-Driven Business Day, and Design & Interfaces, among others, explore the cutting-edge aspects of how to gather, store, wrangle, analyze, visualize, and make decisions with the vast amounts of data on our hands today. Looking back on the past year of Strata, the O’Reilly data editors chose our top keynotes from Strata Santa Clara, Strata Barcelona, and Strata + Hadoop World NYC.

It was tough to winnow the list down from an exceptional set of keynotes. Visit the O’Reilly YouTube channel for a larger set of 2014 keynotes, or Safari for videos of the keynotes and many of the conference sessions.

Best of the best