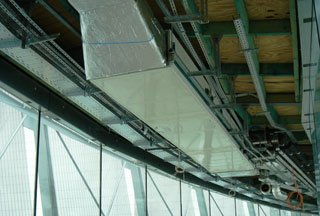 Let’s pull it all together to make a network selection for our building monitoring application. As described previously, the application will monitor, analyze, and optimize energy usage throughout the user’s properties. To accomplish this, monitoring and control points need to be deployed throughout each building, including occupancy and temperature sensors. Sensor data will be aggregated back to a central building automation panel located in each building. A continuous collection of data will provide a higher resolution of temperature and occupancy information, thus rendering better insight into HVAC performance and building utilization patterns. Comparison of energy utilization throughout the portfolio of properties allows lower performing buildings to be flagged.
END_OF_DOCUMENT_TOKEN_TO_BE_REPLACED

Today we are going to consider the attributes of wireless mesh networking, particularly in the context of our building monitoring and energy application.

A host of new mesh networking technologies came upon the scene in the mid-2000s through start-up ventures such as Millennial Net, Ember, Dust Networks, and others. The mesh network topology is ideally suited to provide broad area coverage for low-power, low-data rate applications found in application areas like industrial automation, home and commercial building automation, medical monitoring, and agriculture.

END_OF_DOCUMENT_TOKEN_TO_BE_REPLACED

The role of Wi-Fi in the Internet of Things

When to use a star network.

Today, Wi-Fi is by far the most commonly used wireless star topology. It is deployed widely throughout many environments, providing near ubiquitous internet access in facilities such as schools, campuses, office buildings, lodging, residential homes and so on. The term Wi-Fi is not a standard, but a term trademarked by The Wi-Fi Alliance and covering a number of IEEE 802.11 standards along with details of implementation.

As in past posts, let’s take a closer look at the technology and evaluate WI-Fi’s capabilities against the nine key application attributes that characterized our building monitoring and energy management application.

END_OF_DOCUMENT_TOKEN_TO_BE_REPLACED

For the last ten years I’ve had a foot in both the development and operations worlds. I stumbled into the world of IT operations as a result of having the most UNIX skills in the team shortly after starting at ThoughtWorks. I was fortunate enough to do so at a time when many of my ThoughtWorks colleagues and I where working on the ideas which were captured so well in Jez Humble and Dave Farley’s Continuous Delivery (Addison-Wesley).

During this time, our focus was on getting our application into production as quickly as possible. We were butting up against the limits of infrastructure automation and IaaS providers like Amazon were only in their earliest form.

Recently, I have spent time with operations teams who are most concerned with the longer-term challenges of looking after increasingly complex ecosystems of systems. Here the focus is on immediate feedback and knowing if they need to take action. At a certain scale, complex IT ecosystems can seem to exhibit emergent behavior, like an organism. The operations world has evolved a series of tools which allow these teams to see what’s happening *right now* so we can react, keep things running, and keep people happy.

At the same time, those of us who spend time thinking about how to quickly and effectively release our applications have become preoccupied with wanting to know if that software does what our customers want once it gets released. The Lean Startup movement has shown us the importance of putting our software in front of our customers, then working out how they actually use it so we can determine what to do next. In this world, I was struck by the shortcomings of the tools in this space. Commonly used web analytics tools, for example, might only help me understand tomorrow how my customers used my site today.

END_OF_DOCUMENT_TOKEN_TO_BE_REPLACED

Brace yourself: Address exhaustion is coming

IPv6 is the global warming of the computer industry, an impending disaster that most folks don’t seem to be taking as seriously as they should be. We’re well into the exhaustion phase of the IPv4 address space, but most ISPs are still dragging their heels on supplying the wider protocol to the end user.