As I try to do each quarter, here’s a report on the state of the
computer book market, as revealed by data from Nielsen Bookscan’s top
3,000 Computer Books report. (See my entry
Book Sales as a Technology Trend Indicator for a description
of our methodology.)

As you can see, the strong start to the year faded in the second half. In the first quarter, it really looked like we might be about to break out of the holding pattern we’ve seen for the past three years. The second quarter was a disappointment, but we had a brief resurgence in the third, which didn’t stick. While the year as a whole ended with a 2% increase over the previous year, most of that increase happened in the first quarter. A chart showing the percentage week-on-week and cumulative difference highlights the issue: 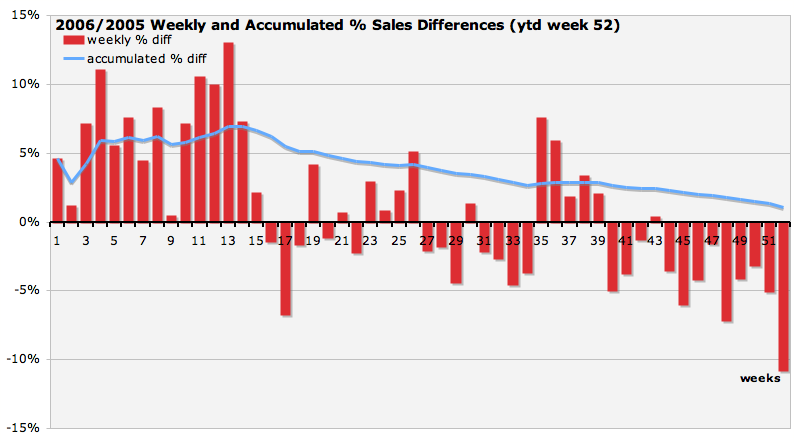 As you can see, the web development area continues to be strong, driven by the resurgence of opportunity in the web area that has come to be called Web 2.0. There’s also strength in Microsoft’s SQL Server, and in selected areas of programming, sysadmin, and software engineering. But three big market super-categories are a sea of red: consumer operating systems, where the market is holding its breath waiting for the upcoming release of Microsoft Vista (and a bit later, Mac OS X Leopard); office applications, ditto with Office 2007; and digital media, where the market is looking towards a new release of the Adobe product suites sometime next year. The strong showing for iPod books and consumer digital photography offerings was not enough to offset the slowdown in the core Photoshop book market.

A treemap showing the full year of 2006 versus the full year 2005 shows a somewhat brighter picture, with somewhat more green, but this optimistic picture is moderated by the fact that so many of the gains occurred early in the year. 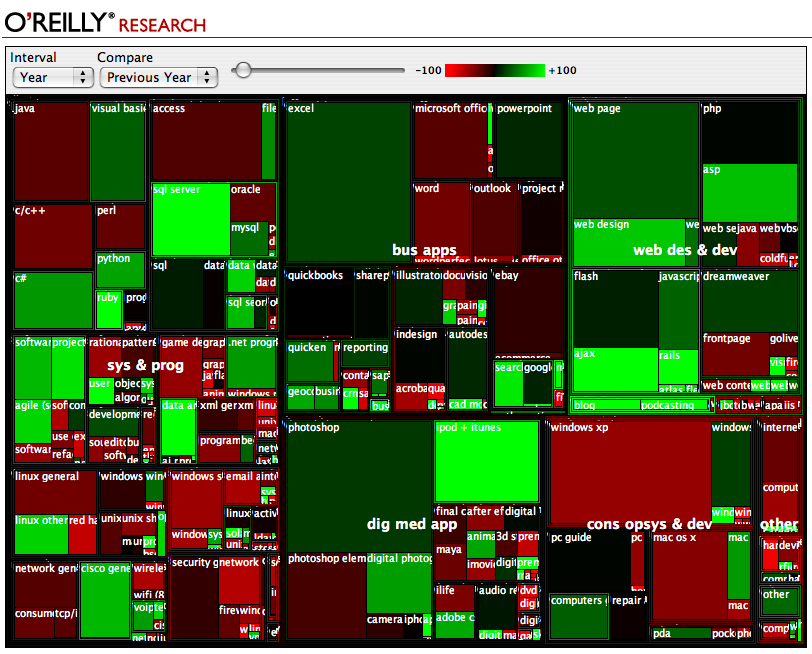 While it’s a bit hard to tell because the treemap layout algorithm doesn’t put the boxes in the same place as the data changes, it appears to me that Q4 shows a lot more small categories taking a bigger relative share of the market, while for the year as a whole, we see somewhat fewer, larger categories. I’m not quite sure what to make of that, and will try to do a bit more thinking about that, and report back.

Next up: A Closer Look at Winners and Losers by Category