Top-level views of the overall book market and the computer book market.

Since last year’s State of the Computer Book Market posts, the Tech Book market has been going through some major changes, but none more profoundly affecting our industry as Borders Group Inc (BGI) going out of business. Much of what you will see in the 2012 trends are directly related to BGI’s demise, though the faint signals that the book market provides to other industries are still evident.

You can get a quick refresher on how we see Computer Book Sales as a Technology Trend Indicator and our other posts on the State of the Computer Book Market.

The data in the posts that will follow, are from Bookscan’s weekly top 3,000 titles sold. Bookscan measures actual cash register sales in bookstores. Simply put, whenever you buy a technology-oriented book in the United States, there’s a high probability it will get recorded in this data. There are now two major Retailers in Tech books and they are: Barnes & Noble, and Amazon and they make up the lion’s share of Bookscan’s recorded sales.

Before we get to the specifics of the computer book market, let’s get some context by looking at the whole book market for the week ending December 25, 2011. Everything that is printed, bound, and sold as a book, from Steve Jobs and Heaven is for Real: A Little Boy’s Astounding Story of His Trip to Heaven and Back to Diary of a Wimpy Kid: Cabin Fever and StrengthsFinder 2.0 is represented in the table below.

As you can see, the computer market is up about 2% from last year which is much better than the whole market being down more than -9%. It should be noted that the computer book market makes up only about 1% of total unit sales in bookstores and online retailers. Also, for this report and the following four posts, I am using a data that is aggregated from weekly reports of the Top 3000 titles in Bookscan. So the numbers for all the long-tail titles are not included here. In other words the data in the table above shows a 2% growth and yet our top 3000 data shows a 0.7% growth. This actually means that a considerable number of long-tail titles sold in 2011 yet did not make it past the minimum threshold to make a weekly top 3000 report. If you would like to see the performance of the major book categories, this table shows percentage growth. I find it interesting that the Religion/Bibles category is the largest-growing category in an otherwise depressed market. Only 10 out of the 47 overall categories showed growth in 2011 and the computer category was one of them. We’ll look at precisely what fueled the growth for the computer category in future posts.

Now on to the technology book market. The four charts below provide some perspective into how each year stacks up against prior years from a Units and Title Count as well as Average Pages per book, and Average Price per book. The third and fourth charts provide context to how many new Titles were published during a given year and what the threshold was to make the Top 3000 report on a weekly basis. The chart on the top left shows the overall units sold per year with the Red Line showing the number of distinct titles that made the Bookscan Top 3000 weekly report. Looking at the two together provides a better insight into what happened. Basically as fewer units were sold, it looks as though more titles were published. Yet as you can see in the chart at the bottom of the four charts, there were fewer new titles in 2011 that contributed to the total units sold. So this leads me to believe that the numeric threshold to get into the dataset of the Top 3000 titles sold on a weekly basis was lower than previous years. And in fact the bottom right chart shows this was the case as 2011 had the lowest threshold in all years measured. So fewer books made the data with fewer of them being new and they had fewer pages and were priced lower on average than ever before. And yet the market showed a slight increase, so this must have come as a result of a few stellar performers that were likely titles published before 2011. We’ll explore this in the coming posts, so hang on to this thought.

Immediately below is the weekly trend (from the Top 3000 titles reported weekly) for the entire computer book market since 2004, when we first obtained reliable data from Bookscan. Please remember that the data represents all publishers, and not just O’Reilly. The slightly thicker red line represents the 2011 data. 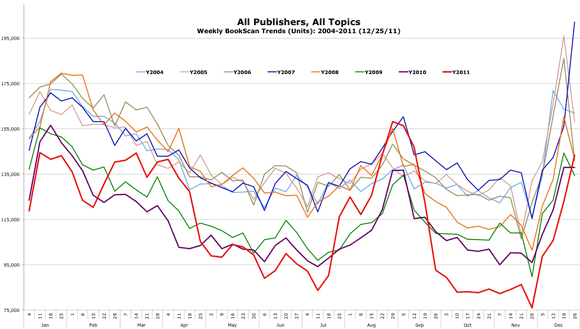 The clear seasonal pattern that we’ve pointed out before still exists, but with more extreme fluctuations. That is, we have a strong start that declines through the summer, spikes for the fall “Back to School” season, and finishes the year strong. And each subsequent year closely mirrors the year before but with usually a percent tick or two lower. But the biggest news for 2011 was that we had some weeks that were clearly above prior years and one week that was the highest we’ve seen for all the years. However, this boon comes through the unfortunate Borders fire sale, and then the eventual liquidation of their remaining inventory. In my opinion, it is too early to predict what long-term effect we will see with Borders gone, because as you’ll notice as soon as their doors closed, the market hit bottom. Not only did it hit bottom, but the market tanked further down than we have ever seen it. But the reason I still think we are not in a pattern of predictability yet is that the December climb up was higher than the four previous years. So in a nutshell, 2011 was a year of our highest highs and our lowest lows and that was likely due to the Borders situation.

So what about that market was news in 2011 other than Borders? In 2011, There were 21 weeks in the year that were ahead of the same week in 2010. In 2010 there were 11 weeks that were ahead of the prior year unit sales and in 2009, there were only two weeks that were ahead of the prior year. I am not willing to state that we are seeing a recovery in the market because a .7% growth is not exactly a strong signal in the right direction. To the optimists in the crowd, it appears as though we have seen bottom in October through November of 2011 — but pessimists will believe that they’ve seen this before: the market looks as though it hit bottom, but then takes another big hit downward. 2009 (the green line) was a turbulent rollercoaster ride to the bottom as well. So at this time the market is really too unstable to predict whether it will move down again or continue to recover.

Another way to look at the market is with the Treemap visualization tool. This tool helps us pick up on trends quickly, even when looking at thousands of books. It works like this:

The size of a square shows the market share and relative size of a category, while the color shows the rate of change in sales. Red is down, and green is up, with the intensity of the color representing the magnitude of the change. The following screenshot of our treemap shows gains and losses by category, comparing the fourth quarter of 2011 with the fourth quarter of 2010. 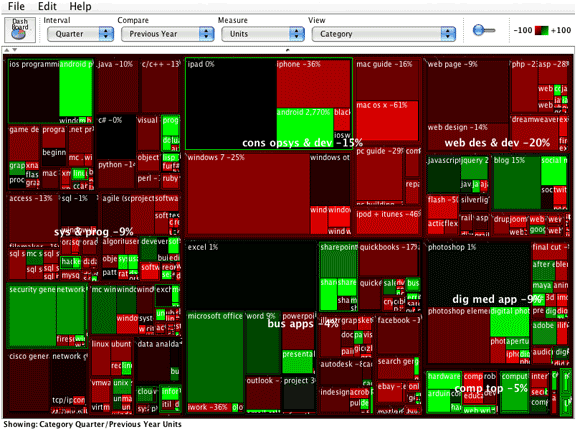 So what are all the boxes and colors telling us? First remember that this is compares the last quarters of the previous two years.

There were quite a few bright spots (bright green) during the last quarter of 2011. Take a look at Android Programming (in the upper-left box), the bright-green box showing growth from the fourth quarter of 2010. Right next to Android is iOS which is larger in size, but Black which means flat growth. You will also see Android again in bright-green (upper-middle box) — the difference is that the upper-left is for programmer-oriented books and the upper-middle is for Android consumer books [using your Droid]. Both had impressive growth in 2011 compared to 2010. In the upper-middle area is iPad and iPhone for consumers which where flat or down. I wonder if the iPhone 4GS was as big of a hit as the iPhone 4. The iPad, the upper-middle big black square, continues to impress with how big the box is at this early point in its evolution, and is flat because both years have netted lots of units sold. Look at Windows 7 just below iPad and notice that the iPad size is about 3/5 as big as Windows 7. That is amazing to me, as the iPad has grown to be almost as big as the business desktop operating system.

In 2010, Windows 7 was the number one growth area for units, followed by iPad, then Android (for consumers), and Android programming. This is unit growth, and a bit of the success for these technologies is that they are fairly new and do not have large market shares as a base to be measured against Looking at longer-established technologies, Security and Network Security and Digital Photography had strong unit growth.

I find it useful to organize the trends into classifications that are High Growth Categories bright green, Moderate Growth Categories dark green to black, Categories to Watch all colors, and Down Categories red to bright red. Most of these descriptions are self-explanatory, except perhaps Categories to Watch. This group contains titles that we’ve found are not typically susceptible to seasonal swings, as well as areas on our editorial radar. If there are categories you want to get on our watch list, please let me know.

The table below highlights and explains some of the data from the chart above, although the data is for all of 2011. The Share column shows the total market share of that category, and the ROC column shows the Rate of Change (RoC = (current_period – prev_period) / prev_period). So, for example, you can see that Mac OS books represent 2.79% of the entire computer book market, and were shrinking by -7.49% (RoC).

Post 2 in this series will provide a closer look at the technologies within the categories. Post 3 will be about the publishers, both winners and losers. Post 4 will contain more analysis of programming languages, and Post 5 will look at digital sales.