PayPal launches a card reader, AmEx teams with Twitter, and the smartphone tipping point is mere months away.

These commerce stories caught my attention this week.

PayPal Here: A triangle vs a Square? 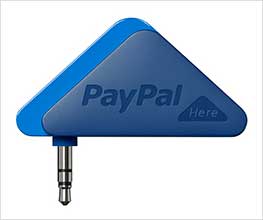 PayPal capped a busy week by unveiling its new Here service, which allows merchants to swipe credit cards through a dongle plugged into a smartphone. PayPal Here introduces yet another shape to the payment dongle iconography: we’ve seen sleeves, tubes, semi-circles, the Square, and now PayPal’s blue triangle. (Any similarity to Sabre’s tablet is, we’re sure, entirely coincidental.) In its launch statements, PayPal highlighted the differences between its service and Square’s: in addition to credit cards, the service lets a merchant take PayPal’s card (which the buyer can link to their bank account or credit card), or photograph and deposit checks. PayPal undercut Square’s 2.75% fee for transactions by .05% and offered a debit card to businesses that returns another 1%.

How serious of a competitor is Square to PayPal? As SplatF’s Dan Frommer noted in a recent post, Square is riding a steady growth curve and has helped merchants process sales for $4 billion worth of goods. But PayPal processes that much volume every two weeks, thanks to a 12-year head start. In its rollout today, PayPal reminded competitors and customers that there are more than 100 million PayPal users, and it emphasized its strong trust ratings among consumers. (A survey by Ogilvey & Mather last summer rated it just below the big three credit cards as a name consumers would trust to handle their mobile transactions.)

Earlier in the week, PayPal’s VP of global product and experience, Sam Shrauger, showed off improvements to its mobile wallet at SXSW, and posted a handheld video of a demo. Shrauger’s 17-minute video details a lot of the new features, but one in particular may give it an edge on the current competition: you don’t need to own a Nexus G 4S to play.

Will they always feel so forced, these social media tie-ins? Sometimes they feel like a shotgun wedding between the gruff old capitalist with money to throw at this “social media business” and the ingenue web service who is looking for some way to pay the rent.

American Expressed has teamed with Twitter to offer discounts via hashtags such as #AmexWholefoods and #AmexVirginAmer.

The latest example: American Express has partnered with Twitter in an ongoing promotion that asks you to sync your AmEx account with your Twitter account (easy enough) and then tweet AmEx deal hashtags (uh, what?) so everyone who follows you can see you’re trying to save $5 at McDonald’s. Maybe that’s not fair: AmEx being the card for aspiring millionaires, the credit card equivalent of the BMW 300 series, there are better offers — from Virgin America and Whole Foods, for example. But we have to wonder: Does asking customers to pre-announce their intention to use a coupon jibe with AmEx’s upscale image?

American Express had already taken steps to define itself as the social credit card, as Austin Carr points out in Fast Company. Its tie-in with Foursquare a year ago at SXSW put it at the pioneering edge of geo-commerce, and AmEx followed up by increasing the number of offers available through the check-in service. This partnership with Twitter is a logical next step, but the overt act of tweeting a coupon hashtag requires a bit more effort than the Foursquare check-ins. (Not much more, mind you, but a little.)

Since there don’t appear to be any restrictions on the number of followers you’re tweeting to, one likely outcome is that bargain hunters will set up a separate Twitter account for blasting out AmEx hashtags to two or three followers: AmEx, your wife, and maybe your bargain-hunting aunt. On the other hand, friends and followers may quickly learn to overlook the slightly spammy tags, and might even appreciate the tip. I know that seeing #AmExThreadless or #AmExApple rip by would prompt a quick search on my part.

The small team at Finnish market analysis firm Asymco has pulled together another package of clean infographics that show where the smartphone market has been and suggest where it’s going. Visualizing data from comScore’s January 2012 report on U.S. mobile subscriber share, Asymco’s exhibits show that U.S. consumers were picking up about 767,000 new smartphones a week — interrupted by the aberrational purchase of nearly twice that many iPhones during the December holidays. Asymco’s Horace Dediu notes that nearly 35 million U.S. users switched to smartphones last year and he predicts that smartphone market share will tip over the 50% mark on (the envelope, please) … June 28, 2012.

Looking at the shift in market share, the story is no longer really the wild growth in the share of Android phones, which dominated headlines last year. Now, the iPhone’s staying power seems an equally impressive story. Certainly its ability to maintain growth (at the expense of RIM’s Blackberry) is due in large part to its ability to create huge cultural events out of the release of every version of the device, conveying the urgency to upgrade or purchase — even if the reasons for doing so are soon forgotten. (Is anyone still flirting with Siri?) The fragmentation of the Android market makes that kind of event practically inconceivable on the Android side. But that same fragmentation contributes to Android’s market share dominance, given the competition among handset manufacturers to deliver capable smartphones that can be sold for $100 or less.