How Zipcar technology is leading to leaner government.

One of the most dynamic sectors of the sharing economy is the trend in large cities toward more collaborative consumption — and the entrepreneurs have followed, from Airbnb to Getable to Freecycle. Whether it’s co-working, bike sharing, exchanging books and videos, or cohabiting hackerspaces and community garden spaces, there are green shoots throughout the economy that suggest the way we work, play and learn is changing due to the impact of connection technologies and the Great Recession.

This isn’t just about the classic dilemma of “buy vs. rent.” It’s about whether people or organizations can pool limited resources to more efficiently access tools or services as needed and then pass them back into a commons, if appropriate.

Speaking to TechCrunch last year, Lauren Anderson floated the idea that a collaborative consumption revolution might be as “significant as the Industrial Revolution.” We’ll see about that. The new sharing economy is clearly a powerful force, as a recent report (PDF) by Latitude Research and Shareable Magazine highlighted, but it’s not clear yet if it’s going to transform society and production in the same way that industrialized mass production did in the 19th and 20th centuries. 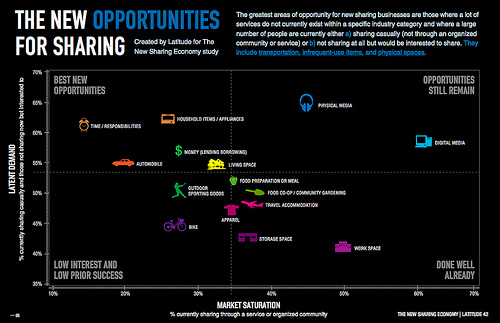 Infographic from “The New Sharing Economy” study. Read the report (PDF) and
see a larger version of this image.

What is clear is that, after years of spreading through the private sector, collaborative consumption is coming to government, and it’s making a difference. A specific example: Carsharing via Zipcar in city car fleets is saving money and enabling government to increase its efficacy and decrease its use of natural resources.

After finally making inroads into cities, Zipcar is saving taxpayers real money in the public sector. Technology developed by the car-sharing startup is being used in 10 cities and municipalities in 2012. If data from a pilot with the United States General Services Agency fleet pans out, the technology could be also adopted across the sprawling federal agency’s vehicles, saving tens of millions of dollars of operating expenses though smarter use of new technology.

“Now the politics are past, the data are there,” said Michael Serafino, general manager for Zipcar’s university and FastFleet programs, in a phone interview. “Collaborative consumption isn’t so difficult from other technology. We’re all used to networked laser printers. The car is just a tool to do business. People are starting to come around to the idea that it can be shared.”

As with many other city needs, vehicle fleet management in the public sector shares commonalities across all cities. In every case, municipal governments need to find a way to use the vehicles that the city owns more efficiently to save scarce funds.

The FastFleet product has been around for a little more than three years, said Serafino. Zipcar started it in beta and then took a “methodical approach” to rolling it out.

FastFleet uses the same mechanism that’s used throughout thousands of cars in the Zipcar fleet: a magnetized smartcard paired with a card reader in the windshield that can communicate with a central web-based reservation system.

There’s a one-time setup charge to get a car wired for the system and then a per-month charge for the FastFleet service. The cost of that installation varies, predicated upon the make of vehicles, type of vehicles and tech that goes into them. Zipcar earns its revenue in a model quite similar to cloud computing and software-as-a-service, where operational costs are billed based upon usage.

Currently, Washington, D.C., Chicago, Santa Cruz, Calif., Boston, New York and Wilmington, Del. are all using FastFleet to add carsharing capabilities to their fleets, with more cities on the way. (Zipcar’s representative declined to identify which municipalities are next.)

Boston’s pilot cut its fleet in half

“Lots of cities have departments where someone occasionally needs a car,” said Matthew Mayrl, chief of staff in the Boston Public Works department, during a phone interview.

“They buy one and then use it semi-frequently, maybe one to two times per week. But they do need it, so they can’t give up the car. That means it’s not being used for highest utilization.”

The utilization issue is the key pain point, in terms of both efficiency and cost. Depending on the make and model, it generally costs between $3,000 and $7,000 on average for a municipality to operate a vehicle, said Serafino. “Utilization is about 30% in most municipal fleets,” he said.

That’s where collaborative consumption became to relevant to Boston. Mayrl said Boston’s Public Works Department talked to Zipcar representatives with two goals in mind: get out of a manual reservation system and reduce the number of cars the city uses, which would reduce costs in the process. “Our public works was, for a long time, administered by a city motor pool,” Mayrl said. “It was pretty old school: stop by, get keys, borrow a car.”

While Boston did decide to join up with Zipcar, public sector workers aren’t using actual Zipcars. The city has licensed Zipcar’s FastFleet technology and is adding it to the existing fleet.

One benefit to using just the tech is that it can be integrated with cars that are already branded with the “City of Boston,” pointed out Mayrl. That’s crucial when the assessing office is visiting a household, he said: In that context, it’s important to be identified.

Boston started a pilot in February that was rolled out to existing users of public works vehicles, along with two pilots in assessing and the Department of Motor Vehicles. The program started by taking the oldest cars off the road and training the relevant potential drivers. Using carsharing, the city of Boston was able to reduce the number of vehicles in the pilot by over 50%.

“Previously, there were 28 cars between DPW [the Public Works department] and those elsewhere in the department,” said Mayrl. “That’s been cut in half. Now we have 12 to 14 cars without any missed reservations. This holds a lot of promise, only a month in. We don’t have to worry about maintenance or whether someone is parked in the wrong place or cleaning snow off a car. We hope that if this is successful, we can roll it out to other departments.”

The District’s fleet gets leaner

While a 50% reduction in fleet size looks like significant cost savings, Serafino said that a 2:1 ratio is actually a conservative number.

Based upon the results to date, Serafino said he expects Washington, DC, to triple its investment in the system. “The original pilot was started by a mandated reduction by [former DC Mayor Adrian] Fenty, who said ‘make this goal,’ and ‘get it done by this date.’ Overall, DC went from 365 to 80 vehicles by consolidating and cooperating.”

Serafino estimated the reduction represents about 50% of the opportunity for DC to save money. “The leader of the DC Department of Public Works wants to do more,” he said. “The final plans are to get to a couple of hundred vehicles under management, resulting in another reduction by at least 200 cars.” Serafino estimated potential net cost savings would be north of $1 million per year.

There is a floor, however, for how lean a city’s car fleet can become — and a ceiling for optimal utilization as well.

“The more you reduce, the harder it gets,” said Serafino. “DC may have gone too far, by going down to 80 [vehicles]. It has hurt mobility.” If you cut into fat deep enough, in other words, eventually you hit muscle and bone.

“DC is passing 70% utilization on a per-day basis,” said Serafino. “They have three to four people using each of the cars every day. The trip profile, in the government sense, is different from other customers. We don’t expect to go over 80%. There is a point where you can get too lean. DC has kind of gotten there now.”

In Boston, Mayrl said they did a financial analysis of how to reduce costs from their car fleet. “It was cheaper to better manage the cars we have than to buy new ones. Technology helps us do that. [Carsharing] had already been done in a couple of other cities. Chicago does it. The city of DC does it. We went to a competitive bid for an online vehicle fleet management software system. [Zipcar] was the only respondent.”

Given that FastFleet has been around for more than three years and there’s a strong business case for employing the technology, the rate of adoption by American cities might seem to be a little slow to outside observers. What would be missing from that analysis are the barriers to entry for startups that want to compete in the market for government services.

“What hit us was the sales cycle,” said Zipcar’s Serafino. “The average is about 18 months to two years on city deals. That’s why they’re all popping now, with more announcements to come soon.”

The problem, Serafino mused, was not making the case for potential cost savings. “Cities will only act as sensitive as politics will allow,” said Serafino.

“Boston, San Francisco, New York and Chicago are trying. The problem is the automotive and vehicle culture,” Serafino said. “That, combined with the financial aspects of decentralized budgeting for fleets, is the bane of fleet managers. Most automotive fleet managers in cities don’t control their own destinies. Chicago is one of the very few cities where they can control the entire fleet.

Cities do have other options to use technology to manage their car fleets, from telematics providers to GPS devices to web-based reservation systems, each of which may be comparatively less expensive to buy off the shelf.

One place that Zipcar will continue to face competition at the local level is from companies that provide key vending machines, which are essentially automated devices on garage walls.

“You go get a key and go to a car,” said Serafino. “If you have 20 cars in one location, it’s not as likely to make sense to choose our system. If you have 50 cars in three locations, that’s a different context. You can’t just pick up a keybox and move it.”

Zipcar is continuing along the long on-ramp to working with government. The next step for the company may be to help Uncle Sam with the federal government’s car fleet.

As noted previously, the U.S. General Services Agency (GSA) has already done a collaborative consumption pilot using part of its immense vehicle fleet. Serafino says the GSA is now using that data to prepare a broader procurement action for a request for proposals.

The scale for potential cost savings is significant: The GSA manages some 210,000 vehicles, including a small but growing number of electric vehicles.

Given congressional pressure to find cost savings in the federal budget, if the GSA can increase the utilization of its fleet in a way that’s even vaguely comparable to the savings that cities are finding, collaborative consumption could become quite popular in Congress.

If carsharing at the federal level succeeded similarly well at scale, members of Congress and staff that became familiar with collaborative consumption through the wildly popular Capital bike sharing program may well see the sharing economy in a new light.