State of the Computer Book Market, part 4: The Languages

A deep look at the market for books on programming languages.

In this fourth post (see posts one, two and three) on the State of the Computer Book Market, we will look at programming languages and drill in a little on each language area.

To provide some perspective, 2010 and 2011 have been a mixed-bag of results for tech publishing, meaning there were some bright spots with some of the technologies and some definite low areas too. The chart directly below does not include books that are method-oriented, about project management, about consumer operating systems, or books without language-oriented material. So this is a different view of the market than the overall view found in post 1 of this series. You can see all languages on a week-by-week basis while showing that the the languages closely mirrored the overall market found in post 1. In other words, the graph for Languages shows that 2011 was a roller-coaster for languages too. 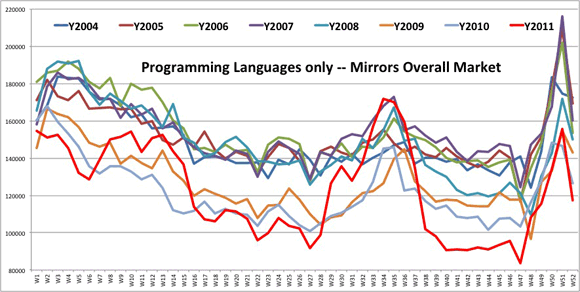 Java continues to be the number one language from book units sold and dollars. There is some shuffling going on with the languages tough. JavaScript is very hot now, as is R. Likely a result of Android and big data driving folks to these languages. Java grew 13.46% or roughly 33,930 additional units in 2011 and JavaScript doubled the growth rate of Java at 27.18% and an additional 61,758 units in 2011. PHP and C++ switched places in 2011 where PHP produced 126,994 units in 2011 and fell to #6 and C++ moved into 5th with 19,207 additional units. Only three languages kept their 2010 ranking, Java at #1, Objective C at #4, and Python at #8. As you can see in the 2010-2011 Top 20 languages chart below, Java has a significant lead in the language race with JavaScript moving up quickly. 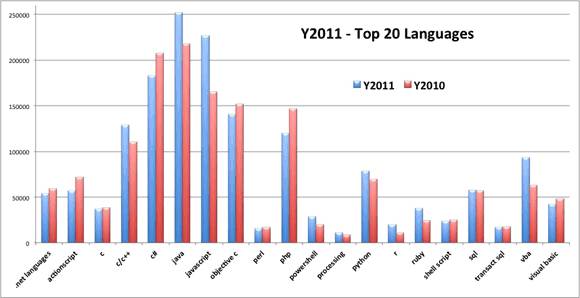 If you look at the chart below, you will see which languages were responsible for the most units sold between 2004 and 2011. The chart is basically the sum of units each year for the respective language. The top ten languages generated unit sales of 10,283,109 for the 8-year period, while the second ten generated 2,910,636 in the same period. The top ten languages represented roughly 72% of units sold during this period. With so many languages to choose from, makes me wonder if any language will every see the numbers that Java experienced in the early 2000 timeframe.

A treemap view of the programming Languages 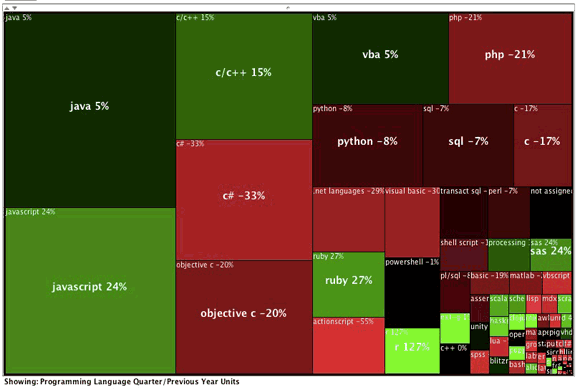 Before we dive in, let’s look at the high-level picture for the grouping of languages. I have grouped these languages by total number of units sold between 2004-2011. As you can see in the table below, the Large and Major languages were up collectively, and everything from Mid-Major and below was down. However books where the language was the focus, ended up 74,688 ahead of 2010 even though the Mid-Major and below lost -15,120 units compared to last year.

For the sake of grouping and presenting this information in a more readable format, we have classified the categories for the languages in this way with the following headers:

The following table contains data for the Large languages. As you can see, 6 of the 11 top languages experienced growth in 2011 and were led by JavaScript impressive growth and Java’s continued strength. Objective-C has experienced a second year of declining units but seems to have slowed the decline. What is up with C++? Why is this language still growing? Is there something going on with devices that is fueling the growth of C++?

Here are the top titles for the Large languages:

You’ll notice in the Major languages that Ruby had the biggest growth among this grouping. And the R language had significant growth and surpassed Perl in sales units. Perl used to be one of the largest languages around and is now ranked #19 among the languages. PowerShell experienced it second consecutive year of growth in 2011.

Here are the top titles for the Major languages.

The news in this set of languages is that 3 of the 11 languages saw growth in 2011 so the grouping as a whole is off by about 18.35%. This is partially due to a couple of the languages moving up to the prior category &#151 most notably R and SAS..

Here are the top titles for the Mid-Major languages.

The news in this category is the growth of functional languages, like Scheme, Scala, Haskell, Alice and Lisp. These languages showed a nice 51.38% growth in 2010 and another 11.17% growth in 2011.

Here are the top titles for the Mid-Minor languages.

This category of languages saw 4 of the 7 languages sell more units in 2011. There was roughly a 1.91% increase in units sold year-over-year. The biggest gains were Puppet and Stata. Even if there was only one book per language in this grouping, it would be hard to financially justify a print product because of economies of scale; unless of course the publisher of a title is selling lots of copies direct on their website or direct to corporations or colleges. The combination of digital and print may help some of the titles below this point actually make more financial sense. My experience says anything below this point is not financially beneficial to the publisher or author, yet there may be other reasons they are in print.

Here are the top titles for the Minor languages.

This grouping of languages saw 12 of the 28 languages sell more units in 2011, although the sales volume is fairly insignificant. But there was significant erosion in this group as it collectively saw a -46.96% decrease in units sold year-over-year. I am not going to list the bestsellers, because they are not exactly bestsellers, by any measure, in this grouping. Here is the list of languages selling more than 100 units and less than 1,000 in order by the most units to the fewest:

Lastly, the following languages sold fewer than 100 units in 2011. Here is the list in descending order:

The following languages did not see any units sold in 2011. Here is the list in alphabetical order:

Next up, post 5 in this series will look at digital sales.