PayPal snags two big partners, NFC is in the "Trough of Disillusionment," and a look at mobile commerce trends.

Here are a few stories that caught my eye this week in the commerce space.

The race is on

Earlier this month, mobile payment company Square teamed up with Starbucks to bring mobile payment to the coffee mogul’s 7,000 locations and millions of customers. This week, PayPal stepped up its game with two announcements. First, according to a report at Reuters, the company confirmed rumors that it’s running a mobile payment test with fast food giant McDonald’s at 30 of its locations in France.

Alistair Barr describes the program in the Reuters report, explaining that customers can order lunch on their smartphones or online, pay with PayPal, and pick up their orders in a separate line. McDonald’s has more than 30,000 locations worldwide — landing this partnership not only could catapult PayPal ahead of Square in the mobile payment race, but it will bring mobile payments to the everyday lives of the masses, further mainstreaming the idea of mobile wallets and mobile payment.

Upping the ante further, PayPal also announced a partnership with Discover that, according to Ryan Kim’s report at GigaOm, will bring PayPal payments to some seven million U.S. merchants. Through the deal, Discover will integrate PayPal’s payment system into its point-of-sale software, which alleviates involvement and investment from merchants. During its launch, planned for April 2013, the system will be a bit clunky, but it’s expected to smooth out quickly thereafter — Kim reports:

“At launch next year, PayPal users will be able to pay with a PayPal Access Card, which connects to a PayPal account and can be funded from a bank account or credit card. Users will be able to use the card in conjunction with a PayPal mobile wallet app, which will deliver e-receipts, offers and other services. But a few months later, PayPal users will be able to pay directly through point-of-sale terminals by entering in a PIN or phone number or by authorizing a payment through their mobile app after sharing their location with the merchant. That will eliminate the need for any cards or traditional wallets and will enable consumers to get the benefits of a digital wallet to receive offers, track spending and tap into loyalty programs.”

Jon Worley, director of business development and customer interaction at The Logic Group, wrote a guest post at InternetRetailing this week, looking at the real business value of mobile wallets. Worley argues that the value isn’t in offering a convenient payment service to customers, but in the potential for increased consumer interaction:

“The mobile wallet enables the collection of valuable data to create customer interaction opportunities for retailers, marketers and advertisers. These interactions can include in-store customer loyalty programmes, vouchers, or location based services for customers. For example, with an NFC-enabled mobile phone, a customer can tap a poster or product label to view promotional and product information as well as offers and complimentary items for cross selling.”

Worley says one of the major pain points for the market right now is the slow adoption of NFC in mobile phones, but if the newest edition of the annual Gartner Hype Cycle report is correct, NFC technology is at the end of its hype and is now experiencing the “Trough of Disillusionment” on its way to the “Slope of Enlightenment.” Dan Rowinski at ReadWriteWeb took a look a the report results and the estimation that NFC will reach ubiquity, or the “Plateau of Productivity,” within 2 to 5 years. 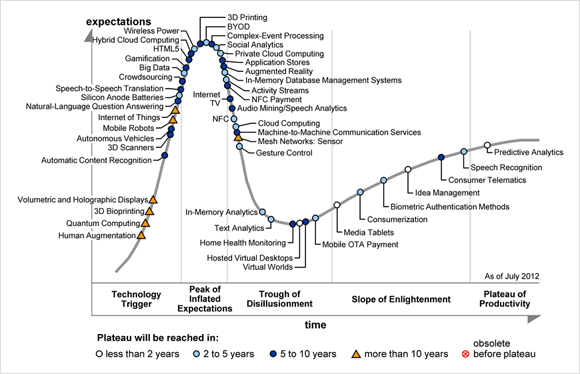 Rowinski says the major hurdle of getting NFC technology into the phones, and therefore the hands of consumers, is being solved fairly quickly, as most new smartphone model releases include NFC. He points out, though, that the solution to the secondary growth hurdle isn’t going to be so straightforward:

“As we have seen, the mobile payments industry is more or less a mess. There are too many competing interests with competing products and standards, none of which are being wholeheartedly embraced by consumers. NFC is trapped in the middle of the mobile payments sector. This is what it is like being in the Trough of Disillusionment.”

Mashable’s Kate Freeman took a look this week at an infographic created using results from a new report from Monetate on where mobile commerce is headed, with highlights from the iPhone-Android battle. Freeman reports that Monetate’s data was gathered by analyzing more than 100 million online shopping experiences. A few interesting data points include:

According to Invodo research, mobile shoppers are three times more likely to click and view the video than desktop or laptop users. Internet Retailer reports that those that view a video are 144% more likely to place that item in a shopping cart. And, 52% say that watching the video makes them more confident about their purchasing decisions (read: fewer returns).

Citing a report from Comscore, Travios also reports that “e-commerce visitors who watch a video are 64% more likely to make a purchase than those that don’t.”